I’ve been watching some Adventure Time, and it occurs to me what an interesting stance it seems to take on mental illness and cognitive disabilities.

I’m particularly interested in the characterization and portrayal of Lemongrab and his clone.

Behold: the test-subject that launched one thousand neurology papers. Or at least, that should.

A Short Description of the Earl of Lemongrab

It seems very clear that Lemongrab is meant to represent people on the Autism Spectrum. He is without empathy and seems to view other characters as faulty tools rather than fully realized people. He is extremely tense, obsessive and unable to function when people do not immediately comply with his orders. He distinctively speaks in a loud, piercing monotone which has no variability with the situation, and his language seems to be more of a running narration than an attempt to communicate with others. He is needlessly cruel to his subjects without any apparent understanding of their subjective experience.

In some episodes he is accompanied by a clone which Princess Bubblegum created to keep him company. There is no meaningful difference between the two Lemongrabs; for all intents and purposes they are the same character, and I will treat them as a single entity.

He is the Frankenstein-esque product of scientific error in Princess Bubblegum’s experimentation.  Many of his stories are the story of Princess Bubblegum trying to cope with the challenges of having a cognitively impaired child whose inability to function normally constantly hurts himself and others, and the frustrations of this task. 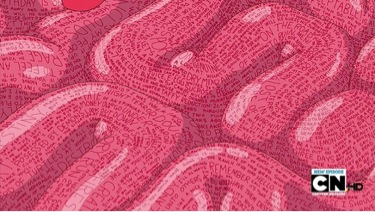 Follow me as me dive deep into the twisted mind of a lemon. Enter the Heart of Citrus.

Lemongrab is obnoxious and frustrating to deal with, but this alone is insufficient to make him an antagonist except to the most ruthless of ableists. Let me give a representative example of a plot where he is pitted against our heroes, Finn and Jake:

In the episode “It’s all your fault”, the Lemongrabs learn the Princess’s secret of turning inanimate candy into living creatures, and immediately develop a compulsive need to animate any piece of candy material they can get their hands on. They quickly exhaust their entire food supply, leaving them with a castle full of nightmarish sentient monstrosities and no food. Obviously, these creatures are no sooner created than they are plunged into a Malthusian crisis and inevitably degenerate into cannibalism. When Finn and Jake arrive with an emergency supply of precious candy seeds to build an agricultural base to feed the starving masses, the staving Lemongrabs waste no time… in turning their last hope for survival into a living, vomiting wad.

Deciding that their actions are the Princess’s fault (for accidentally allowing them to learn how to animate candy) they command their giant Lemongrab-y monster to seize all the candy in the Candy Kingdom by force.  The monster (which acts very Lemongrab-y) is stopped by a kind of blunt-force heart surgery which causes it to suddenly feel empathy and do what was necessary to end a candy-humanitarian (sucrositarian?) crisis by committing suicide and allowing its body to feed the starving masses.

What happens next is very curious indeed: When the suggestion is made to Princess Bubblegum in the next scene to fix the Lemongrabs the same way, she responds “their hearts are fine – they’re just like this.” Dismissing out of hand the possibility of “fixing” them, her solution is simply to keep them under closer supervision.

This pattern is repeated in many instances where the solution to problems caused by Lemongrab (and sometimes his clone) harming others is to accommodate them in a way where they can be happy. The key thing to note here is that they are always treated as beings with a right to exist and an effort is always made to make them happy. 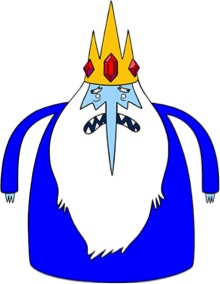 Compare this to how the Ice-king is treated when he causes trouble with his similarly obsessive behavior. He also behaves in extremely selfish and antisocial ways, and is also completely deluded about other people’s regard for him, acting shocked when people react negatively to his obviously destructive behavior. We even know that he was once a kind, friendly human named Simon who had a fiancé and saved Marceline as a child during the Mushroom War. He was slowly turned into the Ice King by the crown, and even begged all who would listen for mercy for what he might do under its influence.

He is treated as an object of derision and contempt by all (except Marceline… kinda) even after his tragic origin story is revealed to Finn and Jake. In their future encounters they show no pity for him, make no accommodations, and never attempt to make his lonely existence less bleak.

The UNACCEPTABLLLLE Answers (for people who like being wrong)

One possibility lies in the fact that only one of them has their creator still living. Both are the unwanted and embarrassing creations of smart and caring people, but the Ice King’s creator, Simon, was destroyed in the Ice King’s creation, leaving no one to care for him, curb his excesses, and advocate for his wellbeing.

If Princess Bubblegum wasn’t Finn and Jake’s friend, what are the odds that Finn and Jake would be so willing to accommodate Lemongrab, even after he creates monstrosities, imprisons innocent people for being minor inconveniences and even tries to brainwash 3 children through prolonged torture simply because he didn’t understand them and believed they should be his slaves?

Or for that matter, attempting to eat other fully conscious beings alive in order to solve rather minor problems? (Which he has done on at least 3 occasions, by my count.)

Ice King may be a delusional stalker/kidnapper, but does anyone ever try to find him companions the way Finn, Jake and Princess Bubblegum try repeatedly with Lemongrab? Perhaps Simon would if he were still around.

Another possibility is in the fact that Simon chose to put on the crown and become what he became, while Lemongrab had no say in his own creation. Under this reading, the Ice King’s sadness is penance for the actions which made him what he is, while the problems caused by Lemongrab’s existence are borne as penance by Princess Bubblegum for her mistakes. Lemongrab has no responsibility for what he is, so punishing him would be a cruel injustice. This is lampshaded in the episode “All Your Fault” when the Lemongrabs blame others for giving them the opportunity to make the mistakes that they were inevitably going to make (turning their lifetime’s food supply into an army of starving candy monstrosities).

There is a third possibility here, which is that this whole thing is a subtle commentary on the politics and public perceptions of cognitive impairment and mental illness. Lemongrab appears to have what we can easily recognize as a common, diagnosable and widely known cognitive impairment (Autism) which shifts the perception of responsibility for his actions. If there is a clinical name for why he does what he does, then these actions are not perceived as originating from him but from the impairment. He becomes dissociated into two entities, the person and the problem (much as Lemongrab becomes two separate people), and this distinction gives him an excuse, at the expense of robbing him of agency in the eyes of others.

Ice King, on the other hand, fits the profile of a person who we would describe in non-clinical terms: weird, creepy, delusional, a loser. Note that these are not descriptors of underlying causes which can explain behavior. They are the products of him acting in accordance with his nature. He is treated as an agent, a coherent whole who really is acting in accordance with his true nature – it just turns out that his true nature is a bad person.

This is, of course, a ridiculous distinction. Both of them act according to their personalities and environment, and while there may be causal explanations as to why they act as they do, this does nothing to evade the obvious fact that they are agents (insofar as anyone is an agent) who have their own natures which are revealed through their actions. Their actions are ultimately traceable to their environments and their priorities as people.

There is very little to justify this distinction between personality and pathology when it is examined in any depth, but it matches up almost perfectly with our real world perceptions. How many times have you heard someone say something akin to “He’s not a jerk, he just has Asperger’s Syndrome” and felt like that “explanation” contained meaningful semantic content?

Adventure Time sees this phenomenon and exposes it for the exercise in question begging that it is: Asperger’s Syndrome is merely the name which we give to a group of people with certain habits and capacities of thought. Some are jerks, some are nice, but giving it a name goes nowhere towards explaining what it is.

Lemongrab’s treatment with kid gloves is, in my opinion, one of the cleverest satires of public perceptions of mental pathologies and agency in all of pop culture.

Have a different interpretation? Wanna tell me I’m wrong? UNACCEPTAAAABBBLLLEEE!!! Leave it in the comments! 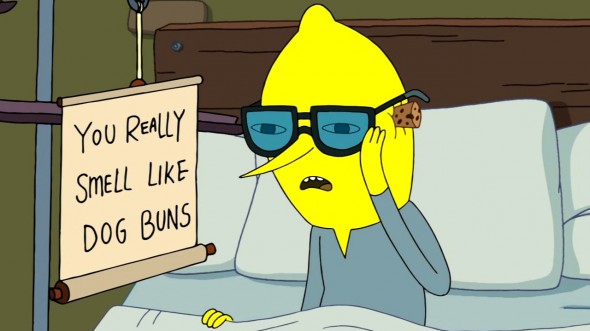 Daniel Elliott has nothing to pimp right now, but he is collaborating on awesome secret projects with Jesse Richardson, internet famous for many things including yourlogicalfallacyis.com which is an invaluable resource for thought of both the “over-“ and appropriately calibrated varieties, as well as generally demonstrating why people on the Internet are wrong.