Last week, Rolling Stone published an interview with Steven Michael Quezada, better known as Agent Gomez on Breaking Bad, ASAC Hank Schroeder’s Chicano foil. In the interview, Quezada talked about his background in stand-up in the New Mexico area. Reading it, I remarked that that makes a lot of comedians getting work on Breaking Bad, shortly before Quezada said the same thing:

There’s a lot of comics on Breaking Bad. I’m performing at Loonees in Colorado this weekend, and [comedian] Bill Burr [Saul’s henchman Kuby] is going to be performing in Colorado, too. Lavell [Crawford, Saul’s bodyguard Huell] is a comic. Bob [Odenkirk, Saul himself] comes from a comic background. Javier Grajeda, who played the Mexican cartel guy, is a stand-up comic. Why are we casting all these stand-up comedians to do Breaking Bad, one of the most dramatic TV shows ever?

He missed Bryan Cranston, who, though not a stand-up, made his bones in comic roles on Seinfeld and Malcolm in the Middle. That’s a remarkably funny cast for such a dark show.

We’re no strangers to comedians in serious roles in this century – Bill Murray in Lost in Translation, Robin Williams in Christopher Nolan’s Insomnia, Adam Sandler in Punch-Drunk Love. But those actors are also draws in their own right. Telling audiences that Robin Williams is a murderous mastermind is a good gimmick, a bit of stunt casting, although that term feels dismissive given how good a job he did with the role. There is, of course, value in putting a comedian in a serious role, and I’ll touch on that below.

But that’s clearly not what the producers of Breaking Bad were going for with these characters, because none of the actors are huge names. Bob Odenkirk is perhaps the most famous, primarily for a sketch show he did on premium cable eighteen years ago. Second most is a writer for Chapelle’s Show. So Gilligan wasn’t casting these guys for name value.

What’s the point, then? Why cast a comedian in such a darkly serious show, especially if you’re going to put them in fairly straight roles? Lavell Crawford (Huell) barely had any lines before this season. Bill Burr (as Kuby) was mostly played serious. Grajeda doesn’t have a single laugh line (although the estimate he gives Giancarlo Esposito of his ability to survive, while over the phone, is certainly ironic). So what is the value of casting them as serious characters?

Understanding this requires understanding the nature of humor. This is never as fun a business as it sounds. “Humor can be dissected, as a frog can,” observed E.B. White, author of Charlotte’s Web, “but the thing dies in the process.” But we can’t keep paying rent on the TLD unless we overthink things to the point where they’re no longer fun, so we soldier on heedless.

Humor is, in the abstract, a reaction to the absurd or unexpected. We’re presented with a scenario and, as conscious creatures, we play out a number of potential future scenarios, a light cone of limited possible futures. Something happens that shatters our expectations – a man trips, upending a tray of guacamole onto his jacket – and we laugh in shock. It’s the shock, the act of surprise, that triggers the smile and the guffaw. If you doubt that that’s the cause, recall any time you’ve been put off by some mad stranger or some troublemaking asshole getting in your business at a bar, and an involuntary smile has crept on your face. You’re not smiling because you’re delighted; you’re smiling because that’s your reaction to being put on your back foot.

Humor is a perfectly natural reaction to a shock to the senses. But so is horror. We read about Victor Frankl’s experience in Auschwitz, where a line of prisoners was divided arbitrarily by a guard (one, two, one, two), with half being sent to the gas and half living, and we recoil. This is no way for humans to live; this is absurd. Our first instinct would not normally be to laugh at this. However, if we’re creative types, we could conceive a savagely dark comedy sketch, a sort of office-satire brainstorming session, in which this solution is being conceived (“uh, Hauptmann? Why don’t we just have a guy count them off, one two, one two?” “Don’t be ridiculous, Muller! Where’s the science in that?”).

Humor is a way of saying “nope, this isn’t normal.” But to depict humor onstage, or in front of a camera, is legendarily hard. You have to create a scene of such verisimilitude that the audience’s expectations are guided into a predictable path. You have to create a character who behaves in such a plausible way that the audience begins envisioning possible outcomes. Then, you need to disappoint those expectations in just such a way as to get the audience laughing. That’s really hard! Having a cat jump out of a closet just before the serial killer appears is much easier.

The elements required to build all this are numerous, tricky, and disparate: content, timing, tone, delivery, and so forth. It’s a safe assertion that, if you’re really good at comedy, you have a decent understanding of the human condition and humanity’s place in an ambivalent universe, and if you can pull that off you’ll be great in the postmodern / hyper-existential drama that makes weight in this century. If you can make yourself the butt of a joke, you can play a victim – roles that Bill Murray and Adam Sandler played excellently in Lost in Translation and Punch-Drunk Love. If you recognize the nature and limits of power, you can play an officious asshole, like Bill Burr did in his first few appearances as Kuby. And if you can react to a culture that relies on your labor yet mocks your heritage with grace and wit, you can play Agent Gomez, who chuckles under ASAC Schroeder’s barbs but shows up to work every morning and gets shit done.

Is casting a comedian required? Not necessarily. But if your dark work of art is really plumbing the depths of existential postmodern despair, you want someone who’s already looked into that abyss and come away chuckling. You want your Murrays, your Sandlers, your Williams, and, of course, your Quezadas. 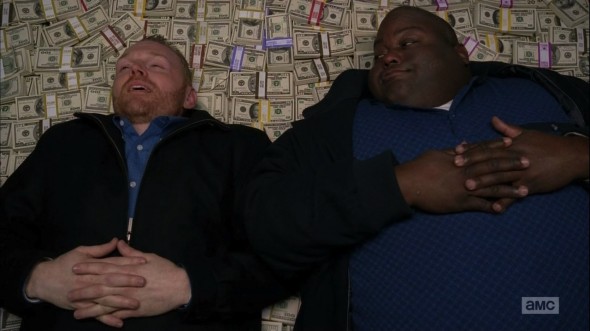 2 Comments on “Breaking Bad: Send In The Clowns”