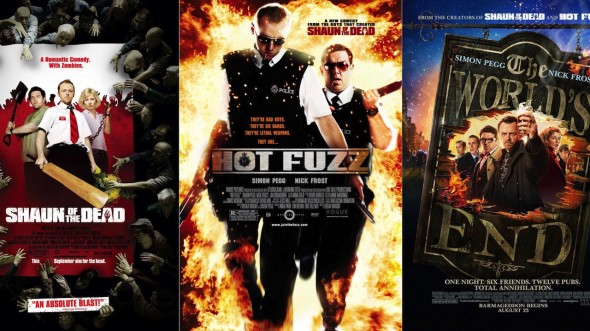 Shaun of the Dead. Hot Fuzz. The World’s End. These movies make up the Three Flavors Cornetto Trilogy, and they share more in common than the creative team of Simon Pegg, Nick Frost, and Edgar Wright.

They all tell the story of the Monomyth, otherwise known as the Hero’s Journey:

A hero ventures forth from the world of common day into a region of supernatural wonder: fabulous forces are there encountered and a decisive victory is won: the hero comes back from this mysterious adventure with the power to bestow boons on his fellow man.

-Joseph Campbell, The Hero with a Thousand Faces

Not familiar with this concept? Long story short, it’s a narrative structure that’s shared by many of our most memorable stories, from Gilgamesh to Star Wars. Some follow this structure on purpose; others by accident. Take a few moments to review the Wikipedia article and orient yourself to the seventeen stages. If you’re still a little fuzzy about what these stages look like in modern movies, check out this mapping of the Star Wars and Matrix trilogies to these stages as well.

Now, are you ready to Cross the Threshold and see how this maps to the Cornetto Trilogy? Probably not, because this is pretty insane. But here it is anyway (click for even larger version):

A few important things to keep in mind while reading this:

So what this all mean? In a nutshell, the Hero’s Journey effectively functions as a satirical element of these movies. Part of the satire may be in calling out the frequent usage of the Hero’s Journey in genre movies, but to me, most of the satire lies in the movies’ implicit reminders that achieving self-actualization and escaping from the mundanity of daily life is actually harder than what we see in these genre movies. Lacking a call to adventure, a crossing of a threshold, or an ultimate boon, we have no structure to defeat the real forces of conformity and mundanity in our lives. They may not be zombies, psychotic villagers, or robots, but they’re real, and that makes them more fearsome enemies than anything a storyteller can throw against a hero.

Readers: what do you think? Do you have any suggestions for better ways to map the movies’ plot points to the Hero’s Journey? Do you think the Hero’s Journey acts as a satire in the Cornetto Trilogy, or is it just a convenient way to tell a good story? Let me know in the comments!

6 Comments on “Shaun of the Fuzz’s End: The Three Flavours Cornetto Trilogy and the Hero’s Journey”