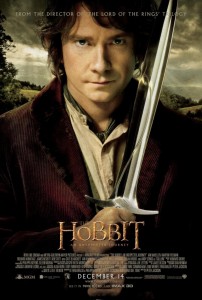 [Update: Part 2 of this analysis, “The Desolation of Statistics,” is now available!]

I know I’m late to this party, but I finally got around to seeing The Hobbit: An Unexpected Journey after hearing much belly-aching over how the story of a single book is split into three separate movies: it seems like a blatant cash grab by the studios, a cynical move that put franchise movie economics ahead of things like storytelling and pacing.

After seeing the movie, I can definitely sympathize with these complaints. It felt slow at times, particularly during the multiple expository scenes in the first half and the interminably long action sequence in the second half. Most importantly, I felt like the story didn’t advance far enough to justify taking up an entire movie on its own, especially compared to the Lord of the Rings movies.

So me being me, I decided to put this issue into quantitative terms. Specifically, I wanted to compare the length of the Hobbit movie to that of the source text, and run the same analysis for the three Lord of the Rings movies.

For movie length, I simply used the run time for the theatrical version of the movie as listed on IMDB. For book length, I chose to go with word count rather than page count, since there’s so much variability when it comes to the number of words that get squeezed onto a single book page.

Before I hit you with the graphs, I should mention the obvious caveat, which is that a long word count of a book does not necessarily translate to more story elements that need to be crammed into a movie. Also, it’s been a while since I’ve read the various works of J.R.R. Tolkein, so I can’t speak authoritatively to the density (or lack thereof) of plot in those books.

All this is to say that word count is an imperfect proxy for the amount of plot-related content in a book that might need to get translated to a movie. 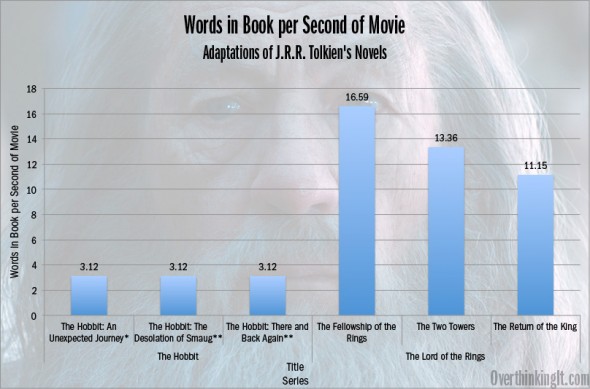 *To simplify things, I divided the total word count for The Hobbit (95, 022)by three and used that count for each of the three Hobbit movies (31,674)

So what does this graph tell us? That, in a strictly quantitative sense, the three Hobbit movies are laughably lacking in density of source material presented on screen compared to the three Lord of the Rings movies. This really shouldn’t be surprising, given that the rest of the internet was able to intuit this on their own and complain about it without the use of a graph like this. But I wanted to go through this exercise as a way to lay the groundwork for a broader consideration of how books get adapted to movies, and the extent to which studios inappropriately stretch out a single book into multiple movies.

Let’s apply this same methodology to one of the most commercially successful movie franchise adapted from a book franchise: Harry Potter. Like The Hobbit, it too has a single book that was split into more than one movie (Harry Potter and the Deathly Hallows): 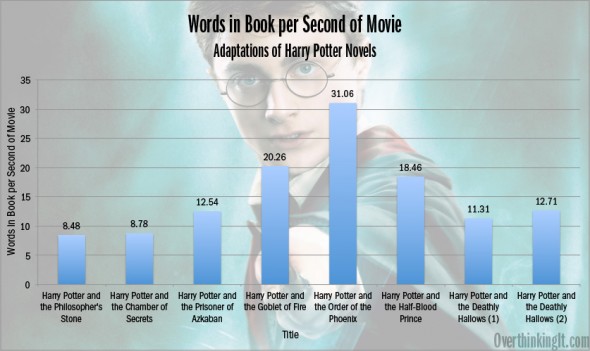 A few interesting things of note: the average Words in Book per Second of Movie (WIBPSOM) for the Harry Potter movies is 15.45, which is actually higher than that of the Lord of the Rings movies (excluding the Hobbit movies), which comes in at 13.7. This is largely driven by the hefty tomes in the middle of the series that got their own movies: Goblet of Fire (157 minutes, 190,858 words), Order of the Phoenix (138 minutes, 257,154 words), and Half-Blood Prince (153 minutes, 169,441 words). But note that even though Deathly Hallows (198,227 pages) got split into two movies, the WIBPSOM for those two movies is still way, way higher than that of the Hobbit movies, and actually comes close to that of the Lord of the Rings movies.

(Caveat: I have not read any of the Harry Potter books, but that’s actually not relevant to this exercise. Remember, we’re using word count as an imperfect proxy for plot material in a book. That being said, feel free to talk about all the amazing stuff in Order of the Phoenix that they had to cut out of the movie in the comments. More relevant caveat: for Deathly Hallows, I just split the word count in half and used that number for both movie installments.)

It seems like the Harry Potter franchise densely packs book material into its movies, but what about yet another movie franchise that’s based on books, and also has a book that’s split into multiple movies? I am of course, referring to the Twilight Saga: 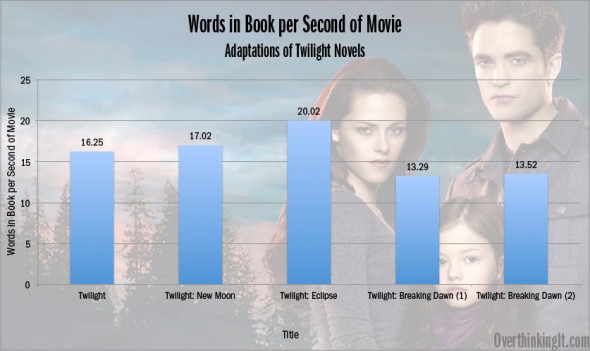 More so than with the Harry Potter series, we see a consistently high WIBPSOM across all entries in the Twilight Saga (yes, I insist on referring to it as a saga), including in the split installment of Breaking Dawn. And it goes without saying that these numbers are way higher than the pathetic 3.12 WIBPSOM for the Hobbit movies.

I could easily stop here and declare victory over the Hobbit, but I’m not done yet. We have YET ANOTHER book/movie franchise with a split installment to analyze: The Hunger Games. 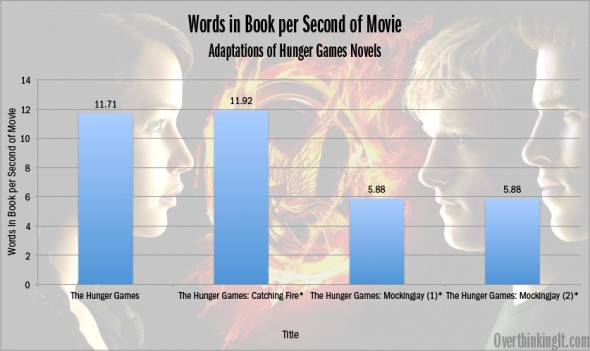 Because the remaining three Hunger Games movies have yet to come out, I simply used the run time of the first installment (142 minutes) to calculate the WIBPSOM values for those future movies. This may not be the case, particularly with the two Mockingjay movies, but even if they come in at a more standard 120 minutes apiece, that would bring their WIBPSOM values up to only 6.96, from 5.88. Which is still much higher than that of the Hobbit movies. In other words, the studio may be “Hobbiting” Mockingjay by splitting a relatively short book into multiple installments, but they’re not doing it as badly as they are with the Hobbit.

But I say “badly” like “Hobbiting” a book is automatically a Bad Thing and that we should be able to optimize movie adaptations of novels through math. That would be quite the stretch. We can say definitively that The Hobbit is stretching its content (or at least its words) among movies to a degree that none of these other franchises have done so (or are planning on doing), and I would argue that The Hobbit: An Unexpected Journey suffers as a result of this stretching. But we can’t say definitively that The Hobbit would be better served as just a single movie, since we’re not able to see that movie. And again, in case I wasn’t clear enough: word counts are proxies for content that would need to be adapted into a movie, not direct measures of that content.

All that being said, I still think this is an interesting way to examine these book-based franchises and how they adapt source material for different media and business needs. If you agree, let me know in the comments! I have more data for other books/movies, and could easily expand that data set. And I know you all like graphs.

[Continued in Part 2, “The Desolation of Statistics.”]

51 Comments on “An Unexpected Journey: Book Length vs. Movie Length in Adapted Franchises”