In Part I, I discussed some of the preliminary legal issues involved in Zod’s extradition request for the fugitive that stole his planet’s secrets. Here, in Part II, I’ll first discuss whether the extradition request can be legally granted. Then, I’ll discuss the political issues at work.

It seems clear that at least for our purposes, Zod and his spaceship would be treated as if it were a nation, and that Kal-El would be treated as if he were a Kryptonian citizen. So we have a situation not unlike the drama involving Edward Snowden: a nation is requesting the return of one of its citizens from the territory of another nation.

But despite US requests for extradition, the PRC/Hong Kong government allowed Snowden to leave, citing discrepancies in the official request. Particularly when politics are involved, not just any old request will do. State or no State, citizen or no citizen, a nation generally won’t turn over a person just because another nation asks. And Superman has the right to fight his extradition in court.

When do I get my phone call?

First of all, extradition is generally only granted pursuant to a treaty, one of the big reasons why we haven’t been able to get Snowden turned over from Russia yet.

Clearly no such treaty exists between the US and Krypton. While international law and the law of some nations ALLOWS extradition outside of a treaty regime, US law is very clear that extradition is only lawful when done under the auspices of a treaty. (See: 18 USC § 3181) The sole exception exists for foreign nationals who harmed US citizens aboard, which doesn’t really seem to apply to this situation. So the US can’t fulfill the extradition request without violating US law. This is not an unimportant consideration: even if Superman doesn’t bring lawyers with him, the President would still be bound by this requirement. It’s possible he could get around that by “deporting” Superman back to the Kryptonian ship, but that’s not really what’s going on here.

Putting aside US legal issues for just a second, there are broader international law concerns at work as well. Zod doesn’t allege any specific crime, he just demands that we turn Superman over. Generally, extradition requires something called “dual criminality”: the supposed bad act has to be a crime in both the requesting State and the State in which the person is now. And the crime can’t be “political” in nature.

As the audience knows, Zod’s request is based on Kal-El’s possession of the “Cryptex”—essentially, information. State Secrets. As the recent drama with Edward Snowden has made clear, “theft of State secrets” has a fairly nebulous status when it comes to these sorts of requests. And whether he “possesses” the Cryptex or not, it’s far from clear that Kal-El actually committed any crime. He was, after all, a baby when the theft occurred. Even if he possesses the secret, it’s difficult to argue that he is actually guilty of any crime. 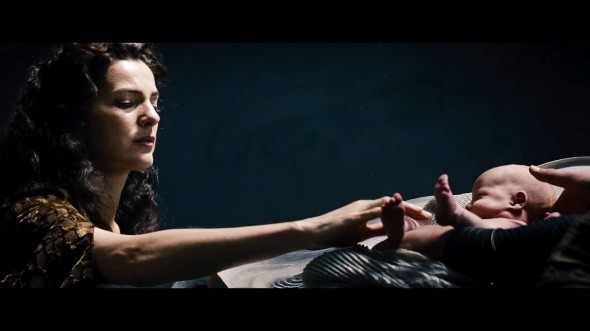 Finally, Superman could also request asylum. His case is certainly stronger than Snowden’s. As discussed above, Kal-El wasn’t even directly involved in the supposed crime. What “charges” there are against Superman are essentially political: he’s the offspring of Zod’s political enemies, and his very existence is anathema to Zod’s future political goals.

It’s unclear from Zod’s request exactly what he plans to do to Superman, but I don’t think Superman would have too much trouble claiming that he would be in danger if he were turned over to Zod’s custody (in as much as it’s possible for Superman to be in danger). So he probably has a solid case for political asylum, and extradition is probably barred by customary international law in addition to U.S. statutes.

Of course, the U.S. government might be willing to bend all of these rules for the sake of avoiding wide-scale planetary destruction. I suspect the President has lawyers that can leap over Statutes in a single bound (or memo, as the case may be) – particularly since the Constitution, as they say, is not a suicide pact. Failing that, Congress could change the statute in an emergency session, loosening extradition rules for inter-galactic requests. Further, at least on U.S. soil, U.S. statutes take precedent over international law. This wouldn’t solve all of the international law problems, but Superman probably can’t raise those claims himself – if the requesting State doesn’t object to the international law vioaltions, it’s unlikely Superman will be able to.

So despite the nebulous legal status of the request, Superman’s legal case will rise and fall with the politics of the situation. This isn’t unique to Kal-El. Describing the Snowden case, international legal scholar Stephen Vladeck says:

The dirty little secret about extradition law is it’s really about 90 percent politics and only 10 percent law.

In the film, there is virtually zero question that, given the chance, the US will turn Superman over—at no point does anyone in power suggest that there is really any other option. This is somewhat interesting. Unlike Batman and Spiderman, the canonical Superman has generally enjoyed a positive relationship with the people of Earth and the United States more generally. It seems a little strange that the U.S. doesn’t balk at least a little at the idea of turning him over to a hostile power.

Of course, at this point in Man of Steel, he’s not really Superman. In a more traditional Superman story, Superman is introduced to the world by saving planes from crashing and foiling bank robberies. This goes on for a few years and then someone like Zod shows up. In Man of Steel, the first that the U.S. government or any human other than Lois Lane ever heard of aliens of any kind was this broadcast. So it’s understandable that the government would be unwilling to risk intergalactic war over what is, at that point, just some guy.

What is less understandable is why no one raises a second, more fundamental question: Isn’t this negotiating with what is essentially a terrorist? If we give in to THIS demand, what will we be giving up next? As James Madison said when dealing with the Barbary Pirates:

If history is any guide, demands that start with “Do this or else” typically end with “Kneel before Zod.” 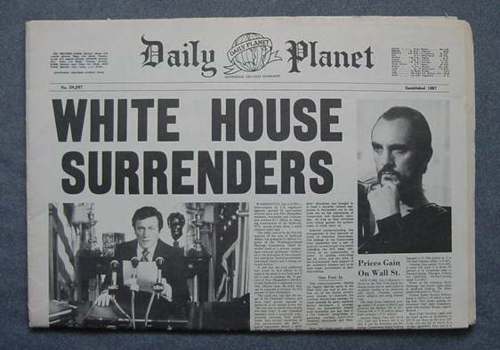 In nearly every other movie ever made where some power-mad despot or terrorist holds the world for ransom, there’s always at least someone in the back of the room to point out that we shouldn’t negotiate with a gun to our head, because after you’ve given in once, it’s hard to stop. There are of course plenty of practical reasons to avoid this rule in the case of a new and apparently hostile alien species, but it’s still surprising that no one even raises the issue. As it turns out, it would have been a good issue to raise: turning over Superman does nothing except accelerate Zod’s plans to destroy us.

And of course, no one even mentions the legal issues above. Mr. Snowden’s recent revelations about the NSA show a willingness on the part of the Executive to play things “fast and loose” with the law when security is at stake, but the revelations have also shown that lawyers stick their noses into every step of the process. While it’s certainly possible that the NSA tactics disclosed by Snowden violated the law, or are bad as a matter of policy, it’s impossible to imagine that vast disputations of lawyers were not at least CONSULTED along the way.

In Man of Steel, the military (presumably under orders from the President) just sort of acts. Faced with a security threat, the law is thrown overboard without even so much as a thought. While it’s not difficult to imagine the law being junked in the face of planetary destruction, it IS difficult to imagine that these issues wouldn’t even be considered. 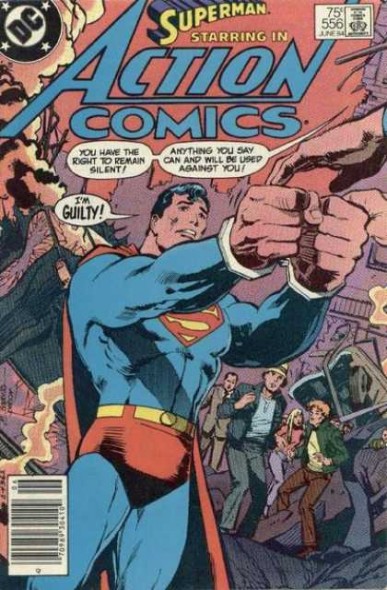 Which is why it’s worth noting that in the case of Superman, the US government doesn’t really have the practical ability to actually force the transfer in any case. Kal-El, the demi-god living among us, can just say “No” and there’s not much any non-Kryptonian can do about it. Unlike a more terrestrial fugitive from the law, Kal-El doesn’t have to slum it in the Sheremetyevo transit lounge (or, more likely, a nice Moscow safe house). All Superman has to do is Suit Up in his brand new cape and fly to a new country that is willing to refuse Zod’s demands, or simply go back in to hiding. Instead, he puts his trust in the system – he had to be at least a little disappointed to find that just how quickly his adopted homeland was willing to turn him over. Maybe he should have brought those lawyers.

Which brings me to the conclusion of this admittedly silly exercise. International law, while more binding and firm than is commonly understood, is still largely a creature of politics. The nations that are considering granting—or denying—asylum to Edward Snowden aren’t doing it because of the legalities involved. Ultimately, the decision comes down to politics.

And it doesn’t get more political than an alien spaceship taking over the airways and threatening the “fate of the world.” There’s simply no precedent in international law for inter-galactic, inter-species negotiations that threaten the future of the entire planet. So we turn Kal-El over to his fellow Kryptonians, and everyone lived happily ever after. 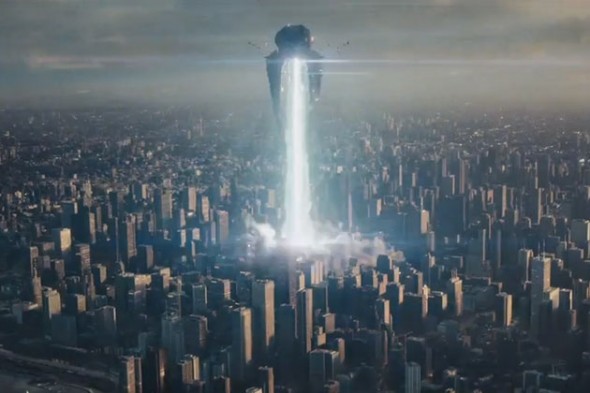