Where our government has abandoned us…

Where incompetence, fear, and greed are the laws of the land…

Only one group of rogue heroes…

Can save us from annihilation. 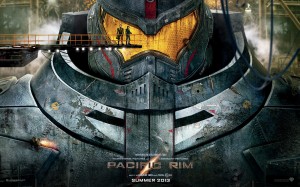 No tax dollars at work here.

Does this sound familiar? Of course it does. In rough terms, it’s the outline of the plot of multiple summer blockbusters in recent years, including the new geek darling Pacific Rim. And it’s become such a common trope that Overthinking It has identified this as a growing trend. The theory is that, in the years since 9/11, America has grown increasing disillusioned with its government due to its repeated shortcomings–Afghanistan, Iraq, Hurricane Katrina, the Great Recession, Congressional gridlock–and that Hollywood movies have reflected this disillusionment with more and more stories that involve rogue heroes operating outside of, or in some cases, directly against, the authority of the US government.

Both of these trends feel right on a gut level. Who among us isn’t more cynical and distrusting of the United States government now, compared to 12 years ago? And doesn’t Independence Day, in which the US government unequivocally saves the day, feel dated and corny compared to movies like The Dark Knight Rises and The Avengers, in which non-state actors rise above the pettiness of governments to get the job done?

But why stop with gut feelings as indicators of trends when we can use quantitative analysis to illustrate these parallel trends? This is Overthinking It, after all. So fire up your quant sensors, and get ready to go rogue. 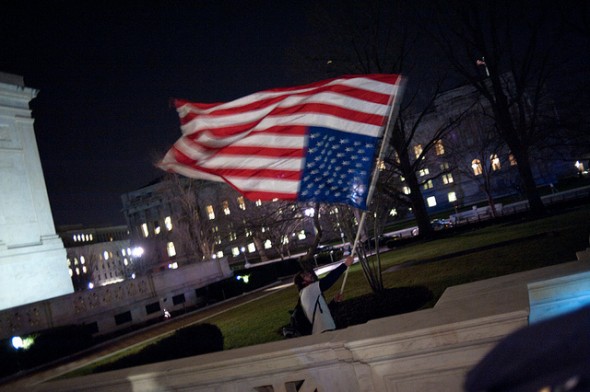 We don’t have to look hard to find quantitative evidence of this trend. Multiple polls reveal the same trend: a huge spike in distrust of government at the national level since 2001.

Here’s a Pew Research Center poll from April 2010 (the blue line indicates the percent of Americans who say they can “trust the federal government almost always or most of the time”):

Here’s a Gallup poll from September 2011:

And, in case you weren’t convinced there’s a real trend at play, here’s a New York Times/CBS News poll from October 2011:

(As you can see from these graphs, there have been similar troughs in public confidence in Washington in the past. It’s not like this current age of discontent is unprecedented, but without an army of interns to do data entry and number crunching, I had to constrain the analysis somehow.)

So with these polls, we’ve established the degree to which distrust in our government has trended upward since 2001. The easy part is done. Now how do we measure this in movies?

To measure this trend in movies, I took the top ten movies at the US box office for each year from 2001 to 2012. I then narrowed down on the movies to just those where the US government plays a substantial role in the plot. I defined “US government” as elected officials, any branch of the armed forces, agencies like the FBI or the CIA, or fictional government entities (like the National Super Agency from The Incredibles).

Now comes the tricky part. I then categorized each of these movies based on the overall portrayal of the US government, keeping in mind that “the US government” is not a single monolithic entity, but a collection of individuals and agencies:

Admittedly, this was a highly subjective exercise. I’ll explain some of the edge cases in a moment, but for now, let’s see if this exercise yields any trends in the depiction of the US government in movies over the last twelve years: 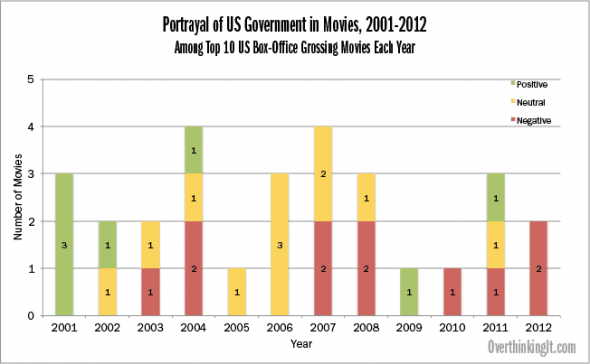 Is there an upward trend in negativity? When looking at this year-by-year, it’s a little tough to say, since in any given year there may be only 2 or 3 movies. So let’s group the data into three-year chunks and see what happens: 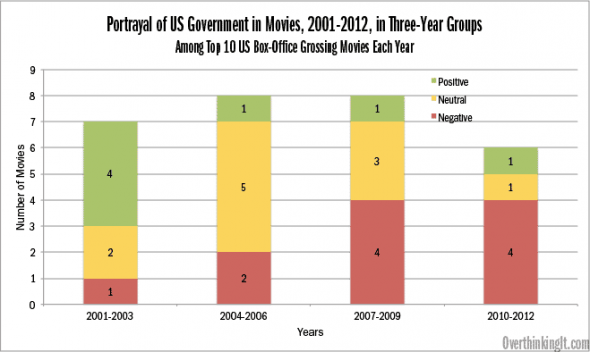 Well, look at those bulging red bars of cinematic distain for the federal government grow over time.

As a reminder, here’s one of those graphs that shows (actual) declining trust in the (actual) federal government over the same period:

Now, before we declare victory and wave this around as incontrovertible proof of how public sentiment has influenced moviemaking over the past twelve years, we need to talk about the caveats:

OK, so now that we’ve gotten these caveats out there, can we declare victory? Not yet. The movie data is in line with the trend that we’ve anecdotally identified, but it doesn’t prove its existence in the same way that the polling data proves the existence of the trend of growing distrust of the US government. A larger data set of movies would help get us draw these conclusions with greater confidence, certainly.

But absent that, I’m happy with what we have here, which is a quantitative starting place to further explore the complicated relationship between our politics and our entertainment.

So what do you think? Is art imitating life? In two years, will our multiplexes be full of Eric Snowden-inspired tales of government surveillance and the brave whistleblowers who would dare reveal them? Or is something else at play here? Sound off in the comments, you rebel, you!

(Oh, and if you’re a real nerd like me, check out the data set, and feel free to add onto it in your own copy. Just report back here with your findings.) 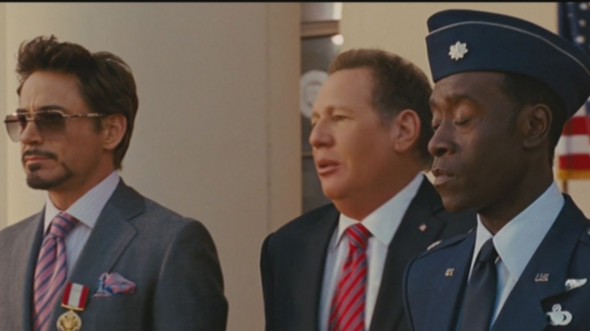 22 Comments on “Movies Gone Rogue: The Increasingly Negative Portrayal of the US Government in Movies, 2001-2012”