SPOILERS FOR STAR TREK INTO DARKNESS and IRON MAN 3

“War is coming, and who’s gonna lead us? You?? If I’m not in charge, our entire way of life is decimated! So, you want me off this ship? You better kill me.”

“Son, we live in a world that has walls, and those walls have to be guarded by men with guns. Who’s gonna do it? You? You, Lt. Weinburg? I have a greater responsibility than you could possibly fathom. . . my existence, while grotesque and incomprehensible to you, saves lives.”

In the most recent addition to the Star Trek franchise, we find out at about the movie’s half-way mark that Admiral Marcus, head of Star Fleet, has sent the Enterprise on a suicide mission, aimed at triggering a war with the Klingon empire. Arguing that war with the Klingons is inevitable, he has been building a fleet of warships in secret. He’s willing to sacrifice Kirk and his entire crew in order to make that war happen.

We find out further that Admiral Marcus has been using a genius/super-soldier war-criminal from Earth’s history to develop these weapons. Both his use of Khan and his sacrifice of the Enterprise are motivated by a single idea: civilization can only be saved by uncivilized men and uncivilized means. The Federation, without economic need or martial strife, will be helpless to stop the war-like Klingons, without men who live “grotesque and incomprehensible lives.” Luckily, Kirk and Company arrive just in time to show that the right amount of technology, pluck and derring-do can solve any problem.

Who’s going to do it?

Who is going to defend civilization against the forces that seek to destroy it? And what kind of people do they need to be in order to accomplish that mission? Moves like Star Trek, Iron Man and The Dark Knight wrestle with the same question that has plagued the entire War on Terror: Must a civilized society use uncivilized means to protect itself? The debates on torture, wiretapping and targeted killing all have this question at their root. Of course, the debate is even older than the War on Terror: A Few Good Men came out in 1992 and asked the same question—can we defend ourselves without resorting to barbarism and lawlessness? Like Admiral Marcus, Colonel Jessup is willing to break the rules of his society because he believes doing so is how to “defend a country.” You’re goddamned right that Colonel Jessup ordered the Code Red, and he’d do it again.

From a purely political stance, Hollywood has a long history of discomfort with military power and the use of military force. In Into Darkness, Scotty protests that Starfleet Officers are “explorers, not soldiers.” Throughout the Iron Man franchise, Tony Stark’s villains have been an assortment of military weapons builders, and he takes every opportunity to condemn the manufacture of more advanced weaponry. He even takes Nick Fury to task for building the “Phase II” weapons based on Tesseract technology. At least overtly, the message is clear—weapons are bad, and the people who build them should be condemned.

Unfortunately, Hollywood Blockbusters like Into Darkness have a problem when dealing with these issues. As Matt Wrather, the WORLD’S FOREMOST EXPERT on François Truffaut likes to remind us, “There is no thing such as an anti-war movie.” Explosions, violence and mayhem put butts into seats—the line between condemnation of violence and glorification of violence is razor thin. There’s an inherent tension in movies that that have an explicit message of “War is bad”, and an implicit message that “War is RAD: Buy our toys!”

So when Scotty protests that Star Fleet isn’t a military organization, it’s hard not to notice that Into Darkness takes a TV show about explorers and turns it into a two-hour movie about soldiers. Tony Stark condemns Nick Fury, despite spending all of his available time building weapons of his own. In multiple movies, Tony Stark protests that someone else is building dangerous weapons that could fall into the wrong hands—right before strapping on a suit of armor and shooting people in the face with it (usually with alcohol on his breath). 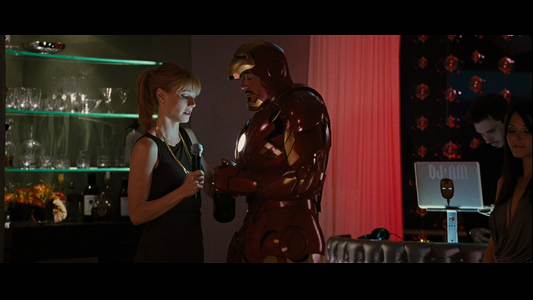 Blockbusters try their best to wrestle with these complicated issues of security v. dignity, the needs of the many versus the needs of the few. But in the end, they also need to sell some movie tickets. So how does the Hollywood Blockbuster resolve these issues? In Into Darkness, Spock blows it up with some torpedoes (and then punching it in the face). In Iron Man 3, Tony Stark uses a few dozen suits of Iron Man armor to beat down the bad guys. In The Avengers, we don’t need the Phase II weapons because we have well, The Avengers.

Who is going to defend civilization? Ultimately, the answer is an unsatisfying one. Hollywood rejects that idea that only moral monsters can save the world, and replaces it with the idea that only angels can save it. We don’t need to sacrifice our morals—we have superheroes! The solution to a bad guy with a gun is a just really smart, strong, good looking moral paragon with a gun. As long as your motives are pure, having a gun is just fine—problem solved!

Because only our hero is moral enough and responsible enough to use power effectively, anyone else (villain or no) must be wrong. Unfortunately, this insistence on absolutely purity leads to movies that “throw the baby out with the bath water.” While the threat in Into Darkness is almost entirely created by Admiral Marcus’ bungling and militaristic over-reach, it’s not that the Klingon threat isn’t out there. Clearly sending your own ship on a suicide mission to start an interstellar war is wrong—but that’s not to say that having a few warships around to defend the Federation is a bad idea.

In The Avengers those Phase II weapons would have been really handy if, you know, an alien army decided to invade New York City one day. Come to think of it, a platoon of soldiers in Iron Man suits would have come in really handy fighting said alien army. In Iron Man 3, Pepper Potts rejects research into the Extremis project—solely because it COULD have military applications. Just to be clear, she refuses to do research into a serum that regrows missing limbs and probably has all sorts of other amazing medical uses, just out of a puritanical fear of anything that could be misused. 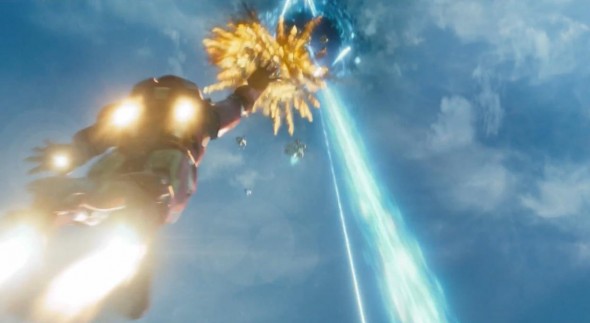 You know what would have been better here than one drunken billionaire in a suit? SEAL Team 6 in 20 suits.

Instead, the solution is institutions that work. There’s nothing wrong with a Starfleet with an increased military capacity—the problem is when you put it in the hands of a megalomaniac without any civilian oversight. Checks and balances, civilian oversight and the democratic process are ultimately the only effective way of ensuring that neither the monsters at our door or nor the monsters in our midst destroy our society. We can’t count on finding the perfect specimens of humanity and getting them to save society for us—entertaining as their stories may be.