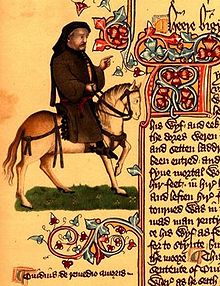 Is it just me, or were some of the so called great English writers the worst kind of incompetent hacks?  The time has come to think seriously about our supposed titans of literary culture, the time has come for us to finally acknowledge that Geoffrey Chaucer couldn’t write. I mean, have you ever tried to read Chaucer? It’s basically gibberish. How anyone has ever been able to tolerate it I have not the vaguest idea. Shakespeare was bad enough, what with his obsessions with thees and thous, whereto and therefores. But at least he was somewhat comprehensible. I defy you, dear reader, to comprehend this nonsense, those ugly, ugly words with which our so-called poet was so enamored.

Even when he tries to write properly, he can’t spell, at all. Practically ever other word he wrote is misspelled. Didn’t he have a dictionary? I mean okay, we all make mistakes. Few of us can correctly spell every word ever devised. But at least you and I know where to turn to when we need help, and we aren’t so full of ourselves that we think we don’t need help. Not Geoff, no, he preferred the tried and true method of jamming a bunch of letters together and hoping for the best.  I mean, seriously, where was his editor? I can’t imagine any editor would be happy with what Geoff was producing. His editor must have either been profoundly lazy, or profoundly drunk.  I mean, nobody can read the damn things, no one.

What kind of an idiot was he? Not only can’t he spell, he’s a poet who cannot, repeat, cannot rhyme, at all. Nothing rhymes, and he’s supposed to be this big poet! Not to mention, he never actually got around to finishing his big thing. Imagine, the gall, the sheer laziness, of handing in an incomplete project like it’s some huge accomplishment. Nobody likes a quitter, least of all me. How can it be a great work if the author himself couldn’t even bring himself to finish it. If he was bored by the story, why should anyone else care?

And his whole set up is terrible. So he decides to make a story about a pilgrimage. Does he set it in the actual holy land? No, he sets it in the middle of England, of all places, because we’ve all read that extra chapter of the bible where Jesus chills on the Thames. And then, he has the gall, the gall, to rip off the Arabian Nights. Yeah, buddy, the whole “story within a story” thing? Real original. I’m sure nobody has every thought of that before. Oh wait, everybody has. I mean seriously, is there any bigger sign of a hack than using that tired premise? If you read something with a story within a story, alarm bells should be going off. This is a writer who is trying to tell us how deep, and complex he is. Well guess what? I don’t care, and dear reader, neither should you.

While we are on this subject why is Lewis Carroll so widely esteemed? His works don’t make any sense either. It is time for us to stop judging works according to what established opinion says about them and it is time to start judging them according to commonsense. Commonsense tells us that everything Chaucer wrote was misspelled, or otherwise incomprehensible gibberish. That’s just common sense.

3 Comments on “Underthinking It: A Review of “Canterbury Tales” by Chaucer”