In “Sexy and I Know It,” the singer makes a bold proclamation of his physical attractiveness and his cognizance of this fact.

But this seemingly simple statement is just the starting point for a discussion on the narrator’s sexiness: What if he isn’t sexy, but thinks he is (as is strongly suggested in the video)? Are there people who are sexy, but don’t know it? What about the rest of us who aren’t sexy and are painfully aware of this fact? 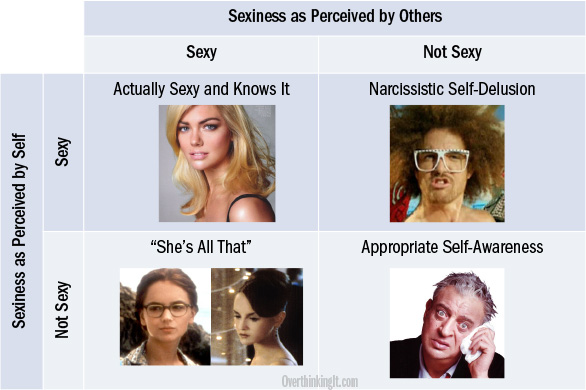 As far as I know, business school’s haven’t perfected the use of the three-by-three matrix yet, but thankfully, they have given us the tool we need to capture this complexity: the flow chart.

Or in this case, the LMFAO Chart.* Click the image for a larger version. I know you want to:

*I make not apologies. I’m Making Awful Puns And I Know It.

4 Comments on “The Musical Talmud, Flowchart Edition: “Sexy and I Know It” by LMFAO”