Oh, Overthinking It fans. You’re so great. I’m not saying it just to flatter you. It’s true! You’re kind, you’re open to new experiences, you’re conscientious. Most of you are introverts, and that’s cool. We like fans who prefer to snuggle up with a podcast on a Saturday night. You’d think overthinkers would be neurotic, but you’re not. You’re pretty well-adjusted (for people on the Internet, at least).

These aren’t my opinions. This is Science. True blue, replicatable, testable, observable Science.

You see, some smarty-pants folks from the University of Cambridge did a study that showed that one’s Facebook Likes “can be used to automatically and accurately predict a range of highly sensitive personal attributes including: sexual orientation, ethnicity, religious and political views, personality traits, intelligence, happiness, use of addictive substances, parental separation, age, and gender.” They also made a website that calculates your scores on the Big Five Personality traits based on your Facebook Likes. And if you happen to Like Overthinking It on Facebook, here’s what happens: 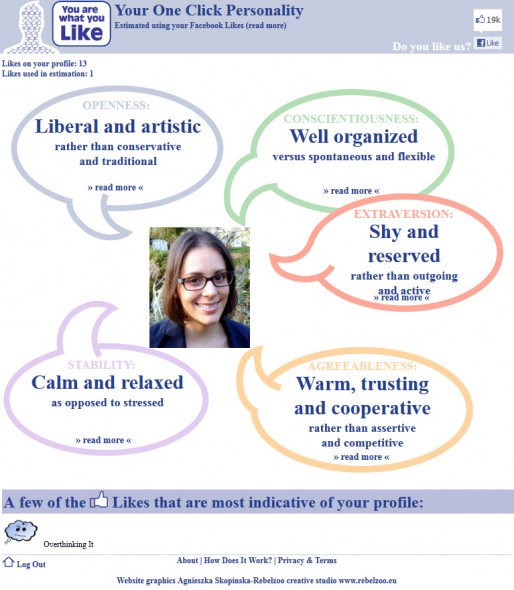 How did they figure this out? They went through the Likes and MyPersonality profiles of over 58,000 Facebook users and (like good overthinkers) made some charts. The data show that it’s pretty easy to use someone’s Likes to determine the person’s race, gender, sexuality, political leanings, and religion (among other things). If you’re worried that evil advertising firms, credit agencies, psychologists, and governments will use this information to continue subjecting you to a level of scrutiny you probably don’t deserve, you are SOL, my friend. That’s what you get for being so warm, trusting, and cooperative.

I encourage you to read the whole study and these two supplemental PDFs. To avoid copyright infringement, I’ve made my own chart based on the researchers’ findings. Overthinking It is, I’m told, a pop culture website, so I focused only on the pop culture-related items: 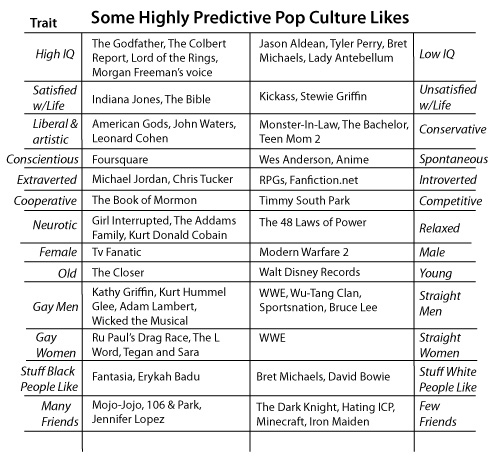 So the next time you’re at an open mic night and want to make the most accurate stereotype joke possible, look at this chart. Then when you say, “White people like Bret Michaels,” you’ll have science on your side. (White people, amirite?? I’ll be here all night, folks.)

Care to draw any conclusions from this information? By all means, do so in the comments! I’d like to hear what you kind, artistic, conscientious, introverted, and relaxed people have to say.

14 Comments on “The Overthinker Becomes the Overthunked”