The voice of one crying in the wilderness: “Prepare the way of the Lord”

When the day of Pentecost came, they were all together in one place. Suddenly a sound like the blowing of a violent wind came from heaven and filled the whole house where they were sitting.

Do the Harlem Shake.

How did this Harlem Shake video make you feel? Chances are you’re either slightly amused by it, or slightly sick of it, or perhaps both. But did it make you feel inspired? Did it bring you closer to God?

Maybe it did, but you just didn’t realize it.

One of the hardest things to explain about the Harlem Shake phenomenon is the “why” of it. Why do people do it? Why is it so often replicated? The most obvious reason is that it provides a structured, safe, and easy way for people to act silly with their friends/teammates/colleagues. That makes sense, and probably accounts for most of the reason behind the meme’s success, but this wouldn’t be Overthinking It if we left it at that.

This is where those Bible quotes come in. I think that one of the reasons why the Harlem Shake has resonated so much in our culture is that it evokes stories of prophecy, revelation, and redemption as depicted in the Judeo-Christian tradition.

It’s not even that much of a stretch. So have some faith and let me explain:

And I will put My words in his mouth, and he shall speak unto them all that I shall command him.

The typical Harlem Shake video starts with a lone dancer (often wearing a motorcycle helmet) surrounded by non-dancers who are doing something mundane: working in an office, lounging in a dorm room, standing in formation, etc. This is the scene for the first half of the video, before everyone joins in the dancing.

In other words, the lone dancer is a prophet who brings the word of God to the unbelieving masses. At first, they reject God’s message: live a holy life according to His will.

“Truly I tell you,” he continued, “no prophet is accepted in his hometown.” 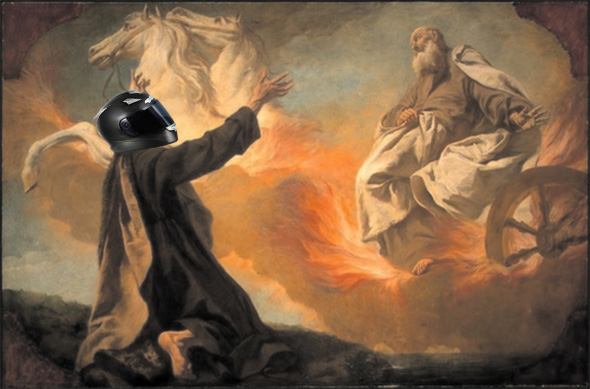 In this case, living according to God’s will is represented by dancing like a fool. I know this seems counter-intuitive, but it’s actually key to understanding this religious interpretation of the Harlem Shake, and I’ll explain it shortly. But first, BEHOLD THE WORD OF GOD:

At the halfway point of a Harlem Shake video, a deep, authoritative voice intones, “DO THE HARLEM SHAKE.” What happens next? Well, everyone obeys and does the Harlem Shake. Abruptly and dramatically.

Similar moments of dramatic revelation/conversion, whether through God Himself, one of His prophets, or one of his other agents, are numerous in the Judeo-Christian tradition: Moses on Mount Sinai, Saul on the road to Damascus, Jesus and his disciples at the Transfiguration, just to name a few.

There’s one dramatic moment of revelation that I’d like to spend a moment on: Pentecost, when God’s Holy Spirit visited the apostles and “God-fearing Jews from every nation under heaven”:

When they heard this sound, a crowd came together in bewilderment, because each one heard their own language being spoken. Utterly amazed, they asked: “Aren’t all these who are speaking Galileans? Then how is it that each of us hears them in our native language? … Amazed and perplexed, they asked one another, “What does this mean?”

After receiving God’s Holy Spirit, the crowd is united by this shared sense of understanding, no longer blocked by their limitations. Likewise, after the drop (revelation) in the Harlem Shake, all participants are united in their dancing.

But here’s the best part of the Pentecost parallel: the reaction of those who weren’t in on the fun.

Some, however, made fun of them and said, “They have had too much wine.”

OK. To be fair, a lot of Harlem Shake video participants may have been drunk during filming, but the point remains: those who have received God’s word and are living according to His will may be misunderstood or persecuted by others. 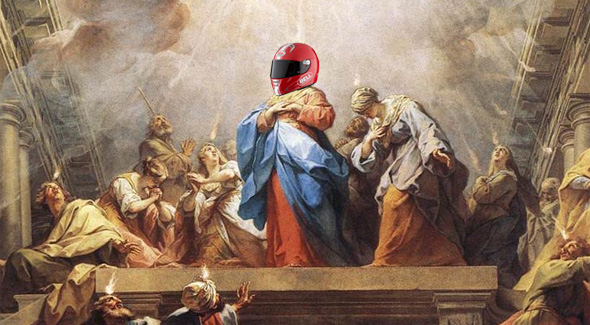 As I mentioned before, the key to making sense of this religious interpretation of the Harlem Shake is understanding how dancing like a fool is representative of living a holy life according to God’s will.

You’ve read Paradise Lost, right? What? No? Then you’re surely familiar with the Book of Genesis and the story of the Garden of Eden. God creates humans in his image. They’re innocent and sinless until Satan tempts Adam to eat from the Tree of Knowledge–The Fall.

Paradise Regained, if you will. 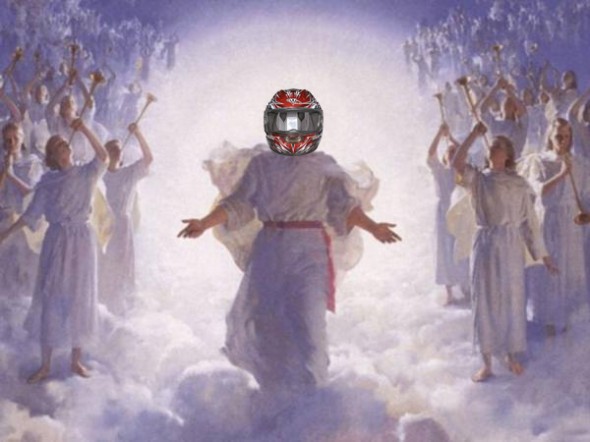 To be clear, I’m not suggesting that makers of Harlem Shake videos have any conscious, or even unconscious, sense of religious narrative in mind when creating these videos. I am, however, suggesting that the parallels between components of the Harlem Shake and familiar religious stories of prophecy, revelation, and redemption have special resonance in our pop culture and may help explain some–but not all–of its popularity.

Still skeptical? Consider for a moment the prevalence of messiahs, Christ-figures, dramatic conversions, and prophets in modern pop culture. Some of these are deliberately tapping into the Judeo-Christian tradition to give their stories extra heft. Others just happen to have more in common with this tradition. In these cases, the Harlem Shake included, they fit into the broader collective understanding of these types of stories, whether or not audiences or creators are aware of the connection.

As for those of us who are aware of the connections and try to share this revelation with others: well, I wouldn’t call myself a prophet, but I wouldn’t stop you from doing so.

Up until now, I’ve only dealt with the Judeo-Christian interpretation of the Harlem Shake, since that’s what I’m most familiar with. But recent events in the Arab world demand that we examine this phenomenon in the context of Islam. Apparently, political movements in countries like Tunisia and Egypt have taken up the meme as a way to protest against Islamist parties and their puritanical, conservative philosophies. Here’s one example from Egypt:

(Is that Mickey Mouse-cum-Princess Leia playing the role of the helmeted prophet?)

Certain religious Muslims may have problems with the wild dance moves of the Harlem Shake, but they should be sympathetic to the redemptive narrative that’s similar to what I’ve described above. According to Islam (or at least Wikipedia’s article on Islam), everyone is Muslim at birth, and those who convert to Islam are actually reverting to their original conditions. It’s less focused on original sin than the Christian interpretation, but the core of the idea still works: Originally, everyone is Muslim (dancing). Then, some people fall away from Islam (stop dancing). A Muslim (dancing) prophet comes to the unbelievers (non-dancers), reveals to them the word of Allah (“DO THE HARLEM SHAKE”), and brings them back to their original state of being Muslims (dancing).

I do hope that this interpretation can help bridge the gap between secularists and Islamists in the Arab world. Is that too much too ask for?

11 Comments on “Thy Harlem Come, Thy Shake Be Done: Searching for the Divine in “The Harlem Shake””