These are both true (and to be fair, perhaps the first is more true of women and the second is more true of men). But which is more true on Oscar Night? Are your chances of winning better as new hunger girl on the block Jennifer Lawrence, or as red carpet vet Naomi Watts (double her age, believe it or not)? To figure this out, I went looking for a spreadsheet with all the ages of all the nominees of all the acting Oscars ever. There didn’t seem to be one floating around… so I decided to fix that. My sincere thanks to the hundreds of Mechanical Turks who made this project possible.

So more than 1,600 data points later, what can we learn about age and Oscar? Well, let’s start with the simple stuff: from the very first Academy Awards in 1929 to the present, here are the average ages of the acting nominees and winners. 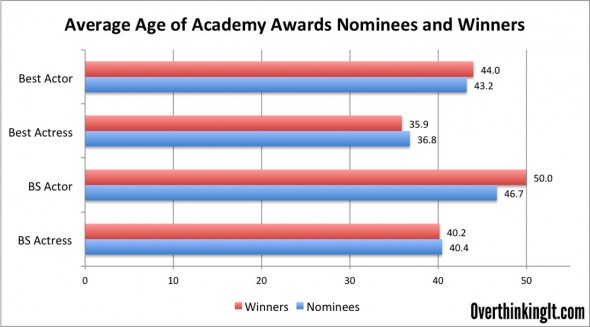 I’m sure you all are shocked (SHOCKED) to find out that the average Best Actor nominee is 6.4 years older than the average Best Actress nominee, and the average winner is 8.1 years older. (In all seriousness, I’m a little surprised the gap was only 8 years. This year both Jennifer Lawrence and Bradley Cooper picked up acting nominations for Silver Linings, and that’s a 16 year gap. This is typical Hollywood casting.) The difference is even more stark in the supporting categories, where the Best Supporting Actor winners average a full decade older than the Best Supporting Actress winners. Last year that Oscar went to Christopher Plummer (82). This year the front runners include Alan Arkin (78), Robert De Niro (69), and Tommy Lee Jones (66). Phillip Seymour Hoffman is the youngest of the bunch, and he’s 45. On the other hand, Best Supporting Actress nominees include Sally Field (66) and Jacki Waver (65), but also 30-somethings Amy Adams and Anne Hathaway.

Anyway, because reducing an artistic award to a single tangential variable never fails, I’m prepared to predict the winner of each category based solely on who is closest to the average age of the previous winners:

But on second thought, merely looking at the average ages can be misleading. We’re conditioned to expect a bell curve, with half the winners older than the average and half younger. But take a look at what happens when we graph the percentage of nominees and winners at each age. (Click to expand.)

It turns out the average age of a nominee is not the same as the most common age for a nominee. Look at the Best Actress chart. The average is around 37, but more 29-year-olds have won the award than any other age.

And look at that Best Supporting Actor chart. The curve for nominees is actually pretty smooth. But it turns out that young men almost never win. There’s a huge spike around middle age, and then a steady progression of old guys picking up statues into their 80s. Compare that to the Actor and Actress Awards; almost no one over the age of 63 has ever won those (although Meryl Streep may have a thing or two to say about that curve before she’s done).

But maybe it’s kind of silly to look at a data set that stretches from 1929 to the present without factoring in change over time. After all, the world’s changed a lot since then–for instance, almost all the films at the first Oscars were silent. So let’s look at the average age of the nominees for each year. 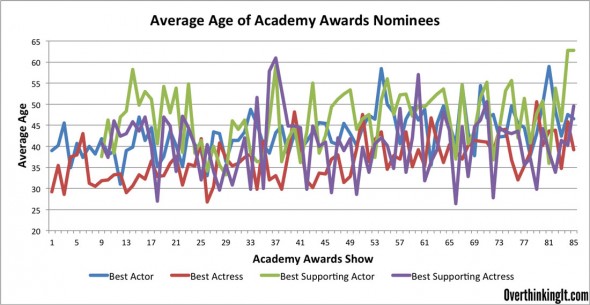 Honestly, this chart isn’t telling me much. It looks like Robocop’s EKG right before he malfunctions and goes rogue. So let’s try and smooth it out a little by averaging the nominees of five Oscar ceremonies at a time. 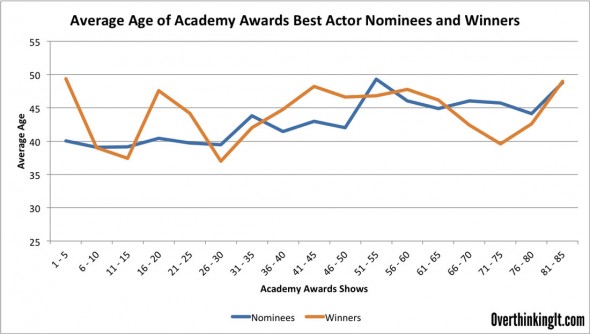 With five nominees in each year and five years in each data point, this cuts through some of the statistical noise and shows us a clear upward trend. Best Actress nominees used to be about 34. Now they’re over 40. Best Actor nominees have jumped up nearly a decade. Best Supporting Actress remains refreshingly random. As for the winners, those are only 1/5th the data so the lines are far more erratic.

It seems that despite Hollywood’s youth-obsessed reputation, the big prizes are going to older and older thespians. You could chalk this up to better beauty regimens and cosmetic surgery. You could chalk it up to the awards shows turning away from popcorn flicks (which remain as youth-obsessed as they were in the days of Valentino). But I see it a little differently. Over the last 85 years, American life expectancy has actually increased by 20 years. People used to die in their mid-50s! So perhaps what we’re seeing is more actors staying healthy and sticking around long enough to collect those statues.

What do you guys think? Give me your best Nate Silver impression in the comments. The data set is yours for the crunching.

11 Comments on “What’s the Prime Age to Win an Oscar?”