Anyone else watching Vinepeek? (It’s a “reel of newly-posted Vines in realtime.”) 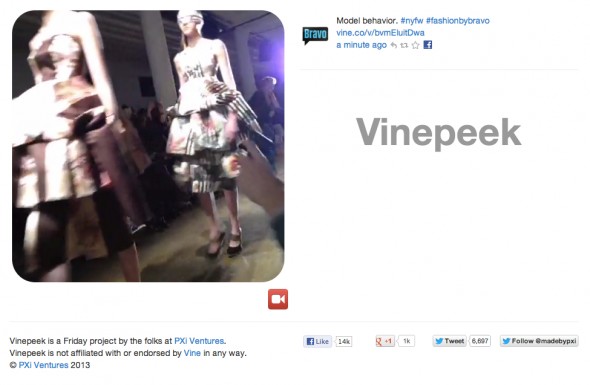 I’m not sure what to make of it. Brilliant found-art collage? New low for our collective attention spans? Hackneyed attempt at shoehorning video into a twitter mold? Discuss.

Mesmerizing, is what it is. I can’t turn this off.

This is the best thing ever.

And a minute later, saw it playing on Vinepeek.

I’m totally hooked on this. I’m going to found a new religion that’s based on watching this for hours on end until the universe’s truths reveal themselves.

I think the universe’s truth is a cat spinning around in circles. That’s what Vinepeek just told me.

PS – Idea for a movie – girl sees hot guy on Vinepeek, but it was only 6 seconds. Spends the rest of the movie trying to track him down.

That’s the rom-com version. Crime version: girl sees guy get murdered on Vinepeek, spends the rest of the movie tracking down the killer. On Vinepeek.

Horror version:  girl sees guy get murdered on Vinepeek, spends the rest of the movie getting hunted by the killer. On Vinepeek.

CBS procedural version: one man’s Vinepeek shows tommorrow’s Vines and he has to solve the crime before it happens. Also there’s a cat.

Creepy David Lynch mindfuck version:  one woman’s Vinepeek happens, by a continuous string of coincidences, to show nothing but Vincente Minelli’s Meet Me In St. Louis on infinite loop.  She despises Meet Me in St. Louis.

Dystopian sci-fi version: Vinepeek is used as a mode of social control by computer overlords to lull humans into believing that cats and drinking with friends are the most important things in life; the hero must enter the Vine and destroy it.

[After successfully hacking his way free of the master control program, Neo is shocked to see that his Vinepeek window slowly fade into a chatroulette window, where a dude is predictably jacking it.]

MORPHEUS: “Welcome to the Desert of the Real.”

Spy thriller: In the near future, the CIA uses Vinepeek to surveil American citizens as part of the War on Terror. But one agent* soon realizes that every karaoke Vine is actually part of a secret code sent by al-Qaeda operatives. (…Or is it?)

This is exactly why this song should never be allowed in #karaoke. http://t.co/FCeazHx6

*Ben Affleck with a beard

I would totally watch all of these movies. Provided they were no more than 6 seconds long.