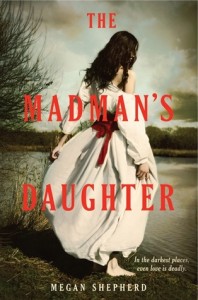 This week, the YA world is abuzz about The Madman’s Daughter, a new piece of historical fiction about the teenage daughter of Dr. Moreau. (Yes, that one.) (Yes, there is a love triangle in it.)

When I first got wind of the title, my mind immediately went back to one of the very first articles I ever wrote for OverthinkingIt.com. (Don’t read it. It’s meh.) In that piece, “The Unoriginal Writer’s Daughter,” I took writers – mainly women writers – to task for continually naming their books The Such-and-Such’s Wife and The Such-and-Such’s Daughter. A quick jaunt over to Amazon will show you that this trend is still very much in play today.

However, today I’m not going to criticize. I know how hard coming up with a title is. My publisher and I went through a list of maybe 50 titles before settling on Hammer of Witches, a name called “cool” by some and “huh?” by others. (It makes sense in context.)

Instead of criticizing, I’m here today to quantify and analyze. In other words: overthink! And, as is true in every good overthink, There Will Be Charts. My big questions for today are

1. Which family members get it the worst? Are there more daughters, sons, wives, husbands, mothers or fathers in these titles?

To answer this question, I hopped over to Amazon and did some simple searching. To make things easier for myself, I limited the searches to all works of fiction released after April 2008, which was when I wrote my last Overthinking It article on this subject. Here’s what I found: 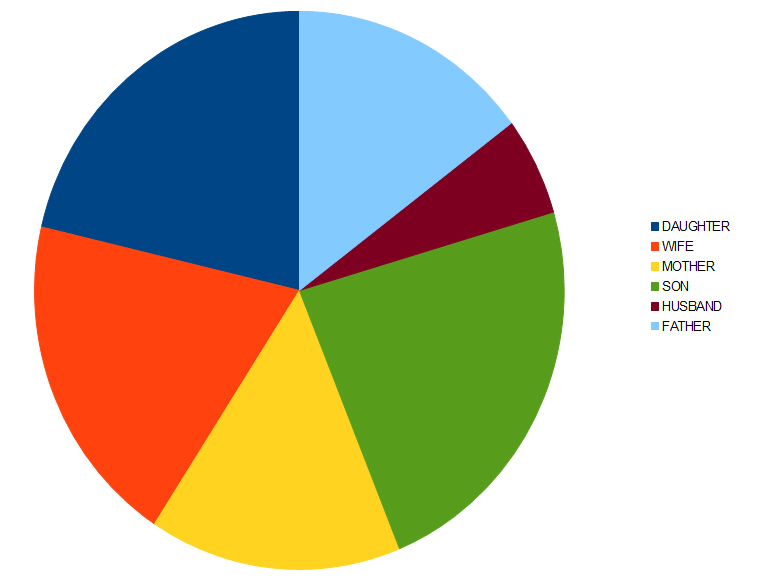 As suspected, there are lots of daughters and wives in fiction titles, but there some fathers and mothers, too. Most surprisingly, there are a ton of sons – you can see “sons” has the highest share of the above pie.

Okay, easy-peasy. Now let’s move on to the more difficult and I think more interesting questions.

2. Are these titles more common in certain genres of literature?

To answer these questions, I had to get my hands dirty with some advanced searching. The following data won’t be super-scientific, because Amazon doesn’t categorize its literature perfectly – I’ve found non-fiction in fiction genres and Harlequin romances in “literary fiction” – and there’s a bit of overlap between genres. For example, if The Madman’s Daughter were not YA but an adult book, it would be slotted in under “Horror,” “Historical Fiction,” and possibly “Romance” and “Literary Fiction.” I tried my best to separate different genres – you’ll notice when you look at the following graph that I separated regular historical fiction from literary historical fiction and romance-historicals as best as I could. 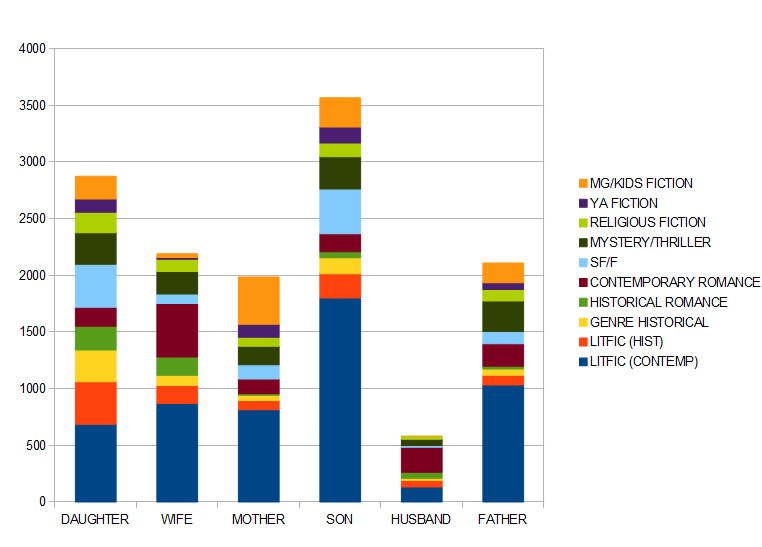 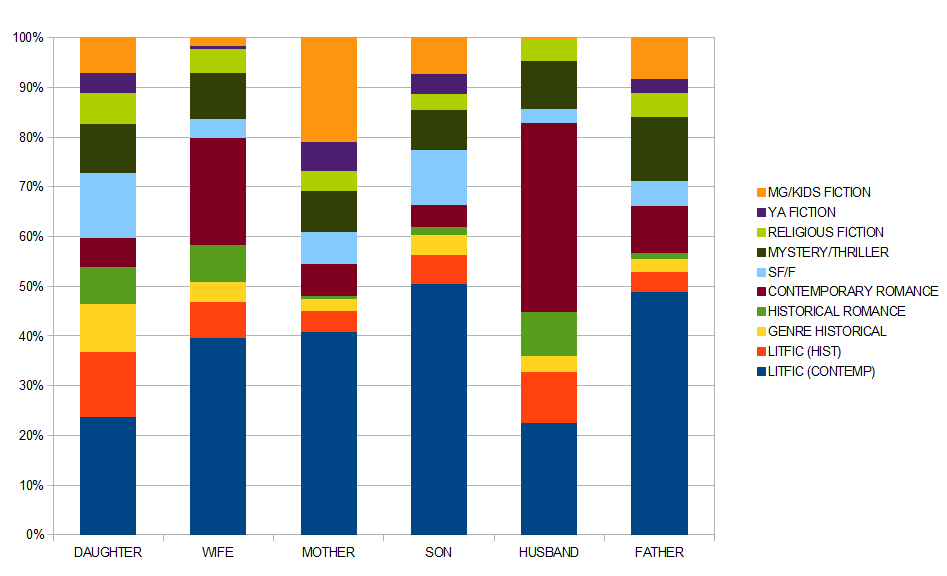 You can see that family-based titles are extremely popular in literary fiction, which might be why many of us get the impression that these titles are more popular than they actually are. Literary fiction is the kind of fiction that gets the Pulitzer Prize, the Man Booker, the prestige film that doesn’t actually do very well at the Oscars. I’m sure if you think for a second you can easily come up with the name of at least one big award-winner or Oprah book that has the name of some family member in the title.

Husbands were more likely to be seen in romances, just like wives, which is probably not too surprising seeing as the words “husband” and “wife” have to do with romance (or at least sex and hot hot paperwork).

Mothers were quite popular in kids’ books, although this number is inflated by the ubiquity of Mother Goose books. There were also more mothers than fathers in YA titles, which likely reflects the fact that most YA readers are women and girls.

Something that surprised me but made a lot of sense when I thought about it: daughters and sons were featured relatively frequently in science-fiction and fantasy. In these cases, the titles tended to be along the lines of Daughter of Time: A Time Travel Romance and Son of Eden. We’ll talk more about the significance of this type of title in a sec.

3. Do certain genders get this sort of title more than others? Is there sexism afoot?

To answer this question, I took a small sampling of titles from the first 3 pages of fiction within each search. So I typed in “fiction” for topic and “daughter” for title and analyzed the first 36 titles that popped up (not including same-named sequels). I first counted all titles that followed the format (The) [Blank]’s [Family Member]. “The” is in parentheses here, because I also counted books without the definite article (Pharoah’s Son, for instance). The “blank” stands for some occupation or proper noun, and “family member” stands for a family member like “wife,” “daughter,” etc. Examples include The Vampire Hunter’s Daughter, The Witch Doctor’s Wife, Liberty’s Son, The Forest Ranger’s Husband, and The Rabbi’s Mother. 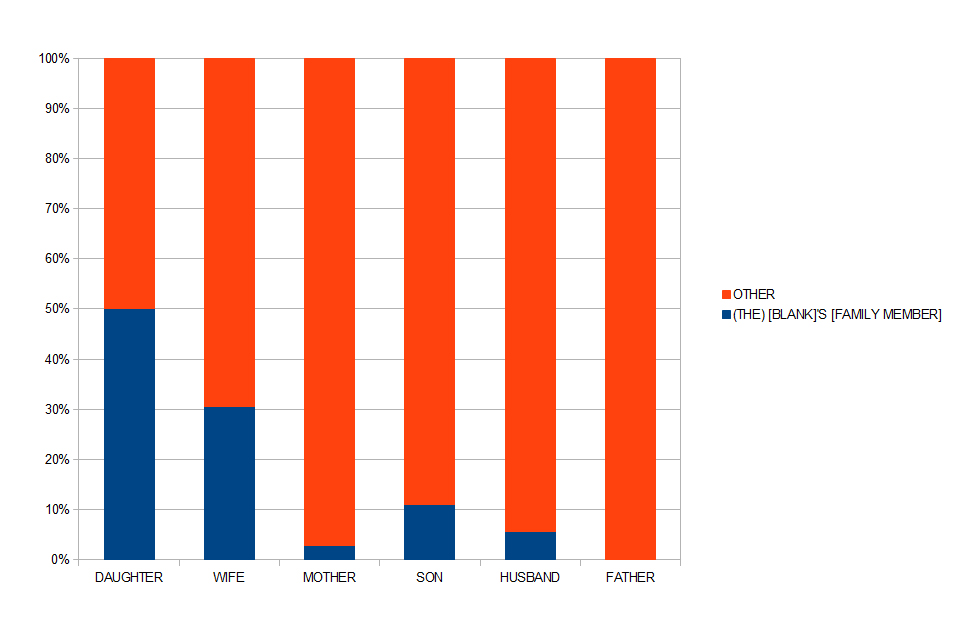 As you can see, daughters get the worst. My hunch was right: The [Blank]’s Daughter is the most popular, followed by The [Blank]’s Wife. The two parents got almost no action in this template (just one The [Blank]’s Mother and no The [Blank]’s Fathers). Husbands also weren’t popular in this kind of title. If you peruse Amazon, you’ll see that most “husband” books have a female protagonist, not a male one. These books aren’t about the husbands. They are about getting the husbands (or getting revenge on them).

Interestingly, there were few sons in this kind of title. As mentioned above, sons are the most popular family members in fiction titles, but those titles are almost never The [Blank]’s Son.

The reason for this is that “son” tends to be popular in [Family Member] of [Blank] titles like the aforementioned Son of Eden. In fact, 8 of the 36 son titles I looked at followed this form. That’s 22%, not minor. In almost all of these titles, the “blanks” stood for a place, as in Augustus: Son of Rome, or a concept, as in Sons of Encouragement and Sons of Blood. Where the blank stood for a name, it was never the name of the son’s actual, physical father. Instead it was a symbolic name, as in Sons of Cain.

Some examples of “relationship” titles:

Some examples of symbolic titles:

I also found I had to make a separate column for “clergy,” because there were a significant number of titles that used “Father” in the ecclesiastical sense. These I couldn’t really count as either relationship titles or symbolic titles. In these cases, the “father” was actually the protagonist, and “father” was part of his name.

In fact, one gender is not more likely to be “relationshipped” than the other. As a matter of fact, the numbers came out almost equal for the two genders. Husbands and wives were both considered relationship fodder 100% of the time in my small sample. Sons and mothers were most likely to be symbolic. Daughters and sons tended to be in symbolic titles when they were in science-fiction/fantasy books, I guess because in comparison to galaxies and elves, we humans are pretty young. Someone less charitable toward the speculative fictions might say it’s because SF/F tends to be more childish. (To which I stick out my tongue and say, “So?!”) If we have to say one thing about gender, it’s that daughters are a bit more likely to be defined by their relationships than sons, which is, as we say in the literary world, poopy.

4. Is The Such-and-Such’s Family Member really that common a title anyway?

Ultimately, family-based titles aren’t as popular as we think. Though it may seem that every other book is named The Such-and-Such’s Wife or Son of the Cool Thing, they make up only slightly more than 1% of the 1.7 million works of fiction released on Amazon since April 2008. Here’s a graph: 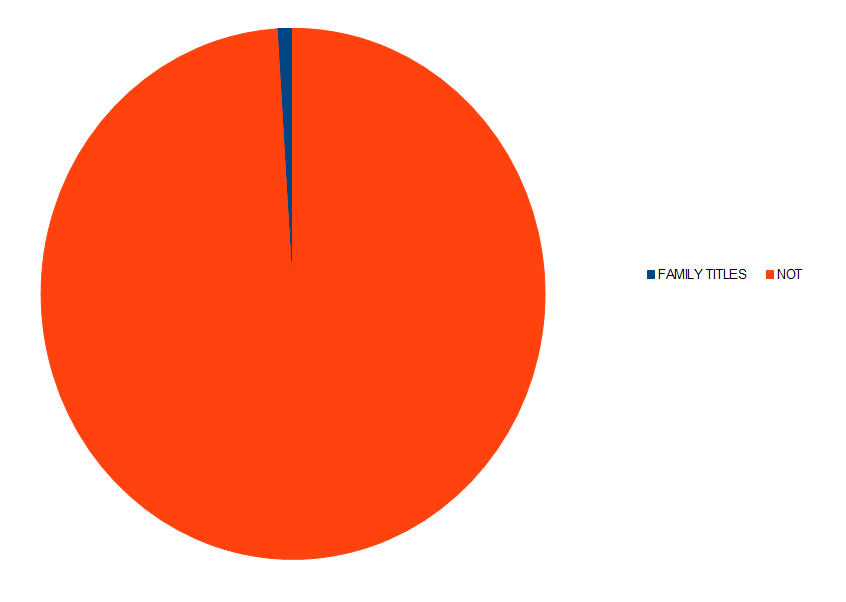 That said, slightly more than 1% is still more than 20,000 books in only five years. So although I’m not about to criticize writers and publishers for being unoriginal with their titles, I can’t really argue if you decide to.

Do you think today’s book titles are too unoriginal? Sound off below in the comments!