Blanket Spoiler Alert for The Avengers and The Dark Knight Rises. If you have not seen these movies, this article will ruin your blanket. You have been warned.

The summer of 2012 saw the premiere of two major superhero movies: The Avengers and The Dark Knight Rises. Of course, both being superhero movies it’s only logical that they would have a certain number of things in common – tropes of the genre that make it what it is instead of, you know, something else. There were plenty of extra-diegetic similarities as well: both were directed and co-written by well-respected auteurs (Joss Whedon and Christopher Nolan respectively), both were the culmination of film series that had led up to these as their climax (in DKR’s case it was the final volume in Nolan’s trilogy that started with 2005’s Batman Begins; with Avengers it was the ultimate assembly of characters and plotlines that had been being pieced together since Iron Man in 2008).

But one major correspondence between the two blockbusters is also either a baffling coincidence or an incredible synchronicity (or both): they each have the same damn ending.

So that’s weird. And it hasn’t gone uncommented upon. How could it? However, it seems to me that by comparing and contrasting the nearly-but-not-quite-identical third acts of the two movies, we can gain some fascinating insight into not just how Iron Man and Batman differ as humans and as heroes, but also some of the fundamental oppositions between the thematic and ideological divergences of the two franchises as a whole. 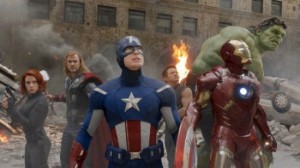 What happens is this: in both Avengers and Dark Knight Rises, there’s a nuclear bomb threatening the city (in the former it’s New York; in the latter, Gotham). In both movies, the hero, a multibillionaire industrialist empowered with absurdly futuristic equipment (Iron Man and Batman respectively – I’m going to be using the word “respectively” a lot in this article, aren’t I?), uses their rocket-powered technology to fly the bomb away from the city and save the lives of millions of people. In both, the hero is apparently killed in this act, but actually survives.

It’s a pretty remarkable resemblance. And it definitely says something about the nature of superheroes tropes and what we want and expect from our society’s protectors. More interesting, though, at least to me, are the ways in which these very alike denouements diverge.

First of all are the origins of the nuclear devices in question. In DKR, it’s created from a fusion reactor that was developed by Wayne Industries to be a source of clean and near-limitless energy; when Bruce realizes that it could – and likely would – end up being used as a weapon, he shut down the project, but, of course, it nevertheless ends up in the hands of the evil Bane, who predictably does intend to use it to destroy Gotham. On the other hand, in Avengers the threat is from a missile launched at New York by the United States’ government; the government believes that the Avengers have failed to thwart the alien invasion currently occurring and hope that the bomb – though they know it will kill millions – will also destroy the mystical portal being used by the aliens to attack Earth.

The very disparate causes of the nuclear threats in these cases speak to the opposing attitudes these films have toward notions of authority. DKR has been largely seen as a not-particularly-veiled critique of the Occupy movement and its perceived indiscriminate rejection of authority and laying the blame for their ill-defined problems on the so-called “one percent.” In DKR, Batman has restored order to Gotham City by sacrificing his reputation to the memory of the deceased Harvey Dent and cleansing the police force of corruption by the resulting ascent of archetypal Good Cop Jim Gordon. That is, in DKR the police are decidedly the good guys, Batman’s army representing the forces of order. The bad guys, led by juiced-up anarchist Bane, his legion of chaos, are Gotham’s own citizens. The ninety-nine percent become Bane’s willing executioners, joyfully turning the city into Ayn Rand’s worst nightmare and unwittingly allowing Bane to gain everything he needs in order to destroy them. 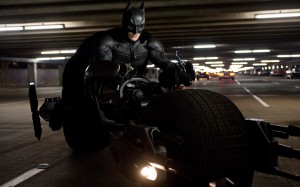 But in Avengers the situation is very different. It’s the government itself that turns its might against its own citizens – for utilitarian reasons and not malicious ones, they decide they need to sacrifice New York to save the entire rest of the planet – but it’s because they’ve lost faith in the Avengers that they themselves assembled under the auspices of Nick Fury’s arms-length military organization S.H.I.E.L.D.  The attitude toward authority in Avengers is ambivalent at best; the Avengers are recruited (mostly) willingly, and share in S.H.I.E.L.D.’s and the U.S. governments goals, but S.H.I.E.L.D.’s agents’ willingness to lie to the Avengers in order to achieve their goals is a blow to the already-precarious level of trust that the heroes have for the whole operation. Besides Captain America, the Avengers are all civilians and have very different ideas of what is necessary and what is permissible when it comes to protecting the homeland – or in this case, the home planet.

The attitude toward power in both films is investigated by means of a thematic pun – “power” functions both in the sense of authority and in the sense of electricity. Both Avengers and Dark Knight Rises include objects that are intended to provide unlimited cheap electricity: Bruce Wayne’s fusion reactor and the Tesseract which serves as Avengers’ MacGuffin, the object that both S.H.I.E.L.D. and Loki want to obtain in order to achieve their goals. What bears scrutiny is the fact that in DKR, Bruce Wayne himself stops all research into the fusion reactor due to the risks, despite its potential for benefit, and yet the continued existence of the reactor does in fact lead to the nuclear threat at the climax of the movie. Whereas the Tesseract never poses any such threat; the U.S. government, in that case, genuinely does want to use the Tesseract for peaceful purposes, but also wants to use it to create weapons, and the fact that the Avengers have been lied to about the government’s secondary, destructive purpose in their quest for the Tesseract is what causes the heroes to rethink their relationship with the authorities. But not only is the argument in favor of weaponizing the Tesseract actually pretty convincing in light of the events of the film – the fact that Earth is now very much aware of the existence of hostile aliens with vastly superior technology means that humans had better get to work on leveling the playing field if they want to remain safe and free – the threat to New York City at the end of the movie is not directly a result of the Tesseract at all. Loki uses it to open a portal through which the invasion begins, but the government’s solution is to attempt to destroy New York, thereby destroying the portal and the Tesseract at the same time; the government is not willing to risk losing the world to invaders even if it means potentially destroying the object they hoped to use to protect themselves from those very invaders.

So while the Avengers, as both de-facto government agents and simultaneously non-authoritarian forces, live out the complicated attitude toward authority in their movie at times supporting and at other times opposing the will of S.H.I.E.L.D., Batman, the “power source” of the threat to Gotham is contrastingly simple in his attitudes and goals – the very possibility of the fusion reactor being used as a weapon is enough for him to shut down the project. Batman considers himself to be the highest authority, and the idea that anyone else can use his power is abhorrent (and indeed his distrust is proven to be appropriate, since the citizens of Gotham turn on the forces of order as soon as Bane gives them the choice). The Avengers, though, have a more nuanced approach. They neither consider themselves as paternalistic authority figures, nor do they inherently distrust either the organization or the motives of the government they (occasionally) report to – even when they disagree with their methods to the point of actively opposing them.

How the heroes dispose of the bombs and save the cities in question is also similar but different: while Batman manages to fly the fusion reactor far enough off the coastline and over the Atlantic Ocean (Gotham is in New Jersey, apparently) that the explosion fails to kill anyone, Iron Man flies the government-launched bomb through the portal and uses it to destroy the alien invaders’ mother ship. Of course there was no way that Batman, under the circumstances, could have used his bomb as a weapon against that film’s antagonists, Iron Man could easily have simply flown his bomb out over the ocean. But he didn’t; instead, he again subverted the power of the authorities and channeled it in order to accomplish their mutual goal in his own way rather than theirs. That ambivalent relationship to authority is here demonstrated yet again; Iron Man and the Avengers don’t object to the use of weaponized nuclear power per se – they just want to make sure that it’s pointed in the right direction, unlike Batman, who apparently saw no possible positive use for his fusion reactor if it were weaponized even if it were in the hands of the U.S. government, because Batman sees himself as the only legitimate authority in the story, and even Commissioner Gordon, in a sense, works for him rather than the other way around. 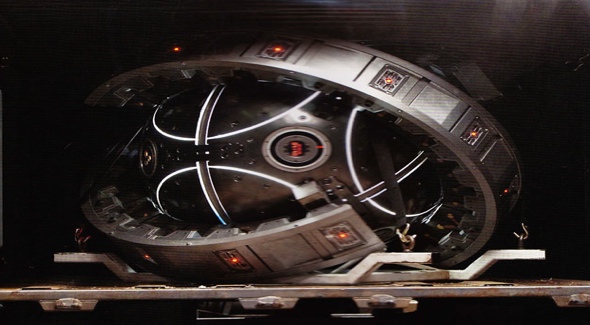 Finally, even their death-and-resurrection has this same contrast. Iron Man destroys the alien mother ship and then falls to Earth in the wake of the explosion and the dissolution of the portal. He seems, for a minute, to be dead. But it turns out he’s perfectly okay after all. Batman also survives the nuclear blast (his plane turns out to be remote-controllable), but he uses the explosion as an opportunity to fake his own death and go into retirement.  This, again, is all about authority. Just as Iron Man makes no effort to conceal from the public the fact that he is Tony Stark, the revelation that Batman was Bruce Wayne would be tantamount, in the Caped Crusader’s mind, to the death of both facets of his personality. By “killing” Batman, sacrificing the part of himself that has responsibilities due to the power of authority he wielded (because of having taken it for himself), Bruce Wayne is free to go on living. It’s implied that John Blake takes over as Gotham’s protector, that’s not because Bruce has done anything to pass the cowl to a protégé; apparently he decides that he’s done enough for Gotham, and leaves it to its fate. He can do this because authority, to Batman, is about maintaining control more than about protecting people as such – it’s an ideological concern rather than a humanitarian one. For Iron Man and the Avengers, it’s not the authority that’s important; they all need to be convinced to act as the government’s weapons and are all, at first, happier to let Nick Fury and S.H.I.E.L.D. deal with threats on their own, however they please. In The Dark Knight Rises, notions of power are fundamentally associated with deception and hiddenness – when truths are revealed, when people are unmasked, the result is destruction and anarchy. The world of Avengers, on the other hand, is in a sense democratic, viewing power as a dialogue between more-or-less equals (if occasionally a very heated one), wherein openness and honesty are what gives authority figures legitimacy. 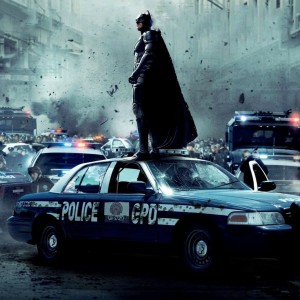 27 Comments on “The Nuclear Option: Batman, Iron Man, and Attitudes Toward Power”