Spoiler alerts for the current season of Downton Abbey. 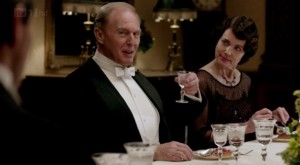 Sir Philip in his Surgery

Stokes: So yeah. Poor Sybil. As presented on the show, she dies of preventable eclampsia because the family (Lord Grantham, really) ignored the advice of the family doctor, who saw it coming and wanted to bring her in for an emergency C-section, choosing instead to follow the advice of a fancy-schmancy celebrity gynecologist from London, who denied the signs of pre-eclampsia until it was too late, and was worried that hospitalizing her would expose her to infections.

Where I think it gets really overthink-worthy, though, is that they make the specialist seem like such an asshole for not wanting to bring her to the hospital.  He says something about her being “exposed to some… infection,” and in the context I’m pretty sure you’re supposed to think that he’s worried she’ll be contaminated by sharing a ward with the common people.

But here’s the thing: puerperal fever was the number one cause of maternal death until the mid-1930s!  And although we’re supposed to think that the specialist is an asshole, again, for telling everyone that they shouldn’t be too eager to intervene, in fact over-eager intervention was a major cause of maternal death. (America, which at one point banned home birth, and aggressively pushed intervention, had the highest maternal death rates in the late 19th century as a result.) And to suggest a C-section… one figure I sound suggested that C-sections in a standard American hospital in 1926 had something like a 13% mortality rate. Now, it could be that America was still really shitty at childbirth. But even so, the death rate for eclampsia in the developing world today is somewhere between 5% and 10% (for the mother, that is, although 28% of the infants, die), and apparently no really effective treatment for eclampsia was introduced until the 1950s.

The whole “preventable eclampsia” thing is bunk, by the way:  we still can’t really prevent it, although it seems to involve an allergic reaction to the father’s genetic material, and some recent research from the Netherlands tentatively suggests — according to Wikipedia, mind you — that the best way to prevent it is to ensure that the woman is exposed to her partner’s semen on a regular basis for several years before trying to conceive. Preferably orally. My source on this again is Wikipedia, but they backed it up with no fewer than six citations — probably because it looks so transparently made up.

Furthermore, although the family doctor is very definite that Sybil will go into an eclamptic seizure unless they perform the C-section, this actually only happens in 2-3% of women with severe pre-eclampsia, which works out to slightly more than one-half of one percent of all pregnancies. So the specialist is right to say that it’s a very rare disease.

Adams: Yeah, I should have been more clear when I was talking about eclampsia on the Recap — according the Wife, NNP, they monitor expectant mothers and can detect the signs of preeclampsia relatively early on. There are some treatments that can reduce the symptoms, and if it looks really bad, they induce labor (or do a modern, less fatal c-section) thus (hopefully) avoiding the worst of the symptoms.

So yeah, it’s still a big issue, but it doesn’t kill nearly as many people.

Relevant to the expert v. non-expert, check out Ignaz Semmelweis.

It wasn’t accepted until after Semmelweis’ death, but in hindsight the explanation was obvious: clean hands. The medical students would go directly from dissection of cadavers to delivering babies, bringing all the germs with them. The medical establishment, however, refused to accept for a long time that it was their grubby hands that was killing the patients.

One thing that I think argues strongly against the decision made by Grantham/Dr. Fussypants is that they could have taken Sybil to the hospital without making the final C-Section decision. It wouldn’t have been as nice or idyllic as birth at Downton, but they would have already been at the hospital if they had decided to change their mind and do the C-section.

As far as the decision itself, I have to go with both Dr. Clarkson and Gimli from Return of the King: “Certainty of death. Small chance of success. What are we waiting for?”

Wrather: Ben, I really hope you call her “Wife, NNP” at home.

Jordan, I think that your point about the “Patch Adams” lesson is right as far as it goes — it does yoke together rather an “incoherent set of oppositions”, though I’m not sure that all the ones you mention really obtain (especailly young/old, as Clarkson is by no means just out of his residency). He is also not JUST a family doctor, he’s truly a medical expert in his own right (all the trauma surgery and rehabilitation in Season 2), and notably cautious and circumspect (breast lump subplot with Mrs Hughes). So I put his seemingly magical diagnosis down not just to a shaman’s intuition, but rather to something like a Gladwellian Blink, which is when you close your eyes for ten thousand hours. Or something.

I mention his expertise because it’s related to the larger project of the show, which is to undercut the myth that aristocratic men of goodwill — two, this time! working in concert! — can do no wrong. I talked during the recap about one definition of modernity which seemed relevant ad hoc to this particular show: It’s that inflection point in history beyond which an individual can’t solve his own problems because they involve intellectual or sociopolitical structures beyond a human scale. Season 1 was a chronicle of the emergence of not just a middle class but a class of professionals (Matthew is a lawyer) — it will come up again this season as Matthew unfolds his plan to “modernize” the estate (though, spoiler alert, what this means in point of fact is left vague for the rest of the season, though by the Christmas special we are to understand that it has been accomplished).

In the face of the new professional expertise, and in the face of the dislocations war wrought in Season 2, Robert doubles down on his old thinking. The decision not to take Sybil to the hospital, as you point out, is justified in terms of aristocratic pudeur and shock that someone would question Sir Philip’s authority, not in terms of playing the odds. When he says, “It’s an uncommon disease,” he’s being a prig, not a statistician. Robert makes a point of pointing out how many (high class) babies he’s delivered; but he’s like the doctors in Ben’s story that won’t wash their hands: He seems to practice medicine as an extension of aristocratic goodwill; I’m betting he’s never browsed PubMed in his life.

So I think what’s at play here is not a kind of nostalgic sentimentalizing of simple folk and their ways (the show does indulge in that from time to time, but more with the people downstairs, esp. Mmes. Hughes and Patmore). I read it more as privileging a technocrat’s views over an aristocrat’s.

Adams: Matt, your discussion about modern problems that can’t be solved by an individual reminded me of this book

Basically, a guy tried to build a toaster (an extremely simple device by modern standards) entirely from scratch. The result: It worked barely and badly. Even then, he couldn’t get everything himself. Anyway, the point is that he uses the toaster as a symbol of a modern world where no one really knows how to do anything. Even for something simple like a metal box that has hot wires in it, there’s probably no one on the planet that can build one working entirely alone. Something like a computer is like that times a million: there’s no one that could build even a component part of it acting alone, or anyone that understands the entirety of the code running on it.

I bring all of this up to point out that Mrs. Hughes’ toaster has its own Tumblr:

I had the dial up too high. via

I can’t help but wonder if the Downton Abbey people read the book (the author is British) and decided that the toaster was the perfect symbol of modernity for the show.

Stokes: With respect to young vs. old, I wasn’t thinking young young, but I do think its no accident that the specialist has more grey in his hair than Clarkson does.

With regard to the science vs. authority issue, I think the show is very consciously playing it both ways. Clarkson’s is the more evidence-based approach (in that he pays attention to her symptoms), and that’s science in a nutshell. But although we certainly have no reason to suppose that Clarkson isn’t an excellent doctor, nobody ever brings that up in his defense. Within this episode, at least, it’s “Damn it, man, I know those ankles! I dandled those ankles on my knee!” And that’s not the how technocrats roll. The whole point of technocracy is that systematic knowledge trumps intuitive knowledge: it’s moneyball over talent scouts, it’s pills and electroshock over the talking cure, it’s House MD and CSI. Technocracy is an authoritarian stance, but the writers want to make it touchy-feely so that they can oppose it to aristocratic authoritarianism. Technocracy with a human face, I guess you could call it? (Which is funny, of course, because the show is generally so deeply committed to aristocracy with a human face.)

An actual technocrat physician at the time would be saying, as Clarkson does, “we need to get that baby out NOW!” But instead of a C-section, they’d likely be reaching for the chloroform and the forceps (which had a horrendous death rate). The medical plot would have been far more coherent if Dr. Von Starchenshirt was the one saying “we have to operate,” and Clarkson was advising restraint. But the problem is that, as you say, the decision of what to do about Sybil is meant to parallel the decision of what to do about Downton’s finances. Heroic measures must be taken! We can’t just let the estate/her body sit there and rot! The fact that heroic measures are sometimes a really, really terrible idea is an inconvenient truth of history that the writers have chosen to ignore… at least within the confines of this particular episode.

Wrather: Yeah, I think you’re right about the show having its crumpet and eating it too. Zing.