The passion. The spectacle. The music that shaped a generation. Les Misérables. Is the name. Of that musical. Which is also a movie.

Overthinking It proudly presents our musical tribute to our favorite scene in Les Misérables*, Anne Hathaway’s ascent to a cathartic height of pathos in “I Dreamed a Dream” — and to her brave, enduring, tragic struggle from actor, to star, to star actor, and to whatever comes next. For in the life’s work of the thespian, a truly great scene lives in you and consumes you for a moment, then is gone, leaving you with only echoes of remembrance.

We give you “I Scened a Scene”: 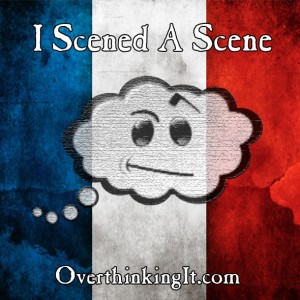 I scened a scene of time gone by
When shows were meant to see in person
Where you could touch the tears we cried,
And remakes didn’t always worsen.
Then I was young and was in plays
In classics mounted, done and stricken,
There were no phoned-in shooting days
No beat unfelt, No plot unthickened.

But the Bride Wars come at night
What a huge atrocious blunder
Yes, it tore your hope apart
And it turned my dream to shame

He said be in Les Miserables
He gave me the show-stopping number.
He let me scream and hope and sob,
But he was gone once I was paid.

And still this scene, it comes to me
The scene that gave me taste for Oscars
Is this the best that I will be?
The shooting star to grace my roster?

I had a legendary scene!
So different from this crap you’re seeing!
And you all wept and cried with me!
Now it is done, the scene, I scened.

8 Comments on “I Scened A Scene – A Les Miserables Parody”