Sweaty, weeping and exhausted, as you either march, flag raised or plunge in existential horror after Tom Hooper’s new Les Miserables film, you may ask yourself, “What just happened?”

Well, for those kind of questions, there are no answers quite like charts. So let’s get to it!

More than in most films, the performances in Les Miserables each go on a singular journey — there are huge gulfs of tone, with the actors bringing different tools and the direction different priorities to a story already crisscrossed with plotlines of disparate scope. Using subjective judgement and an arbitrary 10-point scale, and covering the movie’s nine most important performances (with Cosette and Eponine treated as single performances, albeit by two actors each) I compiled this master table: 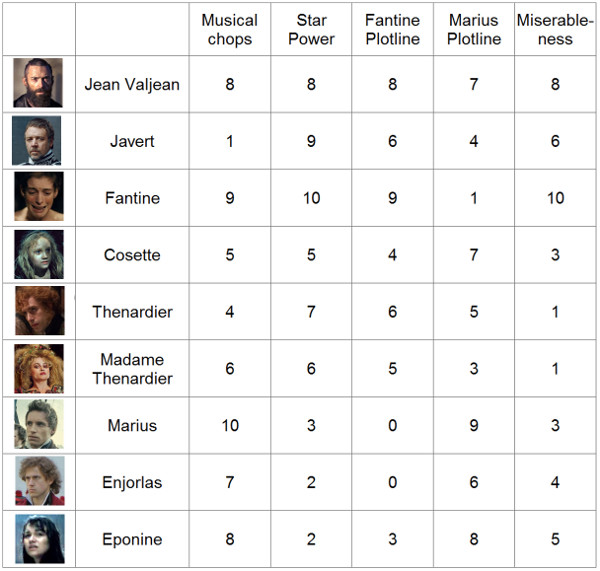 These are my impressions based on seeing the film — they are not just how the character might or ought to be according to the musical or text, but how I experienced them from the audience. Some definitions:

Taking the values from the table and stripping out the plotline data sets, which are there to search for correlations across variables, here’s a summary chart of the vitals of each performance, again, entirely subjective, in arbitrary units (I would have done it in bleu, blanc and rouge, but blanc doesn’t show up well in charts): 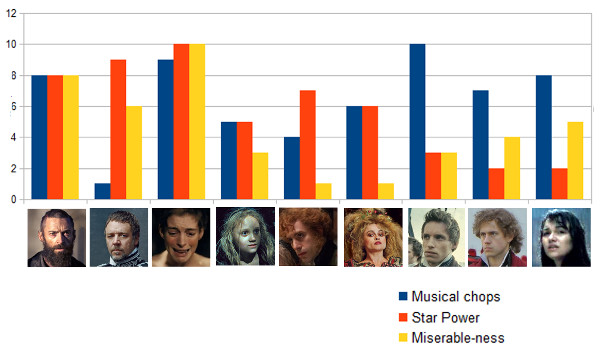 Some values deserve some explanation — Amanda Seyfried, who played adult Cosette, is certainly a star, but I didn’t feel that presence much in this movie. Helena Bonham Carter is probably more than one arbitrary unit better at singing than Sacha Baron Cohen in this movie, and less than a full arbitrary unit behind him in star power (it’s debatable she might even bring a bit more star power to her role than he does to his, although he is currently the bigger star with the bigger part), but I was constrained by the number of significant digits in my arbitrary measurement instrument readings. As for Miserable-ness, Cosette, Eponine and Marius are certainly sad parts at times, but the bright, youthful, almost Glee-ish prettiness of the performances in the movie drew off a lot of that intensity for me. Russel Crowe, whose character isn’t that sad most of the time, brought a lot of weight to his role, even if his singing skill is out of place next to all the trained musical theater actors and is more appropriately measured in Foot-of-Grunts. And yes, he gets a 9 on star power. It’s why he’s there.

The chart does a decent job of visualizing what is going on in the movie — a solid performance by Jackman, a standout performance by Hathaway, and then choppy performances across the board with a few points of excellence and vastly different priorities. After coming up with the values, I wanted to see how they correlated with my sense for the two plotlines in the movie — I had my hunches, but I wanted to be able to show them: 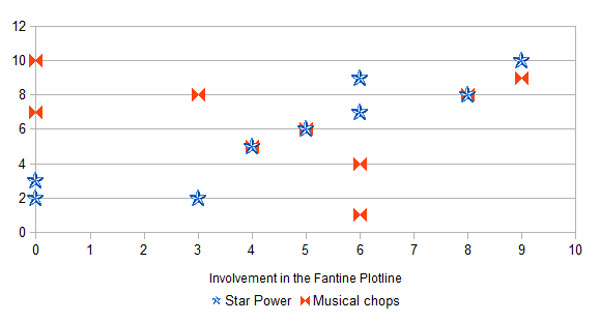 Sure enough, the bigger stars in the movie lean toward the grim, poverty-driven Fantine plotline, with a pretty clear upward trend of increased star power as participation in that plotline increases. Musical chops didn’t have as major a correlation here as I expected. (Miserable-ness turned out to be a silly variable that just made the graphs look muddled and made it harder to choose cute icons, so I stripped it out for these slices.) 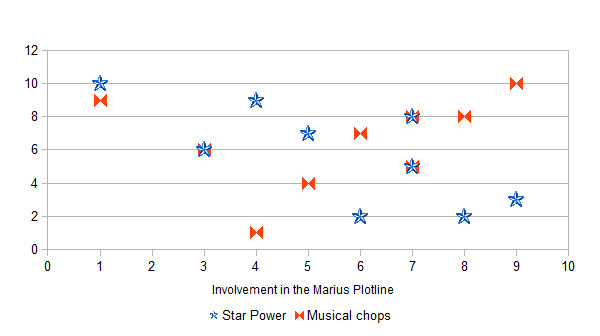 The Marius plotline isn’t exactly symmetrical — there is both a downward trend of the bigger players in the plotline not being as big stars, and, if you kind of wave off the Hathaway outlier (and this is an arbitrary measurement, after all, why not more), the stronger singers appear to hang out at the barricades.

I understand I have my own perspective on this movie, informed by the fact that I’m a 32-year old man, that this was the first time I saw the show and that I’ve seen Virtuosity at least four times. How did your take on the movie differ, and what conclusions would you draw from your own data set? Sound off in the comments!

16 Comments on “Can You Hear the People Graph Les Miserables?”