Watching The Hobbit: An Unexpected Journey from the front of an IMAX theater felt familiar—the comfortable art and production style of the Lord of the Rings films are writ large—but it left me with two very powerful emotions that I think drive to the heart of what this movie is trying to accomplish, both on its own and part of the Middle-Earth imaginations of Peter Jackson’s posse: I felt very high, and I felt very hungry. 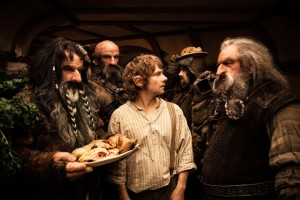 Hungry, of course, because of the cheese wheels as tall as a man on the IMAX screen, or jars of scones that would make reasonable above-ground swimming pools. The Lord of the Rings movies make joke and reference to the hearty Warwickshire fare of The Shire—and the penchant of halflings for multiple dinners and breakfasts. But in The Hobbit, the characters eat. And eat and eat and eat.

And high of course not because of Gandalf’s pipe weed or Radagast’s magic mushrooms, but because of the dozens of great heights or falls—flying shots of vast chasms, roaming tours of bottomless underground vaults, and Eagle Ex Machina flyovers of the vast expanses of air under truly giantic cliffs.

Seriously, this movie gets high. Characters stand on the edges of precepices in at least ten different scenes. The throngs of enemy henchmen hurtling to their deaths over railings and catwalks rival the American Ninja series. Bad guys fall a lot, and good guys “almost fall” a lot more.

Both of these factors are present in The Lord of the Rings films, but not in anywhere near the degree to which they dominate and inform The Hobbit.

There and Back Again

This is all about the heart of The Hobbit—not the ring, not the dragon, not even Bilbo’s own experience on the open road—the heart is at Bag End in Bilbo’s house. Plenty of movies introduce a safe home and contrast it with a dangerous world on the outside—but The Hobbit does it very directly, creating a sense of the journey from Bilbo’s perspective by not just showing us something different from Bilbo’s home, but by showing us the exact opposite.

Bilbo lives in a comfortably shallow Hobbit hole and is short and close to the ground. Height is about as foreign to him as a concept can get.

And Bilbo is not shown in The Hobbit to be a ravenous eater. Instead, in a lovely scene, we watch him delicately and patiently prepare a fish for his dinner, which we are to understand he will eat slowly and savor. Biblo is not fat, and one wonders why his pantry is sufficiently stocked for a dinner for 14 when he lives alone and appears to not eat so extraordinarily much at all.

No, Bilbo’s packed larder does not show his love of eating; it shows that he is never hungry.

The direct contrasts here are found throughout the film: the dwarves feast and sing and eat cheese by the wheel; the trolls have a sympathetic human fondness for seasoning their pseudo-cannibalistic stews and kabobs—and get caught in argument and misdirection over it until they go unfed and turn to stone; Gollum relishes the goblin he beats to death and eats in front of Bilbo with a horrifying sensuality‚ and even the Smeagol side of Gollum seems excited at the prospect of eating Bilbo should he lose the riddle contest.

And, of course, the party is hounded by wolfish wargs and warg-riders who have given up the power of speech they exhibit in the book for pure animal hunger—they chomp through trees as readily as through flesh. Radagast leads them away with his rabbit sledge, and we all know why dogs chase rabbits.

(Fish and rabbits are important symbolic foods across the Lord of the Rings franchise as well: they are the two foods that Sam and Frodo share with Gollum in Mordor. If we see sparing Gollum’s life as the central dramatic act of the whole body of work, this is very important.)

I want to be clear that I am talking about the movie here. While the project seems enough of a collage of disparate priorities to resist attribution to a single auteur, this is an interpretation in the film medium of senses and sensations that are present in the book and work in slightly different ways.

Certainly there is lots of food and song in the book The Hobbit, and certainly there are treacherous mountain passes, but the advantage in prioritizing these elements in a movie is they provoke a visceral reaction from an audience because of our involuntary reactions to seeing these things. 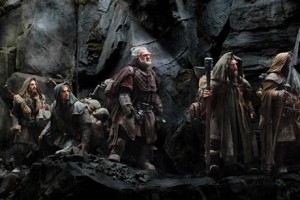 Perhaps the most understated moment in the movie is the morning after his unexpected party, where Bilbo decides he will drop his resistance and chase after Thorin Oakenshield’s party, on to his adventure. It is never explained to my satisfaction why this happens, but there is a powerful, knowing shot of Bilbo’s empty and depleted dining area as Bilbo makes his decision.

The way I see it, all the food has been eaten, which introduces a new element to Bilbo’s life: wanting something he doesn’t have. Bilbo connects the absence of his food in his house to the absence of his new friends and their quest, finding a hunger for companionship adventure in his heart that had been dulled by decades of plenty.

It’s a great example of saying something with images rather than words, and a good example of what being a movie can add to the story of The Hobbit such that, as it continues, it is hopefully not just a series of “almost-as-goods” lost to the inadequacies of cross-media translation, but an addition to the overall work, a contribution from what film can say and text really cannot.

7 Comments on “High, Hungry or Hobbit?”