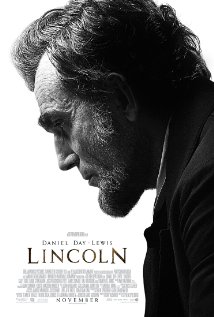 [Correction: the tables and statistics have been updated to accurately reflect the 34 states that were in the Union and Confederacy at the start of the Civil War.]

The movie Lincoln is, by any measure, a hit with both critics and fans. According to Rotten Tomatoes, 90% of critics give it favorable marks, it’s slated to pass the $100 million mark at the box office this weekend, and IMDB users give it an 8.4 rating. Even the hard-to-please OTI podcast panel was unanimous in its approval of the movie.

But is the movie widely loved across the United States? The movie portrays the Confederacy unsympathetically and places the slavery issue front and center. In the South, Confederate apologists have spent 150 years trying, to varying degrees of success, to place the Confederate cause in a positive light, one that emphasizes states rights and Northern aggression and downplays slavery and racial animosity. (One example of this movement is the 2010 proclamation of “Confederate History Month” in Virginia which made no mention of slavery while calling on Virginians to “understand the sacrifices of the Confederate leaders, soldiers and citizens during the period of the Civil War.”) It’s hard to say how prevalent these views are, but they certainly exist in the former Confederate states. And if they do, it’s not much of a logical leap to suggest that audiences in these states might not be particularly enthusiastic for the movie Lincoln. 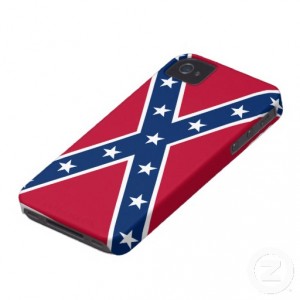 If you have a rebel flag iPhone case, you might be a redneck. And you might be less likely to see the movie “Lincoln.”

Can we prove this quantitatively, though? I scoured the Internet for state-by-state box office statistics, but came up empty. So lacking those numbers, the answer is no, we can’t. But we can try to use proxies like Google searches to gauge the differences in popularity of the movie Lincoln among US States.

I used Google Trends to return state-by-state search statistics from September 9 to December 7, 2012. The search term “Lincoln” was too ambiguous; it resulted in too many false positives in states like Nebraska and Rhode Island that have prominent cities named “Lincoln.” So I used the name of the starring actor, “Daniel Day Lewis,” as the next best proxy. Granted, this is an imperfect method at best, and a misleading one at worst. But lacking any other state-by-state data on movie popularity, it’s the only option on hand, so let’s roll with it.

Statistics of the DDL, by the DDL, for the DDL.

First, let’s take a look at the state-by-state results for “Daniel Day Lewis.” The following table shows Google’s normalized calculation of search popularity by state, relative to the state with the most (normalized) search activity. I limited the results to just those states that existed at the time of the Civil War: 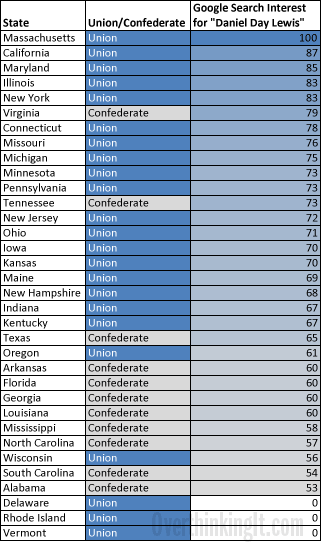 Note that just because Delaware, Rhode Island and Vermont show up as “0” on this chart doesn’t mean that anyone in those states was searching for “Daniel Day Lewis” during the time period. It just means that the volume of searches, relative to the overall search activity in those states, was too small to register in Google’s calculation.

Eyeballing this chart, it’s pretty clear that Union states dominate the upper half, while Confederate states dominate the lower half. The aggregated numbers support this assessment: excluding Delaware, Rhode Island, and Vermont, the average value for Union states is 74.20, while the average value for Confederate states is 61.73.

Based on this broad assessment, there seems to be a clear regional difference in Google searches for “Daniel Day Lewis,” but is that just because people in Northern states are more likely to search for leading actors in their movies? To test this, I applied the same methodology to the actor Robert Pattinson of Twilight fame to see if the same geographic disparities existed for this less politically charged topic: 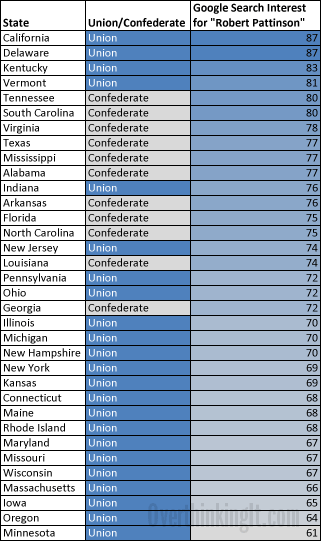 In this case, the Union average is 70.25, while the Confederate average is 76.45. Obviously, it would take a more thorough examination of state-by-state search habits to say anything definitive on this, but for the scope of this article, let’s proceed with the idea that Union states are searching more for “Daniel Day Lewis” than Confederate states.

We could end the analysis on that note, but I did think of one other way to assess the degree to which the former Confederate states are adverse to Lincoln, and that is of course, slavery. The hypothesis is that Confederate states that had larger slave populations had more to lose from the Civil War and the passage of the 13th Amendment, and that lingering animosity in those states translates to less interest in the movie Lincoln.

A basic linear regression that plots the percent of populations comprised of slaves and Google searches in “Daniel Day Lewis” reveals a negative correlation between the two: 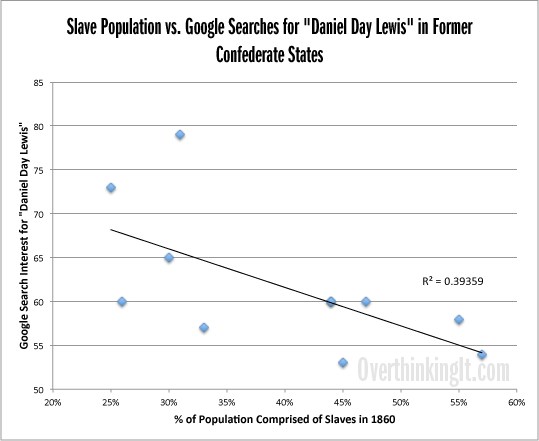 In other words, the more slaves there were in a former Confederate state, the less searches there were for “Daniel Day Lewis.” Here’s the data for the graph above in chart form: 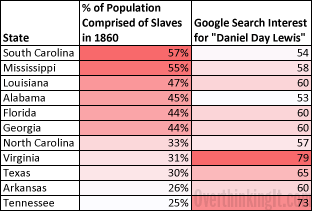 I should be very clear about the conclusions that we can and can’t make from this data. We can say that state-by-state slave population levels in 1860 do have a negative correlation with state-by-state Google search interests for “Daniel Day Lewis.” Without additional data, we can’t take the logical leap and say that this data proves that states with higher levels of Confederate sympathies are less receptive audiences for the movie Lincoln, although the data that we do have on hand is consistent with such an idea.

So where do we go from here? Obviously, if we had state-by-state box office numbers, we could answer this question definitively, but without it, there’s still plenty to talk about. Was my methodology sound? Is there a better proxy, Google or otherwise, to measure state-by-state interest in a movie? Is there a simpler explanation to all of this–that Lincoln is targeted at a higher-income audience, and that such an audience is less likely to be found in the South by nature of per-capita income and education levels? If you live in a former Confederate state, do you have anecdotal evidence of Lincoln’s popularity, or lack thereof? Sound off in the comments, for you are the readership of Overthinking It, clothed in immense power! 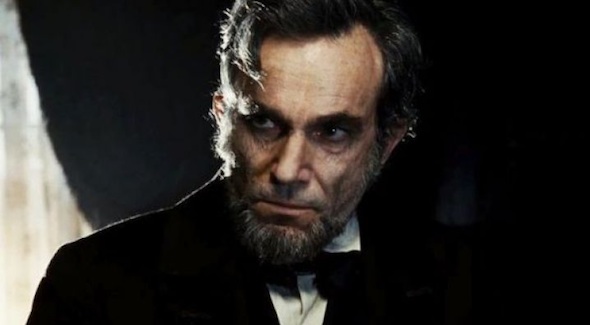 27 Comments on “Is the Movie “Lincoln” Less Popular in the South?”