You know the feeling. You’re going about exploring the galaxy and performing diplomatic functions on behalf of the Federation when danger and uncertainty start to creep up. Maybe it’s just an anomaly, or a derelict Bird of Prey, or a bad headache. But at some point, the danger makes itself clear, and you have no choice but to signal this to everyone in the least ambiguous terms possible.

Time to go to red alert.

Recently, in the Overthinking It writers’ back channel, we were asking ourselves the question: just how dangerous was it to serve on the Enterprise as depicted on Star Trek: The Next Generation? Weren’t they constantly under attack from Romulans, The Borg, and those nefarious space entities? Or was the Enterprise supposed to be more of a scientific, diplomatic vessel that happened to get into messes from time to time?

To answer that question, we retuned the OTI tachyon beam to analyze transcripts of all 176 episodes, look for occurrences of the phrase “yellow alert” or “red alert,” and categorized each episode by the presence of one or both of these alerts.* It turns out that 61% of all episodes had no alert whatsoever, and that only 32% of all episodes made it all the way to red alert. 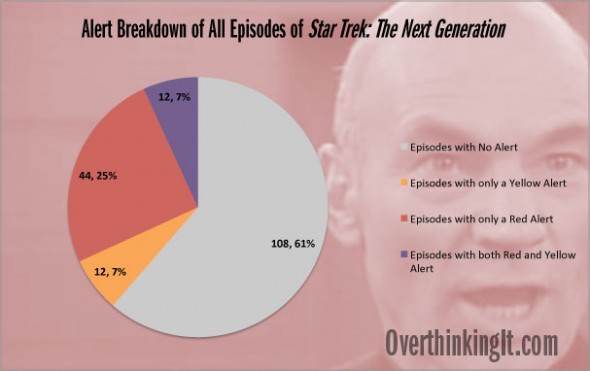 This may be more frequent than a typical naval vessel reaches its highest level of alert during an ostensible peacetime mission, but at least for me, it was less frequent than I was expecting, given the amount of peril I remembered the Enterprise encountering.

So with this big picture breakdown in mind, let’s see how those alerts were distributed across the show’s seven seasons and if there were any trends in the prevalence of alerts: 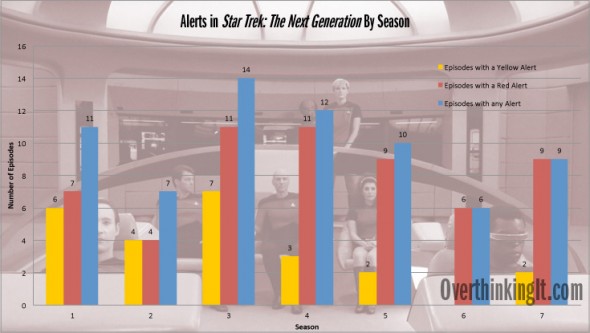 It’s hard to discern any real trend in alerts across seasons from the data, but if there was one, it would go something like this: alerts dipped from Season 1 to Season 2, then jumped up in Season 3, which had the most episodes with an alert among all seasons. From there, Seasons 4-6 saw a steady decrease in episodes with alerts, before the prevalence of alerts spiked in Season 7, the last season.

I can only speculate as to the reasons behind these trends. Maybe after Season 3, Starfleet started sending the Enterprise on less dangerous missons in safer parts of the galaxy. Or maybe Captain Picard, realizing that going to an alert no longer inspired the appropriate level of urgency from his crew, increased the threshold of danger that constituted an alert in order to summon them less frequently. Or maybe the writers got more interested in exploring Picard’s sensitive, flute-playing side at the expense of alarm klaxons and battle stations. 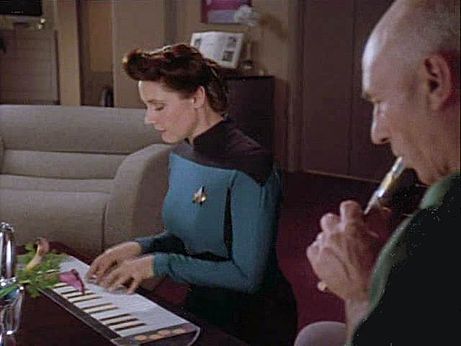 Season 6, Episode 19: “Lessons.” No yellow or red alerts in this episode.

Now, let’s take a look at the trend of alerts with the arc of a season. Did earlier episodes or later episodes tend to have more alerts? I grouped episodes across seasons roughly into quarters and found that episodes in the first two quarters of season were far more likely to have alerts than those in the last two quarters. 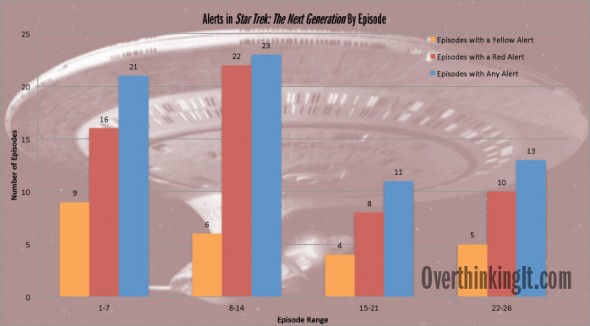 Coming up with an in-universe explanation for this is pretty tough (were the Romulans coordinating their attacks for a certain time in the year, perhaps to coincide with new crew rotations from Starfleet Academy?), but an out-of-universe explanation quickly comes to mind: perhaps the show’s producers were concerned with bringing viewers back for new seasons, so they made sure to pack those alerts into the earlier episodes to lure them back. Once they’ve settled back into their weekly routine of watching the show, they’ll be more accepting of episodes with complicated archeology-driven ret-conning. 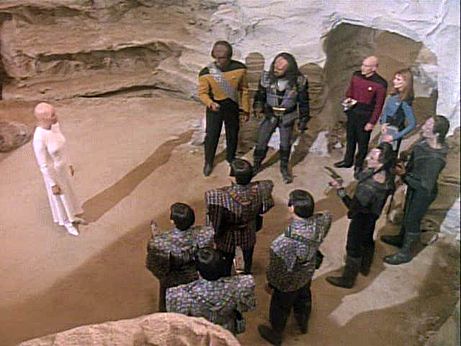 Season 6, Episode 20: “The Chase.” No yellow or red alerts in this episode, just a setup for people to complain about the movie “Prometheus” almost 20 years later.

As you can see, there’s not much of a correlation between higher alert status within an episode and higher ratings, either by season or as a whole. Not that you’d expect there to be. Can you imagine what the show would have been like if the writers got it in their mind that heightened alert statuses led to higher ratings? The Enterprise would have gone to red alert in practically every episode, which would have left little time for priceless holodeck antics. 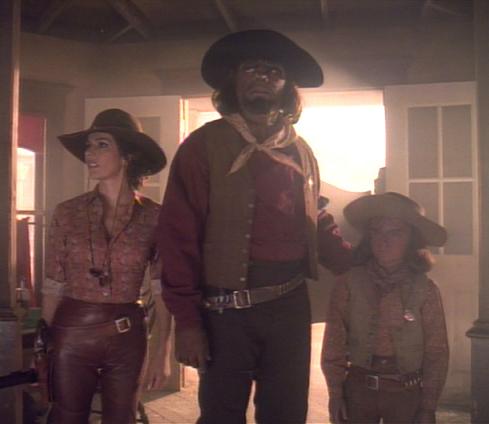 Season 6, Episode 8: “A Fistfull of Datas.” I didn’t mean to keep picking on Season 6, it just happened, I promise!

Special thanks to Belinkie for inspiring this article.

*Transcripts were obtained from tvsubtitles.net. Some major caveats in terms of this analysis: this is all based on whether or not the phrase “yellow alert” or “red alert” appeared in an episode or not. So a ship other than the Enterprise could have gone to red alert, and that would have counted as a red alert in this dataset. Also, I was missing the transcript for Season 4, Episode 3. Memory Alpha says that the Enterprise went to “blue alert,” but without having seen the episode, I’m not sure if the phrase “blue alert” is actually spoken or if the Enterprise’s interior lights are just blinking blue.

** Nielsen ratings were obtained from this website, which was missing ratings for several episodes; hence, the gaps in the chart.

19 Comments on “Stats Alert! Frequency of Yellow and Red Alerts in Star Trek: The Next Generation”