After four years of covering New York Comic-Con, I can safely say that this just doesn’t get old. Each year, I discover new insights into the intense fandom that drives Comic-Con and the multitude of ways of expressing that fandom. Here are a few of the highlights.

Harry Potter and the Devoted Hordes

If I had to single out a single pop culture property as having the largest and most intense fan representation, I’d have to choose Harry Potter, hands down. I present to you three pieces of evidence to back this assertion up:

1) Quiddich. The Harry Potter fanbase is not only large enough to turn out in large numbers to Comic-Con, it’s also large and devoted enough to organize multiple quiddich teams. AND it’s a popular enough event that it takes up a huge portion of square footage at a very crowded convention: 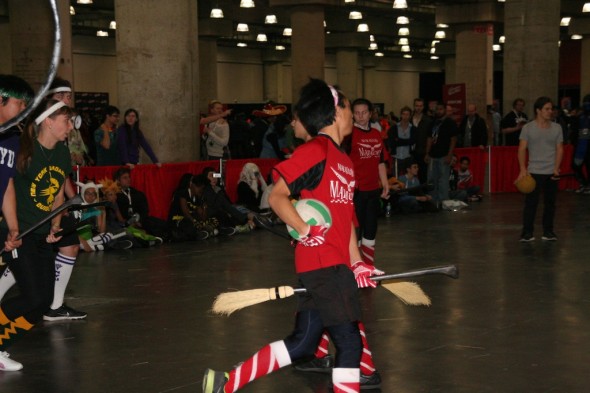 2) Wand-dueling. Say what you will about the merits of quiddich and running around with a broom in between your legs, but at least it makes intuitive sense as a way of taking an activity from a work of fiction and bringing it to reality. Wand-dueling, on the other hand, is less intuitive of a translation, and, as such, an even more telling sign of the intensity of Harry Potter fandom: 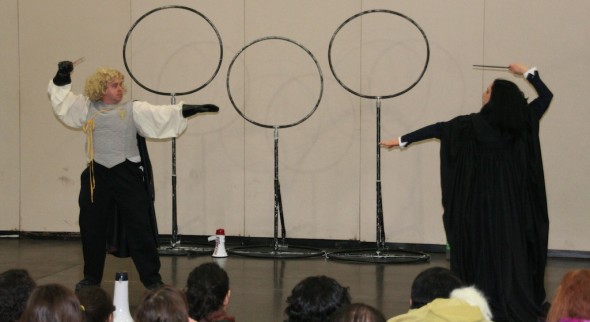 Turns out it’s basically instructions on how to choreograph wand duels. And it drew a big crowd, most of whom brought their own wands:

What struck me about this is that it’s basically the new lightsaber dueling, but involves much more imagination and suspension of disbelief. It’s much more of a pure, child-like form of play than many other activities that you see at Comic-Con, including cosplay.

3) The Tom Felton Autograph Line. I unfortunately don’t have photographic proof, but trust me on this: the line to get an autograph from Tom Felton, the actor who played Draco Malfoy in the Harry Potter movies, was orders of magnitude longer than any of the other autograph lines. Tom Felton was a bigger draw than numerous other A-list actors, including Christopher Lloyd, Carrie Fischer, Ian McDiarmid, and Sean Astin.

Seeing all this wasn’t necessarily a surprise, given the intense popularity of the books and movies. But it was interesting to see this on display at Comic-Con, as it is highly illustrative of the big-tent nature of Comic-Con. I often find myself explaining this to people who have never been to a Comic-Con: it’s not just a place to buy Marvel/DC comics and dress up as superheroes; it’s a place to celebrate fandom in a number of pop culture genres: sci-fi, fantasy, anime, video games, or anything else that inspires, well, fandom.

Fandom: this hard-to-define word that I keep falling back to when describing what Comic-Con is about. I could probably write thousands of words on the topic, but when it comes to Comic-Con, which is a garden of visual delights, I’m better off paraphrasing Supreme Court Justice Potter Stewart: “you know it when you see it.”

The Greatest Mr. T Cosplay Of All Time

If he cosplayed as Mr. T, with the requisite haircut, dayenu.

If he cosplayed as Mr. T with golden skull shoulderpads, dayenu. 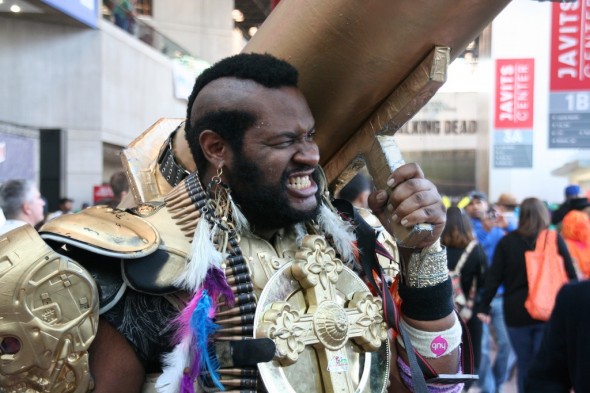 If he cosplayed as Mr. T with golden skull shoulderpads and an enormous golden bazooka, dayenu. 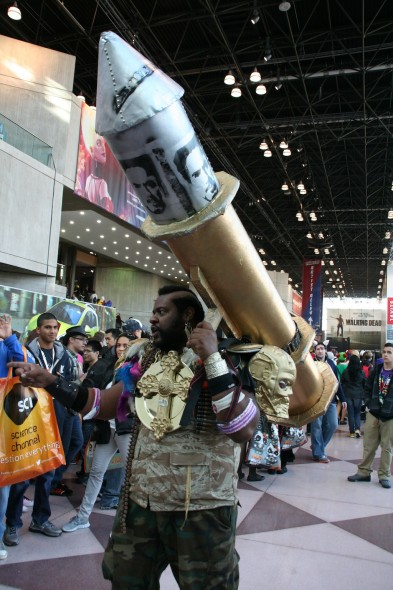 Dayenu. And yet, this guy tops it all off by staying in character, pitying fools and fearing planes for anyone who wanted to join in on the fun.

I take back what I said earlier about not trying to define “fandom” by words. I’ll give it a shot: “Fandom” is about expressing appreciation for works of fiction by taking the imagination that they inspire and using it to transcend everyday, normal life. In a moment of pure transcendence, the line between fantasy and reality is obliterated for everyone who wants it to be obliterated.

This was one such moment, and I pity the fool who was not able to take part in it.

Speaking of transcendence, let’s talk for a moment about transcending gender roles via cosplay:

In case you can’t tell, this is a man dressed as a female Captain America in the “Lolita” style. S/he brought down the house at the costume contest. 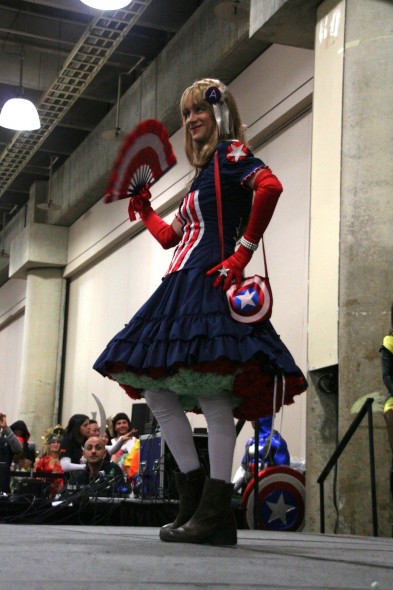 And in case you can’t tell, this is Wonder WoBear, a man dressed as Wonder Woman through the lens of the “bear” gay subculture. S/he, too, brought the house down at the costume contest. 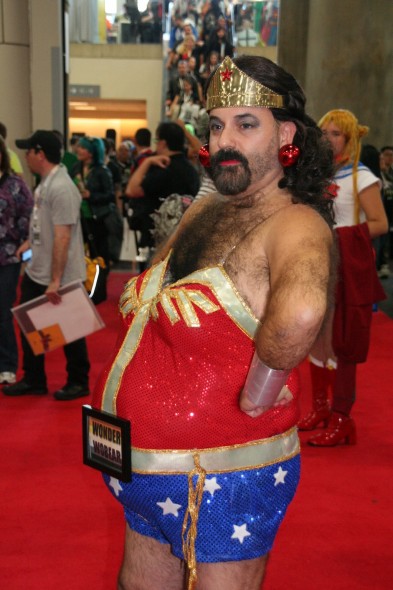 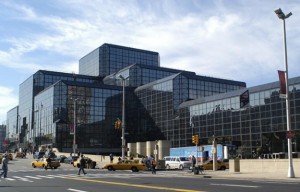 Let’s go back to this idea of transcendence and fandom: these truest expressions of fandom, those that transcend the boundaries of every day life and the hegemonic mainstream, can only really happen in a “safe space,” a context that’s free from judgment, scorn, and rigidity. Comic-Con is, by and large, that sort of “safe space.” It takes place in the Javitz Convention Center, a biosphere-like glass structure that sits at the far, far west side of Manhattan, separated from the glitz of Times Square and the luxury of Fifth Avenue by the West Side Highway.

In past years, I’ve taken issue with this idea that “What happens at Comic-Con stays at Comic-Con,” a slogan that was emblazoned on banners throughout the convention center, partly because it’s not true (what happens at Comic-Con gets posted all over the internet), but more because I didn’t like this idea of having to apologize for or hide one’s fandom. But this year, when thinking about Wonder Wobear and Lolita Captain America, I more appreciate the sentiment that Comic-Con is separate and apart from everyday life, and that this separation can be a good and empowering thing.

And besides, if I saw wand duels, Mr. T with a Golden Bazooka, and Wonder Wobear every day, they’d stop being special. They’d lose that magical, transcendent power that makes Comic-Con such a joy.