In the Spring of 1999, I purchased a Qui-Gon lightsaber and a Darth Maul lightsaber, and my college roommate and I meticulously learned every move in the Episode I “Prime of the Jedi” production diary. We stood there on the quad hacking away with those things until the Darth Maul lightsaber broke, and then I wrote a letter to Hasbro, and they actually REPLACED the damn thing.

What’s I’m saying was, there was a time when I was a Fan, and I didn’t care who knew it.

I don’t know what I’m a fan of now. Even when I get excited for a movie, I don’t feel like waiting in line on opening day. There’s not a single TV show I bother to watch the night it airs. The last Xbox game I bought was Modern Warfare 3, almost a year ago. I may like geeky things, but I find it harder and harder to geek out. I think about how much I was looking forward to Return of the King and compare it to how much I’m looking forward to The Hobbit, and I feel like something has been lost. 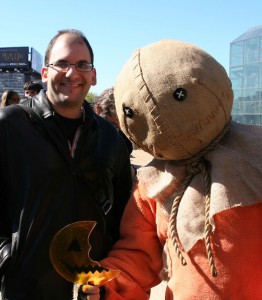 And so I was ashamed to be seen at Comic Con Saturday morning. I was not ashamed to be surrounded by nerds, but rather to be surrounded by nerds while wearing a boring striped button down shirt. Even before I got in the building, I ran into someone dressed as Sam, the creepy ghost-kid from the direct-to-DVD Trick ‘r Treat. I was jealous that he had thought of such a cool-looking but inside-baseball costume, that he had taken the time and care to make it… and that he was confident enough to wear it on the C train. I was embarrassed to wear a costume like that, and also embarrassed to be embarrassed to wear a costume like that.

Comic Con is a place for people deeply in love with pop culture, and they are not shy about expressing that love. There were costumes, panels, merchandise, long lines to meet Draco Malfoy, and a big room for people to play tabletop games. And although all these things interested me, I started my Comic Con experience with a distinct feeling of being a spectator, not a participant. On the X-Files, Fox Mulder had a sign in his office: “I Want To Believe.” That was me at Comic Con. I wanted to feel some of that blazing love that the people with the 4-Day badges draped over their Harley Quinn costumes clearly felt, but I wasn’t sure I had it in me (certainly, I’d have trouble filling out that particular costume). I was like a lapsed Catholic at Christmas mass.

This feeling of mild disengagement stuck with me for a while. I didn’t feel like standing in line for 30 minutes to try WiiU for 30 seconds. I wasn’t inspired to pay $20 to sit in a Delorean with a Michael J. Fox impersonator. I passed by massive walls of t-shirts with every possible Star Wars sight gag and endless rows of guys hawking their indie graphic novels. The show floor was definitely an interesting place to be, but I felt like I could easily walk away without buying anything and feel fine about it.

Then I took a look at Artists Alley. This is a massive room off to the side of the main floor, where the artists themselves were selling prints, taking custom commissions, and signing autographs. I expected this to be the least interesting part of the show for me, since I don’t really consider myself a comic book fan. Sure, I have a shelf with Watchmen, Dark Knight Returns, Sandman, Sin City, and some Chris Ware, but I’m not a regular reader.

Then I wandered over to a booth covered with cardboard boxes packed full of 11×17 sheets of heavy cardstock. Each sheet appeared to be an actual piece of art that went into a comic book. At the top of each piece was the Marvel logo and a production code. Within the pre-printed black rectangle, the artist had drawn the panels with a ruler and then sketched in the characters themselves, every ab and pec lovingly delineated. Over this, an inker had covered the pale pencil scratches with bold black lines. In the solid dark areas, you could see the overlapping thick strokes of a sharpie. I assume that at this stage, the Marvel people would have scanned it for somebody to color digitally and add the word bubbles. What I was holding seemed raw, laden with energy and love but without the rough edges sanded off. It seemed organic; it seemed like art.

Touching those hand-drawn pages, I had a Proustian vision of what it was like to hide under the covers at summer camp after lights out, hoping the flashlight batteries lasted long enough to learn what Wolverine was up to. Here I was, holding the actual art from an issue of X-Men. It was like holding a page of the Animal House screenplay with the smears from Harold Ramis’ typewriter on it. If this wasn’t a real piece of pop culture history, what was? Never mind that there were so many of these sheets lying around Marvel headquarters that they were packing them into boxes to sell at Comic Con; it felt special to me in a way I hadn’t expected. 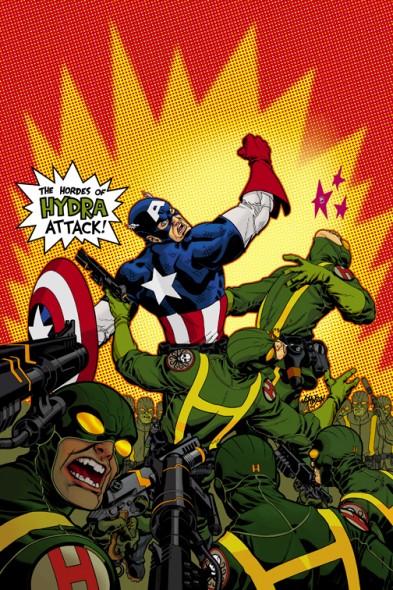 I own this now.

Another 20 feet down artist’s alley, I stopped at the booth of a guy named Dave Johnson to admire a print of Captain America pummeling a group of Hydra soldiers against a bright pointillist Lichtenstein-esque background. I was hesitant to interrupt the guy at the table because he was in the middle of sketching a pretty awesome Superman. Except as I watched him, he began to add a hammer and sickle on the chest in place of the iconic S.

I felt dusty synapses come to life somewhere. “Hey,” I said uncertainly, “is that Red Son?”

I watched him for another 30 seconds, and then something dawned on me. “Wait,” I said, “you drew that comic book?”

I then proceeded to turn to my wife and babble the whole plot of Red Son, an alternate universe tale in which baby Kal-El’s spaceship lands not in Kansas, but in Soviet-era Ukraine, while Johnson smiled patiently at me. Then I gave him $20 for the Captain America print and he signed it for free. It was pretty much the best $20 I’ve ever spent. 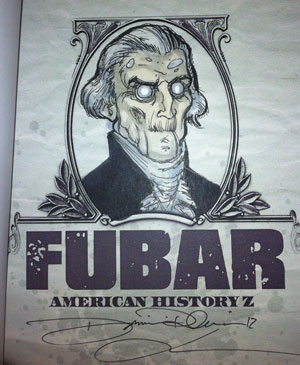 After that, I was officially in Fan mode. I had a long conversation with somebody about how they made such realistic ripples in the American flag Superman is holding. I talked to the guy who draws Garbage Pail Kids about where he got his ideas. I signed a mailing list for somebody’s amazing Batman sculpture I can almost certainly not afford. I bought a graphic novel that somehow works zombies into great moments in American history. The author offered to draw a zombie version of whatever historical figure I wanted on the front page. I chose Thomas Jefferson, and he absolutely KILLED it (no pun intended).

If you have ever loved superheroes, walking around Artists Alley will bring that back hardcore. The art was amazing, and seeing Spider-man getting drawn by a guy who gets paid to draw Spider-man is pretty much worth the price of admission. Everyone was simply crazy-talented, and there were no bigger fans there than the people behind the tables. You get the feeling that if someone told these guys tomorrow that they would never get paid for drawing the Hulk again, they would still keep drawing the Hulk, because that’s what they’ve been doing since they were three.

I left Comic Con feeling relieved that I was still capable of geeking out. Comic books did not seem boring or embarrassing; they seemed like an old friend I had to make time for. I think that as we get older, it’s surprisingly easy to drift away from the things we love. We get busy and we put them aside, and then when we have free time we don’t even remember what used to bring us joy when we were younger. We forget how to have fun. I’m going to get an envelope and write “OPEN IN CASE OF BOREDOM,” and inside I’ll put a piece of paper that says “See if Batman is any good this month.” Sometimes, it’s just that simple.