Hogwart’s School of Wizardry and Witchcraft is all about teaching young magicians the laws of magic – say this spell, and you get that result.  Magic may allow you to defy the normal rules of life, but you can never escape all rules. In any fiction involving magic, there are always laws or rules that constrain what you can do with magic – Aladdin can’t wish for more wishes and we are told that even Albus Dumbledore can’t conjure up gold from nothing. Without rules, the conflict is too easily solved and the story is boring.

Because it’s so bound up in these rules, the treatment of magic in fiction can be compared to how we deal with the more mundane laws of black letters on white pages. Magicians and lawyers are similar in that they rely on nothing more than their ability to turn words into power. They toil over long lost tomes and puzzle over the meaning of baffling arcana to find that one turn of phrase or trick of logic that allows them to accomplish their goal. This transformation of language into power is scary and frequently seems craven or backhanded. It creates hatred and distrust among the general population for both the Wizard and the lawyer – until you need an incantation or a contract written. Magicians, like lawyers, are both the cause of and solution to all of our hero’s problems.

The first party to the second party owes the third party…I don’t understand ANY of this.

When we hear about the downfall of King Midas, it’s easy to imagine some lawyer behind the scenes, figuring out how to construe the wish “Everything I touch turns to gold” in the most evil way possible. Fiction is full of stories in which the rules of magic come back to bite someone, a single errant word bringing their entire plan to ruins. We hear those stories and are reminded of the “2 Million Dollar Comma”  and our friend who lost his house because of an obscure clause in his mortgage contract. Words are slippery, tricky things, and magicians and lawyers both rely on mastery of them for power.

Our own everyday laws are based on a kind of magic. In the United States, when you’re being interrogated by a police officer, the phrase “I want a lawyer” has roughly the same effect as a magical spell. A particularly powerful incantation, those four words alone will both ward off the government employees threatening you with the death penalty and conjure up a different government employee that will do everything in their power to get you off scot-free. If the spell doesn’t work right away and the police ignore you, it induces amnesia at trial, making the court “forget” everything you said after invoking the right to an attorney.

Law is full of “magical” words and actions. Instead of waving a wand to seal a bargain, we sign our names, but if has the same “magical” effect of turning words on paper into a binding agreement. We don’t have “Avada Kavadra,” but a Judge saying “I hereby sentence you to death” has the same practical (albeit delayed) effect. Put the right people in the right room and have them all say “Aye” and a bunch of symbols on the page become binding law.

The “magic” of law is perhaps most apparent in the fiat money system.  Money is valuable because the law says so. A dollar bill is valuable only because it was minted in a particular place and the right person waved a Federal Reserve Wand over it and said “this is money now.” Imagine that you know how to make a 100% perfect replica of a $100 bill. While you might be able to get away with spending that money, the law is very clear that the object you’ve just created is not worth $100. Even though it’s physically identical to a “real” bill, the fact that no one waved the government’s Legal Tender Wand over your bill makes it a counterfeit, regardless of physical properties. 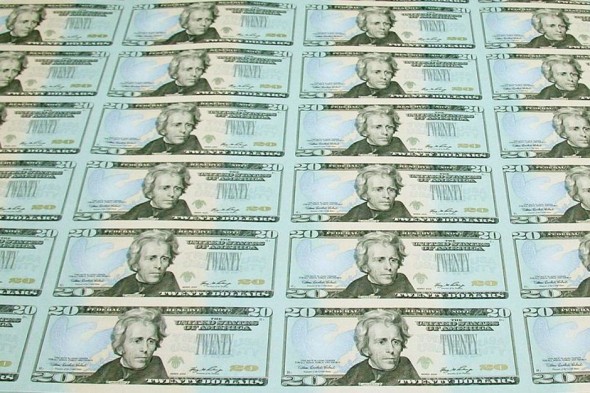 It’s not surprising, then, that in fictional universes that make use of magic, magic often serves as a direct substitute for law. King Arthur’s kingdom didn’t have complex election rules or billion dollar elections – a magic sword just picks the right person. In Harry Potter, the marriage of Fleur Delcour and Bill Weaseley isn’t sealed with a state certificate and the signature of witnesses  – they use a magical spell. Nowhere is the Magic-Law substitution more apparent than in the magical bargain – from Faust and Rumplestiltskin to Harry Potter and Pirates of the Caribbean’s Davey Jones, magical agreements drive the plot to many magical tales. Perhaps because it is the type of law that most of us encounter in our day-to-day lives, the magical-agreement-gone-wrong is one of the most common tropes in stories involving magic.

When you sign a contract, the only thing that changes is the threat of legal sanction for non-compliance – if the other side changes its mind, a piece of paper with a signature has no special powers over them. If you want to get compliance, you have to sue them and convince a judge that they broke the agreement, who will then order them to follow it, with various civil and criminal penalties attached. With magic, you can cut out the middle man and literally force the other side to comply with the agreement. The magical contract is typically portrayed as sacrosanct – in the Little Mermaid, Ursula’s contract with Ariel is so binding that even King Triton is powerless to undo it. In Harry Potter, House Elves aren’t bound to their masters with something as flimsy as a piece of paper and the threat of legal sanctions, or even as fickle as the threat of violence – House Elves are literally unable to resist their master’s commands, in the same way that they are unable to resist gravity.

Throughout the Wizarding World, magic is used as a substitute for traditional contracts and enforcement of agreements. When Hermione is worried about the other students telling Dolores Umbridge about Dumbledore’s Army, she doesn’t pull out Non-Disclosure Agreements and threaten to sue the other students if they don’t comply – she just hexes the parchment and the punishment for breaking the rules follows automatically. When Narcissa Malfoy wants to be sure that Snape is going to help her son, she doesn’t pull out a contract – she makes him take an Unbreakable Vow. 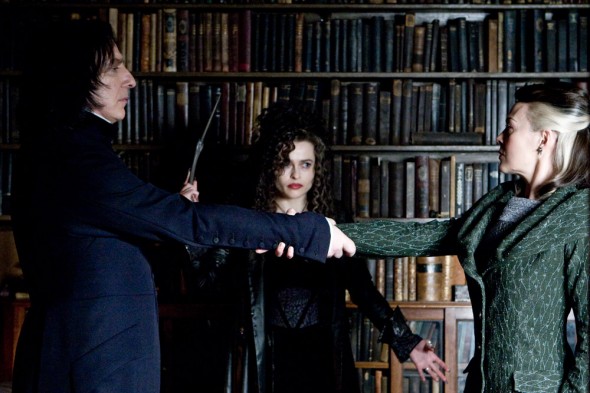 Guys, seriously, this would all be a lot easier if we just talked to my cousin, he’s a partner at DLA Piper.

The problem with magic substituting for law is that it’s not a very good substitute. Consider the magical will of Sirius Black. Just by reading it, the Order of the Phoenix can’t figure out what it means or whether they actually have ownership of their headquarters. Dumbledore has to conduct an experiment to determine if it’s binding or not.

Hermione’s “Dumbledore’s Army” contract doesn’t work because the people signing it don’t know what the consequences of breaking it will be. A Non-Disclosure Agreement would probably have been more effective, because such an agreement would have to spell out exactly what the consequences of breaking it will be. Lucius Malfoy is essentially tricked into losing control over the Dobby the House Elf when he hands him a dirty sock. While we cheer the result because of the parties involves, that’s not how normal labor relations do or should work – if you want to get out of a contract at your job, you can’t just trick your boss into signing a letter releasing you. Even if you did, no court would enforce it. In the Wizarding world, however, the laws of magic are also the laws – Malfoy has no contract to enforce with Dobby because up until that minute, he didn’t need one.

Magical laws are simply too inflexible for the replacement of textual laws construed by reasonable adults. In Goblet of Fire, Harry Potter is forced to compete in the Triwizard Tournament because the “rules” of the Tournament could be changed without the knowledge or consent of anyone running the Tournament– Barty Crouch., Jr. changed the rules by casting a spell on the Cup. Because the rules were fixed by a magical cup and not just a list of rules, there was nothing that could be done and Harry was forced to compete. Imagine if the Super Bowl decided that this year the offense could use 13 players instead of 11 because someone at the printer’s office fat-fingered the latest edition of the Rulebook. Magic gives you powerful tools to accomplish the goals of law, but it’s too inflexible and unforgiving to be a permanent substitute

Even worse, the substitution of magic for law also means an erosion of faith in black letter law. To someone who works with real magic every day, the magic of the law is mundane and unconvincing. How could you possibly explain to a Wizard that your $100 bill is real, and the pile of copies he conjured with his wand are worthless? Reliance on magical law necessarily decreases faith in – and hence the power of – the rule of law.

This has disastrous results for the magical world. The judicial system of the Wizarding World is a mess. At nearly every turn, rights are trampled, impromptu trials are held and innocent people are sent to Azkhaban. Voldemort is able to upend essentially the entire civil society in just a few weeks because the power of the Ministry of Magic doesn’t come from the collective will of the people, it comes from a bunch of guys with wands. This doesn’t start with He Who Must Not Be Named – in Order of the Phoenix, Fudge is ready to imprison Harry and then Dumbledore on the thinnest of pretexts, and is thwarted only by the sheer badassery of Albus Dumbledore.

The Wizarding World is still stuck on a gold standard of money in the 20th Century. One can only imagine the Weaseley’s would have a much easier time getting out of poverty if it weren’t for a massive liquidity problem. Harry is portrayed as being vastly wealthy and all of his gold is literally sitting in a vault. For the first 15 or so years of his life, it sat untouched, earning zero percent interest. The magical protections of the vault at Gringott’s keep the gold safe, but not nearly as safe as your money is sitting in a bank with Depositor’s Insurance – and you at least get a couple percentage points of interest while it’s there. 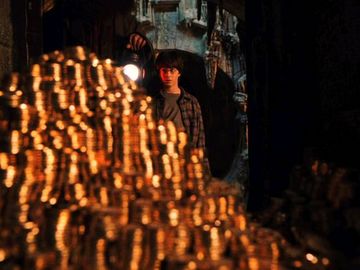 Magical people spend their entire lives learning the rules of magic – at the expense of nearly every other pursuit. There are seemingly no novels in the Wizarding World, no English or rhetoric classes at Hogwart’s School of Wizardry and Witchcraft. The only words with any power in the magical world are the tiny subset that happen to have magical properties. Words that can persuade or words that move the soul get no attention. A Wizard would look at the Declaration of Independence at the National Archives and wonder what magical properties the paper is supposed to have, or what spell we were trying to cast with “We hold these truths to be self-evident.” No spell ever freed more slaves than the Emancipation Proclamation or moved more people to tears than Romeo and Juliet. Words should have power because we give them power, day by day and person to person.

30 Comments on “The Magic of the Law”