In the 2008 thriller Taken, Liam Neeson plays Bryan Mills, a retired CIA operative. He has spent decades overseas, serving his country, but missing out on his daughter’s life and his own marriage. He tries, ineffectually, to worm his way back into his daughter’s life now that her mother has remarried. But when human traffickers kidnap her in Paris, Mills flies to France, tracks down the baddies, murders them ruthlessly, and rescues his daughter. The movie ends with the family being tearfully reunited in Los Angeles and with Mills giving his daughter a thoughtful gift: private singing lessons with a pop star.

If the plot sounds familiar, it’s because it is. Change the daughter to a wife and you have Die Hard. Change Paris to Pittsburgh and you have Sudden Death. For years, the thriller genre has taken advantage of working male anxiety about the balance between parental responsibilities and employee responsibilities by casting the absent father as a hero. Sure, he wasn’t there to take his kids to ballgames or piano recitals. But he was there when terrorists took over a place. He saved his family’s lives, along with the lives of hundreds of strangers. He had a rich life outside of his household, and his family couldn’t appreciate that until danger made it plain.

I was reminded of this when watching the trailer for Taken 2, screened before a showing of Looper. On paper, they seem like an obvious match: mid-budget action thrillers made by small studios. But two disparate details struck me later. 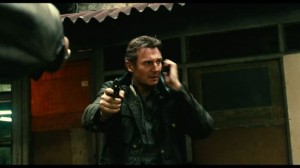 First, Taken 2 grapples with an issue rarely picked up by action thrillers: the cycle of violence and revenge. Rade Šerbedžija, the industry’s go-to Slav, plays the father of one of the men Bryan Mills killed in Taken (and not even a particularly important victim; a henchman who provided one useful lead and was then electrocuted with alternating current). He swears revenge on Mills for killing his son, then arranges to have him and his family kidnapped in Istanbul. He confronts Mills with his transgressions, only for Mills to respond with a scowl. “Your son kidnapped my daughter,” he says.

We don’t see what happens next in the trailer, but I’ll take a stab at it. I presume Šerbedžija’s character doesn’t say, “Okay, I guess we’re even,” and let Mills go. I presume Mills doesn’t acknowledge that the cycle of violence brought him to this place and accept his capture and eventual execution with good grace. What probably happens is that Mills escapes and uses his “particular set of skills” to kill the brothers, cousins and fathers who came to Istanbul to kill him. If these men have brothers, cousins, or fathers of their own, maybe they’ll show up for Taken 3. Or, if Taken 2 goes the Seventies route and has Mills die in the end, maybe Maggie Grace will suit up and go kill some Albanians in the sequel. “You killed my father,” she’ll yell, and Karl Urban will yell, “Your father killed my brother!”, and gunfire will resolve the accounting.

Action thrillers rarely grapple with the cycle of violence because it’s too reminiscent of real life. We go to the movies for many reasons, but escape is common among them. And the cycle of violence that we recognize in the news – in Eastern Europe, in the Middle East, even in North America – is too depressing to confront head-on. Any attempts to package it in a narrative form, pitching a decades-long war as the fault of one side alone, fail under critical scrutiny. But a movie gives us the luxury of a stopping point. The hero is the one left standing when the credits roll. It doesn’t matter if our hero uses the same methods as the villains: gunfire, knifeplay, maiming and torture, in the case of Bryan Mills. He’s doing it for his family. The cycle of violence ends when he’s finished.

(Absent from all this is the consideration that perhaps the more heroic choice would have been to give up the overseas CIA job and accept a more boring, lower-paying job in the States in order to be with one’s family. But that’s a subject for another post) 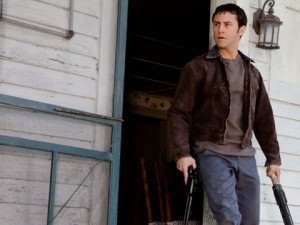 Looper, of course, features some very obvious cycles of violence central to its plot (as we discussed on the podcast). A looper’s last assignment is always to shoot himself in the head: his future self, sent back in time to keep illegal time travel a secret. Their ceaseless, anonymous violence claims them in the end. We see Joe’s fellow loopers celebrating this in various montages. While there’s something to be said for the blissful certainty that nothing you do in the next thirty years will kill you, most of us would be more inclined to fear someone who gleefully embraces their self-destruction. Picture Tony Montana at the end of Scarface, taunting the assassins into riddling his body with bullets that he’s too coked up to feel.

But the key cycle, the one that’s only fully explored at the end, is the cycle surrounding the Rainmaker.

The Rainmaker is a man without a past. In a century where “tagging” has become so ubiquitous that corpses have to be sent thirty years into the past to be disposed of, he’s someone without an identity. All that’s hinted at is that he has a synthetic jaw and that he’s taken over five international crime syndicates singlehandedly. We learn, shorty before Joe does, how such a thing might be possible: the Rainmaker is an immensely powerful telekinetic with some unrealized rage issues.

In Looper, there is presumably a primary timeline, where Joe kills his old self, gets paid and lives another thirty years. In this timeline (T1), the old Joe that’s sent back doesn’t survive. Joe kills his old self, moves to Shanghai, and falls in love. The Rainmaker exists in this timeline (we see his name in a scrolling banner on the news). Old Joe overpowers his captors, ducks into the time machine of his own volition, and disarms Young Joe by flinging a gold bar at him. He then sets off to find and kill the pre-adolescent Rainmaker.

It is Joe’s act of hunting down the young Rainmaker that turns him into the Rainmaker: the boy is wounded by an errant shot to the jaw and his mother is killed. Presumably, the young Rainmaker flees to the city, loses his jaw to infection, and swears vengeance against all loopers, a vengeance that he fully realizes thirty years later once he’s taken over all the time travel syndicates. This is the second timeline (T2), in which a time traveler inflicts a different destiny on the present he came from. 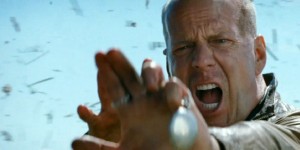 Both Young Joe and Old Joe think that violence can solve all their problems. Young Joe thinks of violence as a steady paycheck and a lucrative retirement. Old Joe thinks that violence will stop a monster from coming to power. Both reach for it instinctively, like a crippled man does for a crutch. When Young Joe offers Old Joe a way to save his wife without having to murder any children – tell him who his future wife will be, so Young Joe can fall in love with somebody different – Old Joe won’t hear it. Is it because he wants to have his cake and eat it too, and he thinks that violence will let him achieve that? Or is it because he’s so used to violence he can’t trust any other solution?

In Looper‘s climax, Young Joe realizes this. He sees that every act of murder creates not only a corpse but a wronged party: a widow, an orphan, a mourner. Young Joe, an orphan himself, is a product of such violence, and of course he reached out to violence – Abe putting a gun in his hand – as a solution. He passed that lesson on to Cid, while hiding beneath a trapdoor waiting for the gat-man to leave the farmhouse.

So what is the answer? The only answer is to remove oneself from the equation entirely. Not just disarm, but accept loss. Stop thinking of death, justice, and vengeance as things that a person can deserve, or things that a person can earn through violence. Young Joe learns this, at the point of a blunderbuss, and not only rights the death that should have happened thirty years in the future, but improves the world by preventing a Rainmaker from coming to power. 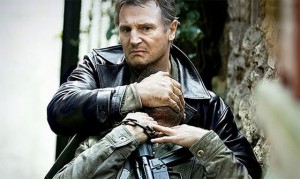 If you want to understand just how subversive a message that is, apply it to Taken. Bryan Mills learns that his daughter is kidnapped and about to be sold into sex slavery. It would repulse us to suggest that he do nothing, especially when the first act of the movie makes clear that he’s very capable of doing something. But his act of “doing something” generates more widows, orphans, and mourners, all of whom operate on the same principle he does and come hunting for him in Taken 2. In the course of saving his daughter, he may have doomed himself – and, depending on Šerbedžija’s thirst for vengeance, his daughter may still be in trouble. The net effect of his violence is not just zero, it’s likely negative.

Yes, of course, the Albanians are evil and Bryan Mills is good, so it’s wrong that they take vengeance and right that he does. But the desire for vengeance is an emotional urge, and while we may deny our villains access to the narrative desserts that our heroes get, we never deny them the same set of emotional responses. Villains feel joy, sadness, and anger, the same as our heroes do.

(Also, the good/evil dichotomy slips a little when Mills tortures a man through electrocution, then maims an innocent woman to compel an answer from her husband)

The idea that violence can be a force for good is such a dominant discourse that it takes a bizarre narrative to not only examine it but stake a real challenge against it. It takes a time travel story so complex that it might not even be diagrammable (where did the first old Joe, the one Young Joe kills, come from?). It takes an action thriller that literally pits a man against himself, racing against the clock to shoot himself in the head, only to realize he has to shoot himself in the chest.

But that is one of the chief virtues of science fiction, as we mentioned on the podcast: its ability to turn metaphorical tropes into literal phenomena. We have a world where the existential question of survival in the face of inevitable death confronts us every day (The Road), or a planet that forces us to confront our subconscious fears (Solaris), or a battle with our future self over the right to use violence. The fact that we need such a fantastical concept to even address this challenge should suggest that there is no easy answer.

13 Comments on “Taken 2, Looper and the Cycle of Violence”