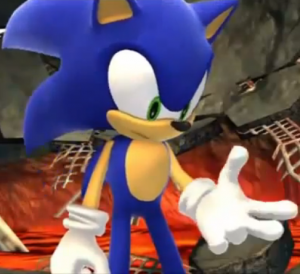 Even with Blast Processing, he has his pensive side.

Many critics, non-gamers and gamers alike, can argue that we visit the worlds within video games as a vicarious pleasure—a peek into a world simpler than ours, or one where we’re a hero with no real personal troubles, but all the power to stop the world’s most feared villain. But what makes a great game, like any great story, is a hero we can see a little of ourselves in, bringing us a cathartic release in addition to a little gratification. And despite being the same platforming goodness it always has been, Sonic Generations brought about that emotional release for me as a player. Sonic Generations was the game that made me realize that my favorite hero might be a little depressed, or at the very least suffering from an everyman’s self-esteem issues.

While it is difficult to adequately define low self-esteem, I’d like to begin by acknowledging some commonly recognized symptoms, so that we are all on the same page as to what I’m looking for and referring to within Sonic Generations. Someone with low self esteem, generally speaking, could be known for any and all of the following traits: perfectionism, excessive defensiveness in the face of criticism, neurotic guilt over past mistakes, or excessive will to please. Throughout this essay, I’ll note certain behaviors as one of these possibilities.

Perfectionism is an easy one to point out through the basic gameplay; while the game itself can be beaten in a few hours, the completion thereof requires multiple achievements that involve flawless runs of a level. Choosing the perfect path to get every red ring, or choosing the fastest path without dying to get every S rank—Sonic not only repeats the same levels that he’s safely beaten over and over again, but he goes back to them continuously until he’s mastered every corner. And it’s not like this is a frivolous action on his part—in the world of Generations, this is what brings his past color and life again. Whoever brought him here to this time traveling portal world wanted him to do that. And Sonic, for whatever reason, feels compelled to keep reliving his past. Perhaps the perfectionism guilted him into believing he could have done better, or perhaps he just wants to prove he’s still got the old skills.

Once Past Sonic and Present Sonic notice each other and figure out what’s going on—that they’re traveling through time and space to undo damage done by Dr. Robotnik’s Time Eater, Present Sonic pretty much dominates the show. Present Sonic orders Past Sonic around during strategic maneuvers, such as in the cut scene where they first take on the Time Eater (saying lines like “Keep moving!” as though they were an original thought and not completely obvious), or during cut scenes where they’re establishing how to undo the Time Eater’s damage to the timeline. It’s fitting that Past Sonic doesn’t have a voice; in his eagerness to please and impress peers, Present Sonic wants all the great ideas, all the witty lines, and all the attention. And it’s not like the writers can just imply Past Sonic is the silent protagonist trope of the 90s like other game heroes; right off the bat, it’s uncomfortably noticeable that Past Tails can still converse just fine, yet Past Sonic never gets a word in. 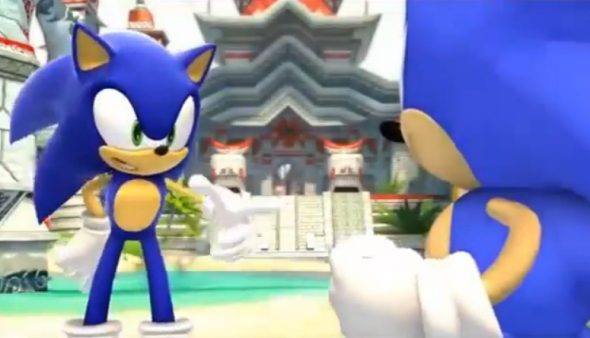 Present Sonic calls all the shots, with Past Sonic smiling and nodding.

As Past Sonic and Present Sonic travel through time and relive all of the times they have overcome Robotnik (“Seriously. We beat this guy every time. It’s like it’s our job or something,” quoth Present Sonic), one thing becomes lamp-shaded: Sonic acknowledges that he has defeated Robotnik countless times, but also tacitly admits he never actually killed him or incarcerated him, or done anything that could have reasonably stopped Robotnik from trying to rule the world once again. Each time, he just lets him go, with no concern about his animal friends who are enslaved. The “I win” was enough for Sonic. That’s when I was forced to consider: what if Sonic keeps Robotnik around as his ego boost? We all know the kind of friend we just have around to make ourselves feel better about our lives—someone less pretty, someone less successful, someone less intelligent—we’ve all done that.

Looking back on other Sonic games, the writers have implied that Sonic cares more about the challenge of the fight than the world he’s trying to save. When Shadow asks “Who are you?” right before their final battle in Sonic Adventure 2, he replies “Just a guy who loves adventure.” When Metal Sonic falls to Sonic in Sonic Heroes, he mocks Metal Sonic with “Anytime you want a rematch, just let me know. I’ll be waiting.” But much like Sonic’s interactions with Robotnik, Sonic never kills or incapacitates Metal Sonic, Shadow or the other recurring baddies. He keeps them around, allowing them to boost his ego with another win whenever necessary.

But it’s not just his interactions with villains that imply he isn’t exactly a selfless hero; the Chao Gardens of Sonic Adventure 2 recognize Sonic as a more neutral character. The Chao creatures have a way of responding to the caretakers, sometimes even taking the form of that character. With proper care, playing with Dark characters can produce a Shadow Chao, which takes after Shadow the Hedgehog in mannerisms and looks. But playing with exclusively Hero characters doesn’t analogously yield the Sonic Chao; to get the Sonic Chao, one needs a neutral Chao, exposed to both Hero characters and Dark characters.

Getting back to Generations, the ending is where they start to beat the player over the head with this self-esteem theory; the big climactic battle between Sonic and Robotnik was nothing more than a support group for Sonic. In spite of the fact that a dozen of Sonic’s super-powered-animal friends were also kidnapped, none of them seem to want revenge on Robotnik. Nor do any of the friends seem eager to jump in and save the Sonics when both are crushed by the Time Eater’s robotic arm. Rather, they sit on the sidelines and cheer him on, encouraging him to believe that he can save the world by himself. Even the Past Tails and Present Tails, the ones most likely to help their friend and also the ones who canonically have been proven able to transform in to the super form (Sonic the Hedgehog 2, Sonic the Hedgehog 3, Sonic Heroes), prefer to let Sonic handle it, simply saying “You can win, Sonic,” and “You always do.” 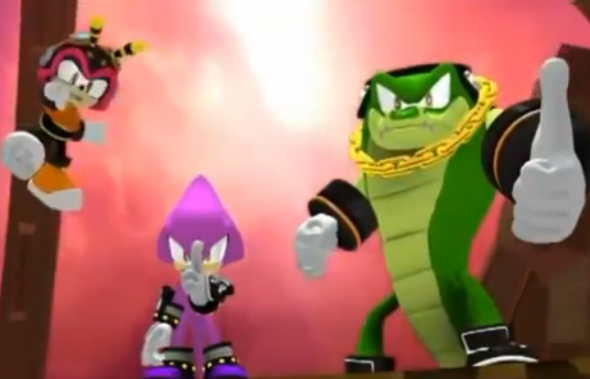 The ending for Generations is the same as the beginning: with a party for Sonic. The entire adventure becomes surreal as the player watches Sonic resume his birthday party as though nothing had happened, making the entire ordeal feel like nothing more than a party game designed to highlight the birthday boy. Evidence continues to point to the notion that the entire game was staged when nobody takes a moment to sigh in relief or contemplate their latest escape from peril; they go right back to the party, not even acknowledging that they were in any real danger. Not only that, but despite defeating the one person in control of the time travel, they all somehow manage to return to the party nearly effortlessly, implying they could have gotten back on their own. Tails makes a comment about how Sonic is impossible to surprise, so perhaps this was the element of the party they hoped would be a great surprise present for Sonic.

But to further establish this theory, we can’t just rely on Generations—so do games after Generations show any signs? Sonic the Hedgehog 4 Episode 2, despite being the next game to follow Sonic Generations, canonically takes place after Sonic the Hedgehog 3—which makes it the perfect game to check in on Sonic and see how things are going post-Generations. We can confirm that, despite this game being largely about Past Sonic, that the events of Sonic Generations have affected the past; Sonic goes into Sonic 4e2 with moves that only Present Sonic knows (but that Past Sonic proved after Generations that he learned early after watching Present Sonic), such as the speed boost and the homing attack. So how does Past Sonic respond to seeing this future version of himself?

For one thing, he interrupts his adventure in progress to call in his friend Tails for support; despite starting Episode 1 taking on Robotnik by himself, he brings Tails for the remainder of the adventure. Humbled by seeing his Present self’s ego complex, he admits he needs help, but more importantly friendship; virtually every boss in Sonic 4e2 requires the assistance of Tails, despite Past Sonic being able to shut down all previous foes from Sonic 4e1 single-handedly. Even in the Chaos Emerald levels, where Tails is almost entirely superfluous, Sonic still looks back to Tails each checkpoint—possibly to reassure Tails that he’s wanted and needed, or possibly to reassure himself that Tails is actually still there, right behind him.

Of course, many obvious points could undermine this theory, like the fact that Sonic generally seems pretty cheery the whole game. But much like many real-life friends, self esteem issues can be deep rooted and well hidden, so looking for hints is sometimes the closest one can get to the truth. And Sonic bears all the hints, such as perfectionism through replaying the same levels for greater challenges, or fear of criticism and eagerness to please through replaying levels he has already beaten and bosses he knows he can defeat. And after seeing how his future self would treat others, Past Sonic reacts by keeping his friends and support group close. This theory may not be solid gold ring truth, but one cannot deny the overwhelming possibility that Sonic is no more emotionally well off than any one of us. In a way, that almost makes him a better hero—in just one more way, he’s a relatable one. And if low self-esteem Sonic can still get it together long enough to save the day, so can we.

Chalkey Horenstein is out to prove that video games, as well as television and movies, can be just as literary as literature. As a journalist and editor, his work has also appeared in The Record (Detroit, MI), The Artful Dodge (Wooster, OH), The Westford Eagle (Westford, MA), Real Change (Seattle, WA), Die Jerusalёmmer (Germany), Day Old Stubble (the internet), and Spare Change News (Boston, MA). He graduated from The College of Wooster, and spends most of his writing time on his own pop culture blog, The Analytical Couch Potato. He is a simple man that enjoys simple things, like morning jogs and fresh out of the dryer pajamas.

One Comment on “Sonic Generations: Self-esteem of a Hedgehog Hero”