The Finnish mobile gaming juggernaut Rovio rocked automatic updaters (a while ago for some of you, depending on when you read this – mine is on Android, and I got it this week) with the Angry Birds 2.2.0 update, perhaps the most important update in the history of mobile gaming. For the first time in the history of mobile and tablet gaming’s trademark property, players will be able to directly purchase advantages in achieving three-star levels — a harrowing prospect, set against the backdrop of the ongoing London 2012 Olympics. For an update on the update, see below:

Of course, this isn’t the first time gamers have been able to throw money as well as time at our simulated problems. Microtransactions are the big trend in the gaming business, as companies learn to price additional downloadable content — weapons, abilities, levels, colors, yadda yadda — at a low enough point to keep gamers paying well after the initial game purchase.

As previously noted on the site, this seemingly seismic shift in the economics of gaming prompted Half Life, Portal and Steam originators Valve to hired an economist — University of Athens and University of Texas at Austin Professor Yanis Varoufakis — to study and blog on the new economies of online gaming. You can read his Arbitrage and Equilibrium in the Team Fortress 2 Economy on the Valve Economics website.

But Rovio’s move is important for a few big reasons:

What this says to me is that the microtransaction model is under pressure. And I call Angry Birds 2.2.0 the most important update in mobile gaming, because if it doesn’t work, and if Rovio runs into trouble, that could potentially change the trajectory of gaming as we know it.

And not just is the microtransaction model under pressure — but specifically the model where players pay for in-game advantages is under pressure. I don’t have the data to know certainly, but the biggest disappointments in additional revenue generation for these gaming companies seem to center on games where player pay to do better at the game. DLCs of additional content, new levels, etc., seem to be doing fine, despite people’s complaints about them — but games that sell weapons and special abilities (like, say, Draw Something and its bombs and colors, or the cheap attempt Zynga made to do the same with Words with Friends) — don’t seem to be sustaining enough interest to move the needle for companies any larger than the absolute basic start-ups.

And that’s part of the issue — social gaming and mobile gaming are no longer niches — they are big business, and thus, to continue, they must deliver big-business performance and actual growth. And they just don’t seem to be doing that in this specific area. 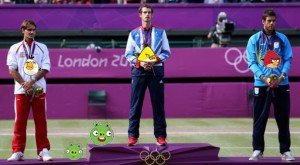 This seems to be especially pertinent happening during the Olympics, which, despite the drift toward nationalism, celebrity and other forms of worship, are still at least in an illusory way about fair play — about competition for the sake of struggle, not the sake of victory — where we still expect our athletes to compete on a level playing field, without performance enhancing drugs, blood doping, or other things they do when we’re not looking.

We are certainly all familiar with cheat codes and their popularity — where players can use special passwords, menus unlocked for meeting certain in-game goals, or button sequences to make their characters invincible or fly or have infinite ammo or have giant heads.

(And if you weren’t familiar, you are now).

We are all familiar with the Game Genie, or with the tricks played with emulators — or even with “tool-assisted play,” where players optimize a run through a video game using programs to slow down the program and make perfect controller inputs at the perfect times.

(And if you weren’t familiar, you are now)

But this feels like a diversion, and even if it has enduring appeal, does it have sufficient appeal to serve as the major revenue source for the gaming industry?

After all, in the spirit of the Olympic Creed — is not the most important thing in gaming not the triumph, but the struggle?

This does not appear to be the way current game design thinking is going — especially in the trend of the gamification of non-game products and services — such as receiving FourSquare badges for going to dinner. The goal in many cases appears to be the rationing of dopamine — the neutrotransmitter associated with reward — in such a way as to condition the user to form habits around the product. The debate around video game addiction is considerable in both academic and critical circles, and there is plenty of interesting reading out there about it.

But I’m not here to address whether video games are addictive or not — what I am noting is that gaming companies have tried switching from selling challenges and experiences to selling success itself, and that the jury is deliberating in the market right now (particularly with Angry Birds 2.2.0) to determine whether and to what degree this strategy will persist.

I would conjecture, in line with our general skepticism and discomfort with Olympic athletes who have “cheated,” that people are less comfortable with buying success at games — even games where nobody else is watching — than we might expect, even from psychological experiments.

In particular, even to the degree that people are comfortable with it, they might not be so fond of it to be willing to shell out more for it every fiscal quarter, sufficient to grow the revenue of a video game company in line with the expectations of the public equity markets — which are for many of the leaders of these companies the ultimate arbiters of success — or of Game Over.

But what do you think? Are you comfortable with paying for power-ups? Do you see it as a viable long-run revenue source for growing public game companies? Do you think Angry Birds will make mad bank with this new mobile offering? Did you get it on your iPad like three months ago and wonder why I’m only writing about it now? Let us know in the comments!