Avatar: The Last Airbender, Nick’s wushu cartoon smash success, was a story of pre-teens aimed at teenagers. Or maybe it was a story aimed at pre-teens coaching them on what to expect when they became teenagers. Either way, the lessons – about infatuation, about hard work, about losing one’s innocence – are lessons that benefit teenagers the most.

The follow-up, Legend of Korra, takes place seventy years later. It features an older protagonist – Korra, a bold and impulsive teenager – and is set in a bustling modern city. If TLA is a story of pre-teens aimed at teenagers, LOK is a story of teenagers aimed at adults. Or maybe it’s targeting teenagers, but it’s telling them what to expect in adulthood. Or maybe it’s meant for adults who have lost their way.

Living Up To Your Potential Is Scary 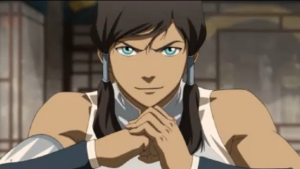 TLA begins with Aang avoiding his destiny as the Avatar. He froze himself beneath a glacier because he didn’t want to begin Avatar training and leave behind his childhood. S1 (and much of the later seasons) deals with Aang realizing that he can’t keep from becoming the Avatar – from growing up – while the world falls apart.

LOK has no such obstacles. We first meet Korra as a precocious four-year-old, flinging stone blocks and fireballs. “I’m the Avatar!” she yells. “You gotta deal with it!” She’s a clear contrast with Aang’s reluctance. She knows she’s the Avatar and she’s ready to claim the title.

Once she reaches Republic City, however, she learns that being the Avatar isn’t all it’s cracked up to be. It’s not enough to merely be an exceptional bender, if she causes as much damage as she prevents (like when apprehending a petty gang in E1). She has to be a representative to common people. She has to rely on official channels, such as the Council and the police, while also fighting corruption within those channels, such as Councilman Tarrlok and Chief Bei Fong’s replacement.

On top of all that, she has to deal with Amon. Amon is a uniquely terrifying villain, for reasons I’ll elaborate on below. He shows up without warning, always traveling with an armed and capable entourage. He’s an adversary of such power that only the Avatar can stand against him. Unfortunately, neither Korra nor anyone else know how to handle Amon.

Despite these challenges, the pressure does not let up on Korra. People keep asking things of her: Republic City’s yellow press, the Council, the common citizenry. She has to learn airbending, the elemental form to which she’s least suited – and lest you think Korra should just suck this up, recall that no one besides the Avatar ever has to learn a form to which they’re unsuited. Waterbenders are born waterbenders, and they’re discovered as waterbenders when they show an affinity for waterbending. It’s only the Avatar who has to train against type, and that’s in addition to learning how to talk to spirits, enter the Avatar state, and chi-bend. 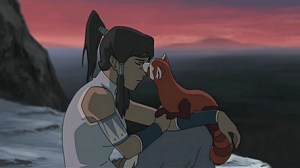 Korra discovers that having to live up to what people expect of you can be scary. It’s great to hear from adults and peers how amazing you are – how smart, how fit, how great at firebending. And being encouraged as a child is certainly healthier than being discouraged or belittled. But if you spend your whole childhood basking in the enthusiastic approval of authority figures, what happens when those authority figures turn to you for help? What happens when you have to deliver on a lifetime’s worth of expectations?

Korra’s desire to live up to what’s expected of the Avatar leads her to make some dangerous choices. She challenges Amon to a one-on-one duel. She joins a pro-bending league, putting her abilities to a public test. She confronts the most powerful member of the Council after he arrests her friends. This is more than would be expected of any bender – but it’s fully appropriate for the Avatar.

And Korra also gets scared. She never backs down from the challenges of her role as Avatar, but she grapples with a lot of private fears. Only her closest friends see the extent of her doubts. Korra deals with the challenge that all gifted children have to face – the world expects a lot of you. And if you’re not certain of what you’re supposed to do with your life – and no adolescent is certain – then that pressure to live up to the world’s expectations can either rush you into hasty decisions or overwhelm you with terror.

Dying Isn’t As Scary As Losing What Makes You Unique

The world of TLA is very pre-modern: steam power, written communications, swords and bows and boomerangs. People work very hard to subsist as farmers or laborers, with the world’s one mega-city, Ba Sing Se, being something of a novelty. They’re preoccupied with survival and freedom, as often happens in a world at war.

By contrast, the world of LOK is very modern: air and rail travel, wireless radio, shock gloves and mecha tanks. People are in less danger of dying or being sent to a labor camp. As happens during times of peace, attention turns inward. The great fear in peacetime is no longer dying or deprivation, but losing one’s humanity. 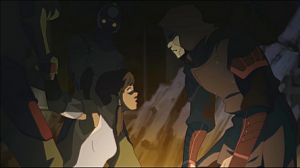 Into this bustling modern society comes the radical Amon. While Republic City is full of peace and optimism, there are enough disenfranchised people that Amon can find an audience. He speaks of upsetting the existing power structure through violent revolution, which is one of the harder sales to make. And he wields a unique and terrible power: the ability to take someone’s bending away.

As a narrative device, this is genius. It imparts the seriousness of an adult drama into a children’s cartoon. If Amon dragged benders onstage and executed them one at a time at gunpoint – a Republic City Che Guevara, if you will – it would never make it past Nick’s standards and practices department. Instead, he just undoes their bending. That’s all! See? They’re still alive. Perfectly safe for children.

Think about this a little longer, though, and you understand how terrible a fate this is. Benders get the power of bending through birth. They then spend years grinding that raw potential into a useful skill. Every bender enters into a social role that hinges on their bending talent. Nobody bends casually; nobody’s a radio correspondent who just happens to be an earthbender. If you can earthbend, then you probably work in construction, or architecture, or you compete as a pro-bender, or you shake down shopkeepers with a criminal triad.

Bending is your life. It’s a sixth sense you were born with, it’s a discipline you’ve spent decades honing, and it’s how you contribute to the social order. It’s how you identify to yourself and to others. And then, with very little fanfare, a masked stranger takes it away from you. All done.

We can’t be so callous as to say dying would be preferable to such a fate. But you can’t imagine the survivors of a bending removal are happy to be alive. 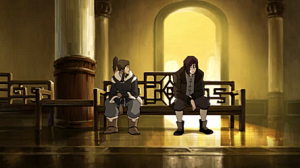 One of the great fears that modern adolescents share, as they enter adulthood, is the fear of losing some true part of themselves. This is why adolescents get so bitter and confrontational – they recognize the compromises and hypocrisies that adults have grown accustomed to, and they can’t stand it. Teenagers don’t want to compromise on their passions. They want to do what they want when they want it, and they can’t understand why anyone would want anything less.

(Teenagers also want to fit in with their peers, of course. The conflict between those two drives – fitting in and acting out – defines a lot of teenage drama)

The fear of losing one’s unique spark is a very adolescent fear. Adults tend to have either more prosaic fears – losing one’s job, losing one’s health, making an ass out of oneself at the Christmas party – or more profound ones, like what sort of legacy they’ll leave for their children. But they’re not as concerned with abandoning their inborn specialness. Maybe that’s because we’ve already lost that spark, but that’s a debate for another day.

5 Comments on “Legend of Korra: Well I Guess This Is Growing Up”