I know what you’re probably thinking: “Married With Children vs. Seinfeld? Are you crazy? How can you even compare that crass, repetitive, classless piece of crap to the groundbreaking, genre-revolutionizing, generation-defining masterpiece?” Trust me, I know this seems controversial. Have you ever had the experience of telling somebody that you hate Seinfeld? Ninety percent of the time, it’s akin to confiding in them that you’ve been abducted by aliens: people think that you’re crazy, or that you’re being intentionally belligerent.

But when you’re totally out of step with the cultural tastes of the people around you, you have to think about why. And I think I’ve figured it out: Seinfeld is structured like a comedy, but it isn’t one really. Both Seinfeld and Married With Children use comedy tropes to address serious existential issues, but only Married With Children is actually a comedy.

Put another way: Married With Children is The Myth of Sisyphus, and Seinfeld is No Exit.

Both MWC and Seinfeld are character-driven shows, and they both rely, to a degree that varies from episode to episode, on the fact that those characters are sociopaths (i.e., that they lack empathy). But whereas MWC is an existentialist deconstruction of family and gender roles, Seinfeld is a show, and explicitly so, about nothing.

MWC examines the essentialist model of gender by using stereotypes, and the characters’ roles are defined entirely by their economic and sexual success. The patriarch of the Bundy family, Al, is the subject of constant emasculation because he’s economically and sexually incompetent – much of the show’s comedy relies on his family and others berating him for being a shoe salesman who doesn’t make a lot of money, and being pathologically uninterested in sex with his wife, and unable to satisfy her when he is convinced or forced to try. Peggy, his wife, is portrayed as hypersexual but deprived, and her femininity is questioned and mocked because she’s lazy, doesn’t cook or clean or care for the welfare of her children. The Bundy daughter, Kelly, is also hypersexual but her character’s comedy comes from the “slut-shaming” aspect of mocking her promiscuity as well as her lack of intelligence. Bud, the son, is mocked for the precise opposite reason – his hopelessness when it comes to attracting women.

Then there are the neighbours: Marcy, a straw-feminist who has her femininity undermined by her appearance (Al frequently refers to her as resembling a young boy, or a plucked chicken); and, in later seasons, Jefferson, Marcy’s trophy husband, who is portrayed as sexually attractive and competent, but economically useless, sponging off Marcy’s success as a banker. In early seasons, Marcy was married to a man named Steve, also a banker, who was something of the “straight man” of the show; he later left Marcy, feeling emasculated despite his economic and sexual success, quitting his bank job to become a forest ranger. 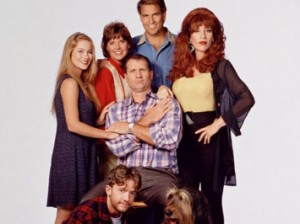 Now, a major trope of comedy is the happy ending (Shakespearean comedies, for instance, tend to end in marriage); the episodic format of the television situation comedy, though, commonly requires that the ending of each episode not rock the boat too much. A drastic change at the end of each episode could easily alienate audiences. And so this translates into the overriding theme in the sitcom that status quo is king, and everything will end up pretty much the same at the end of each episode as it was as the beginning. MWC and Seinfeld both balance the happy ending vs status quo tension by making the primary engine of their humour the fact that the protagonists are all sociopaths.

Comedic sociopathy as the engine of humour in both MWC and Seinfeld effectively balances the tension between the happy ending versus status quo by allowing the audience to shift the focus of our sympathy between different characters on an episode-by-episode basis. A tragic ending for one character can be hilarious because we’re directed to empathize with a character in that episode who is set up as the loser’s antagonist, and this affinity can be different in every single episode. We see comedic sociopathy in action in MWC, where it comes from the principal characters intentionally insulting each other, as well as the poetic justice of these unpleasant people being treated poorly by the universe.

In Seinfeld, nearly the opposite is true – the comedy (or “comedy”) there originates in the fact that the group of main characters have no empathy for anyone but themselves (and, arguably at times, don’t even care about themselves very much either). Their self-absorption and obsession with triviality leads to them destroying the lives of the people around them (who are frequently visible minorities); this destruction is not malicious – it’s generally unintentional – but it doesn’t ever seem to bother them very much, either. 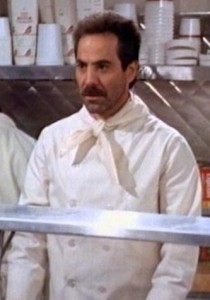 The exception to the characters in Seinfeld’s indifference to the suffering of others is typified by the rivalry between Jerry and Newman. They actively dislike one another and are portrayed as antagonists throughout the series in a way that the characters who are not much more than mere talking scenery are not granted. The dyad between Jerry and Newman is perhaps the most explicit expression of the show’s existentialism-bordering-on-nihilism. Not only is Newman a postal worker – symbolizing the government and systematized transpersonal structures in general while at the same time bringing to mind the constant threat of violence at the hands of some force of righteous anger – but the very name, “Newman,” is a homophone of numen, from the Latin, a philosophical concept referring to a spiritual reality or influence that is imperceptible by the physical senses. Immanuel Kant coined the term “noumenon” (plural, “noumena”) in contrast to “phenomenon,” in which the noumena are in essence the Platonic forms that exert their influence imperceptibly on the physical world of phenomena. Jerry Seinfeld’s animosity toward Newman symbolizes Seinfeld’s opposition to numen, that is, its rejection of the significance or even the existence of anything but the most absolutely mundane, individualistic and materialist concerns.

Sitcoms frequently use their final episodes to drastically undermine the restoration of the status quo; since there won’t be any more, things are free to change as drastically as the creators would like them to. And yet, both MWC and Seinfeld decline to shake things up at the end, and the way that they do this makes the clearest statement for each of their existential models as well as typifying their between MWC as a comedy and Seinfeld as … not one.

The final episode of MWC does in fact culminate in a wedding – Kelly, the promiscuous daughter, gets engaged to a criminal who is also the heir to a fortune. The classic sitcom trope of the backyard wedding occurs, and we’re prepared to accept this change in the status quo because we know that it’s the end of the series. When Al learns, however, that Kelly’s prospective husband has no intention of staying faithful to her once they’re married, Al invokes one of his most common running jokes of the series – inflicting casual violence upon one of Kelly’s suitors. Despite the fact that Kelly marrying this man would likely have the Bundys financially set for life, Al chooses marital fidelity and his love for his daughter above the economic success that has eluded him and decimated the image of his masculinity for the past eleven years of the series – the final frame is a shot of Al punching the guy’s lights out.

As I mentioned earlier, the existentialist prototype for this is Camus’s Myth of Sisyphus. Camus retells the Greek myth wherein Sisyphus is condemned to roll a heavy boulder up a mountain for all eternity; as soon as he reached the top, the boulder would roll back to the bottom and Sisyphus would have to trudge down and roll it back up again. Camus likens the pointless and interminable task to the life of man – forced to toil just to stay alive in a world seemingly devoid of justice or meaning.

This describes the situation of Al and the other characters in MWC perfectly. And yet, they heroically endure. Therefore when, at the end of MWC, the status quo is restored, it’s a happy ending. Despite the fact that everyone involved is almost constantly miserable, there is a core of empathy there that makes that situation preferable to the alternative. As Camus explains, “The struggle itself … is enough to fill a man’s heart. One must imagine Sisyphus happy.”

At the end of Seinfeld the status quo is restored as well – even though the main characters have been sentenced to a year in prison simply for obeying their character and failing to intervene when they witnessed a crime in progress, it doesn’t really make any difference in how they live their lives. In fact, the conversation they have in their cell at the end of the last episode is the exact same one they were having in the first scene of the first episode.

And yet this ending was widely considered unsatisfying precisely because it was the ending of a comedy – which Seinfeld, ultimately, isn’t.

Its own existential model is Satre’s No Exit, in which a group of dead people condemned to hell realize that their punishment is simply that they have to spend eternity in the same room with this bunch of assholes. At the end of the play, they do laugh – but it’s not a laugh of happiness, and if it’s a laugh of amusement it’s a particularly hollow one. This tracks perfectly with the final scene in Seinfeld – a perfect ending, as a matter of fact, given the themes of existentialism and post-modern absurdism that the show relentlessly plumbed.

And yet Seinfeld‘s finale was poorly regarded by audiences and critics alike – why?

Perhaps it was only subconscious, but because the audience of Seinfeld believed they were watching a comedy, they expected some sort of redemption for the characters at the end. Restoration of the status quo is a perfectly conventional comedy trope, but the realization that the lives of Seinfeld’s characters wouldn’t be any appreciably different even if they were locked in a five-by-five-foot-square room is not funny. It’s actually kind of horrible. It’s just the final proof that, in Seinfeld, hell isn’t just other people: hell is yourself. What’s so funny about that?

NEXT: Why Perfect Strangers is superior to Cheers.

[What say you, Overthinkers? Does Seinfeld despair in humanity’s eternal struggle while Married With Children celebrates it? Or are they both good for a laugh at our human failings? Sound off in the comments! – Ed.] 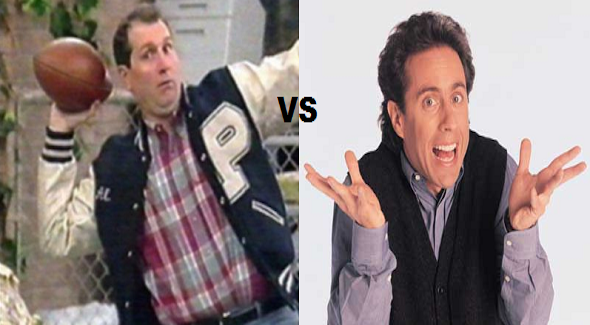 Richard Rosenbaum is a writer from Toronto who edits fiction for The Incongruous Quarterly and Broken Pencil.

16 Comments on “Married with Children vs. Seinfeld”