Twenty-three score and seven days ago, Disney brought forth on the silver screen a new epic called John Carter. You will little note, nor long remember what I write here, but you can never forget what John Carter did here (and by here, I mean on Mars).

The basic plot is that Civil War-veteran John Carter is accidentally transported to Mars in the midst of a classic showdown between good and evil; good represented by the peaceful city of Helium, evil by the marauding city of Zodanga. The leader of Zodanga has recently received a devastating new weapon from the meddling, god-like Therns. 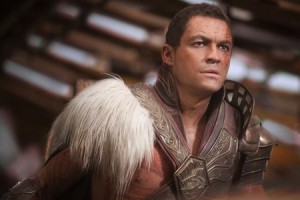 Carter, predictably, uses his new-found power jump and super strength (caused by gravity difference and “bone density,” or something; it’s not explained well) to rescue the princess of Helium from extorted marriage to the Zodanga leader, defeat the Zodangans, and marry the princess himself, happily ever after.
However, the marriage to the Helium princess is not Carter’s first. He previously had a wife and daughter on Earth who were killed by enemy soldiers during the war. Carter’s motivation for getting involved in the Martian conflict is his desire to regain what he’s lost, what was taken from him. On Earth he’d given up on great causes, surrendering himself to the quest for wealth that inadvertently takes him to Mars, where he is inspired to engage again in a great struggle. The adventure on Mars is Carter’s do-over, his attempt to replay his past. But …

John Carter is from Virginia. He fought for the Confederacy in the Civil War. It was Union soldiers that slaughtered his family; Union soldiers are presented as the first villains in the narrative as they try to force Carter to join them in some old-fashioned, Yankee-style Indian killing.

The real story of John Carter is an alternate history of the Civil War from the Confederate point of view. John Carter is transported into the midst of another conflict between cultures. Defeat means forced union, a loss of tradition, the eventual death of civilization. But this time, with John Carter’s help, the ‘South’ wins.

The first time we’re introduced to John Carter is in the city of Richmond, Virginia, where he’s dashing through grimy, rain-drenched streets trying to evade a mysterious pursuer to send a telegraph to his nephew, Edgar Rice Burroughs. Richmond served as capital of the Confederacy through most of the Civil War. The Richmond we see is a city mired in depression and defeat, forced painfully into colorless, crowded urbanization due to the outcome of the conflict on Earth. Everyone is wearing black and huddling under their umbrellas in a scene reminiscent of the streets of Los Angeles in Blade Runner. This history as it actually happened is clearly not as it should be, warning of the fate of Helium should Carter fail in his mission to Mars.

The Civil War allegory on Mars is fairly straightforward. Helium represents the Confederacy and Zodanga the Union. This is evident before we even get to the plot, just through what we learn about their cultures. Helium is a shining city on a hill (on a pillar over the edge of a cliff, to be exact), led by an aristocracy of honourable, gods-fearing warrior-poets who live, literally, in an ivory tower. Even the name of the city evokes a light-hearted buoyancy, an ability to rise above everyday troubles. Appropriately, we never see the common people of Helium, the ones that toil in the red Martian dirt to feed, clothe, and arm the Helium elite. Zodanga, by contrast, is a gritty, crowded, industrialized place. It is literally impossible for anyone in Zodanga to ever put down roots, as the city is always on the move, creeping across the land.

Helium is firmly bound to the land yet rises above it; Zodanga has no land but what it destroys in passing, yet can’t escape wallowing in the dust. This reflects how the Confederate plantation owners and other aristocracy viewed themselves and their urbanized Northern opponents in the run-up to the war.

Sherman’s March to the Sea

We’re told in the opening voiceover that Helium is the last holdout against Zodangan hegemony on the planet. We’re not told what Zodanga has done to brand them as the bad guys or why the audience should side with Helium; the filmmakers take it as a given that we will naturally side with those who simply want freedom over subservience. From the beginning of the film the Zodangans are offering a peaceful solution to avert Helium’s destruction: union of their peoples symbolized by union, through marriage, of their leaders. Yet forcible union, like Zodanga’s advance, is a condition to be resisted to the death, from John Carter’s and the Helium princess’s point of view.

Helium and Zodanga are not the only two players in this allegory. When John Carter first arrives on Mars he is captured by the Tharks. While the people of Helium and Zodanga are very human-like (except for a little bit of red tattooing), the Tharks are clearly non-human, and are in fact presented as entirely sub-human, unless you are judging based on number of arms. Their brutal culture is evident from the start, as several warriors nonchalantly shoot their un-hatched eggs, stating that if they’re not strong enough to hatch on time they’re not strong enough to deserve life. They have no family structure other than the tribe, no one knowing their father or mother; new hatchlings are simply property to be fought over. Leadership is earned by mortal combat, and they punish rule-breakers with ritualized branding.

Yet we were told in the opening narration that Helium and Zodanga were the two remaining cultures on Mars. Even the narrator does not give the Tharks due consideration. Yet John Carter, in his ignorance, befriends an important Thark and joins the tribe. He eventually comes to lead them, even though in a previous scene he slaughters countless Tharks in a blind rage with seemingly no repercussions.

From this description it is clear that the Tharks represent the slaves in the Confederate south. From Helium’s point of view the war is not about Tharks, it is about freedom. The Tharks are not worthy of consideration except as sub-human savages in the wasteland. Yet it is the Carter-led Tharks that arrive just in time to stop the wedding, thwart Zodanga’s treachery, and turn the tide in the final battle for the freedom of Helium (even though they are clumsy about it, because, you know, they’re not real warriors). Just as the slaves could have turned the tide in the Civil War if they had stepped up and fought for the Southern cause! Neither the Tharks nor the slaves would be fighting for their own self-interest, but that doesn’t matter because they would be fighting on the side of good (from the Confederate point of view).

The final actors in this allegory are the Therns. These “overseers” with technology sufficiently advanced to be considered magical have come to watch civilization on Mars die, but aren’t content with just observing. They give the Zodangan leader a powerful weapon to vaporize his enemies and continually try to interfere with John Carter while he’s interfering with the Martians. The Therns represent no one person or group in Civil War times; rather, they represent the moral authority behind the abolition movement and the economic allure of industrialization (they’ve got whole caves of gold!). From the Confederate/Helium point of view, the Therns are the inherently misguided and amoral influence that unfairly empowers their enemies and aims to cause the destruction of the culture they hold dear. 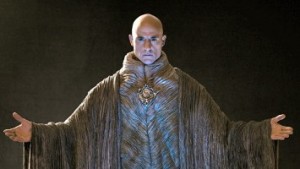 Now a few caveats. First, this analysis is based entirely on the 2012 Disney film John Carter, not on any of the novels by Edgar Rice Burroughs or subsequent comics (although the film deviates appreciably in many of the details referenced above, based on my extensive Wikipedia research).

Second, and more importantly, I will not make the argument that Disney released this film as a deliberate statement that the Confederacy should have won the Civil War (they wouldn’t go there, when they’re still dealing with the 60-year-old controversy over Song of the South). Rather, I believe the filmmakers are exploring that fundamental question of science fiction: “What if?” This question is especially pertinent now as many are commemorating the 150th anniversary of that war. How would we look back on that conflict if the result had been different? Disney yanks the protagonist back to Earth on the night of his victory, thereby deliberately overlooking the need to examine the aftermath of the war to any extent. We should expect any sequels to avoid reminders of Carter’s Confederate past and handle the Tharks more equitably. In addition, ambivalent reviews and meagre domestic box office returns could demonstrate America’s rejection of this alternate history and re-embracing of the rightness of the Civil War’s result as it actually happened (it’s notable that the film has done fairly well overseas, especially in Russia).

Anyway, I think we can all agree this treatment by Disney was vastly preferable to the most obvious alternative: Mars Needs Moms 2. Clearly the Mars of John Carter needs more moms; literally the only mom in the film is Carter’s dead wife. A few Martian moms might have nipped this whole conflict in the bud. If they couldn’t stop the war, they’d be left only with the cherished memory of the loved and lost, and the solemn pride that must be theirs to have laid so costly a sacrifice upon the altar of freedom. 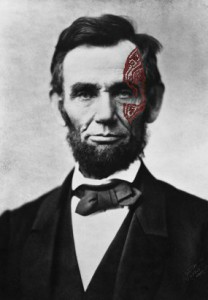 [What’s your verdict, Overthinkers? Does John Carter retell the Civil War with the Confederacy as the heroes? Or is there a different clash of historical forces being depicted on Mars’ red soil? Sound off in the comments!] 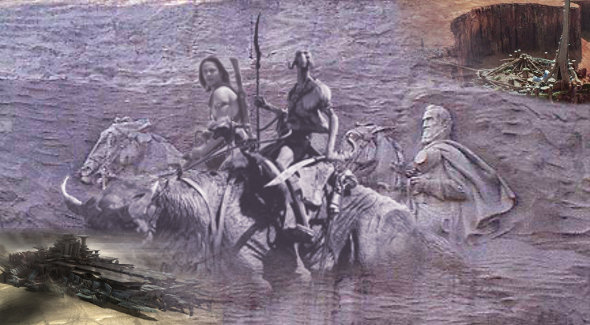 Mark is an expat living in Europe and heavily involved in Overthinkers Without Borders (Pluspenseurs Sans Frontières), an organisation committed to promoting overthinking on a global scale.

10 Comments on “Sic Semper Zodanga: John Carter and the War of Martian Aggression”