[As the first half of S1 of Avatar: Legend of Korra heats up in an explosive one-hour mid-season event, the Overthinkers tackle the science and practice of earthbending.]

Perich: Avatar: Legend of Korra takes place 70 years after the original series. Toph Bei Fong founded the first police department in the high-tech (think 1920s Shanghai) Republic City. She created a corps of police officers, all of whom are trained in the elusive art of metalbending. They wear suits of armor threaded with high-tension wires that they use to swing, pole-vault and lasso around the city. It’s really cool.

In episode 7, Lin Bei Fong (Toph’s daughter), Korra (the new Avatar) and some friends square off against a terrorist mastermind. He’s built suits of walking mecha-tanks out of platinum, which Lin is powerless against. “Not even your renowned mother could bend a metal so pure.”

Is this legit science? Or even on speaking terms with same?

Platinum and iron are both elements, so I don’t think one is necessarily “purer” than the other on the atomic scale. Wikipedia tells me that platinum is a noble metal, highly resistant to oxidation, and that it’s the least reactive metal. Could that be what makes metal “bendable” – its oxidatable properties? (Keep in mind there’s no canonical answer to this yet; we are breaking new grounds in bending theory)

Fenzel: Platinum has a few properties that make it describable as “pure.” As you mentioned, it doesn’t tarnish much or easily. It is extremely difficult to corrode. It doesn’t wear out. It is very conductive. It is used in high-precision and high-tech stuff associated with purity, like computers, dental equipment and catalytic converters.

Although I think really what to consider here is the relationship between Platinum and Silver. Silver has long been seen as quasi-magical. It kills werewolves and vampires, etc. Even Muhammad rocked silver.

But silver was also used to purify water, treat wounds and fight infections since ancient times. Silver solutions were certified by the FDA as antibacterial. That and its top-of-the-line conductivity and value as currency.

So, yeah, that’s my take. That the platinum mech is supposed to have a similar mystical quality to silver, but even moreso, because it doesn’t corrode or tarnish. 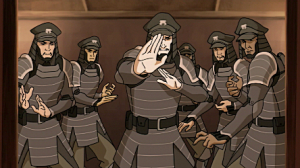 Shechner: Note that Platinum, while difficult to oxidize (oxidization here serving as proxy for all chemical reactivities), is far from chemically inert. Di-amino-adducts of platinum–the canonical “cis-platin” being a chief example–have for some time now been used as moderately effective chemotherapeutics. Heck, if you’re good enough at chemistry, you can get almost anything to bond to anything else. The “bending” of platinum might serve as allegory for its amalgamation or chemical perturbation: it would take a true master to achieve such changes with subtle control.

I’ll also throw out there that this could be an oblique reference to the isotopic content of the two metals. True, most terrestrial isotopes of Ag and Pt are exceptionally stable, the vast majority of their masses being nonradioactive or exceptionally long-lived (190Pt has a half life of ~10^11 years). However, while there are some 31 naturally occurring radioisotopes of silver, all analogous species of platinum have been artificially generated. Hence, if an immortal being were handed a kg each of naturally-mined silver and platinum, after an eternity had passed, he’d have more Pt on hand than Ag. 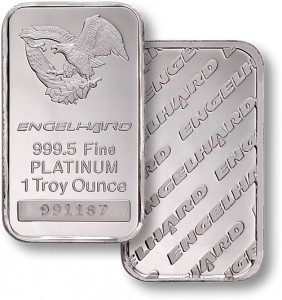 Stokes: There is something odd about using Platinum’s traits as a Mendeleevian element to critique its treatment as an Aristotelian element — odd, but totally on-mission, so go ahead. A couple of thoughts:

1) The notion of metal being unbendable seems to have to do with its status as a work of man rather than a naturally occurring substance. Any earth bender can move rocks, but convert those into ingots, and suddenly they won’t bend a bit. This has a resonance with the more general tech vs. nature subtext of the original series. (Of course, firebenders don’t have any problem with using manmade fire — but whatever.) Titanium would in this case not be a good choice for bend-proof metal, because you can pull lumps of it right out of the ground, at which point they ARE rocks and therefore bendable. Aluminum, on the other hand…

3) On the other hand, we could take the show at its word and say that earthbending, and by extension metalbending, depends on the heterogeneity of the material. (For this to hold, most gemstones would also need to be unbendable, right?) This had interesting implications for Avatar-verse metallurgy, because presumably you could achieve metals of unimaginable purity (by real-world standards) by melting the ore and then simply trying to lift it by earthbending. All of the impurities would lift, and the pure ore would be left behind. (This ignores the fact that many impurities are themselves metals, but whatever.)

So getting pure metal – platinum or otherwise – would be trivial. Keeping it pure is another thing. Metals stored in a corrosive environment like our atmosphere are basically always covered with a thin layer of oxide regardless of how pure they are otherwise, right? And here the non-reactive quality of platinum actually *would* make a difference, although I’m not sure how big it would be… Presumably there’s less oxide on the surface of a platinum mech than there would be on an iron or aluminum one, at least over the short term.

The real question then becomes whether pure platinum is hard and resilient enough to be structurally useful, or whether Korra et. al. should be able to spread those mechs on toast with a butterknife.

[What say you, pro-benders? Is platinum truly proof against metalbending, or will the can-do spirit of Republic City find a way? Also: how are you liking Korra’s adventurs? Sound off in the comments!] 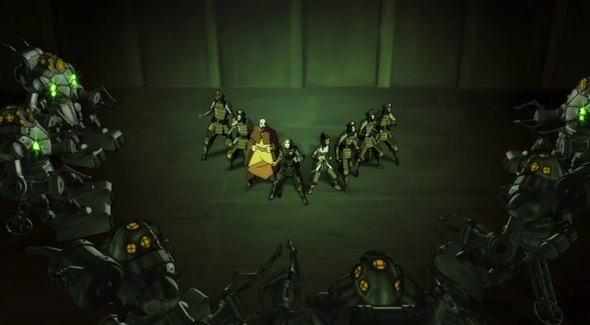