“Where did you grow up?” they ask.

And I nod and say yes, of course I am. Everyone from Baltimore has seen The Wire. Some of us saw it as it aired; some of us (myself included) took years to come around. But everyone’s seen it. You have a better chance of connecting with a stranger from Baltimore by bringing up McNulty and the Barksdales than the Orioles.

That’s unusual, for either a city or a TV show. Manhattan is as much a character in Sex and the City as Baltimore is in The Wire, and yet you wouldn’t assume someone from the Upper West Side must have seen all six seasons. Nor would you presume the same about Treme and New Orleans, or the 90210 revamp and Los Angeles. Baltimore has become uniquely entwined with this one piece of pop culture – a show that, in the grand scheme of thngs, wasn’t even that popular – in a way that few cities are. I think the only comparable connection is New York and Sinatra’s cover of “New York, New York.”

Part of that has to do with the city. Baltimore doesn’t have a lot of other things going for it in the cultural eye aside from this one show. Sure, the Ravens won a Super Bowl over a decade ago, and the Orioles are top of the AL East for now (nothing matters before the All-Star Break, though). The Inner Harbor is a lovely collection of storefronts and museums, as everyone who’s ever spent a weekend in Baltimore tells me. I don’t tell them that they saw everything worth seeing. Despite being one of the oldest cities in America, there’s not a lot of culture or local industry anymore. So when every critic in America starts talking about your hometown, it’s a rare bit of attention.

Part of that, however, also has to do with the show.

The Wire is one of those rare shows that lives up to all its hype. If critics disagree on any part of it, it’s over whether the show is merely an epic look into the heart of a city and its residents that few forms of art, to say nothing of television, could ever achieve, or whether it’s the single greatest thing that the medium of television has yet to produce, up to and including coverage of the moon landing.

The Wire delves into Baltimore with both an intensity and a broadness that few artists can pull off, an immense clarity on both the microscopic and macroscopic scale. It’s filmed in diegetic locations, the actual housing projects and bars and corner stores and public schools that the characters, if real, would visit. It’s written and produced by people who lived and worked in Baltimore for years. In addition to its talented stable of actors, the show also features actual Baltimore residents – actual police officers and drug dealers, in major recurring roles. Nothing short of a documentary could achieve such verisimilitude.

That speaks a great deal to the show’s enduring popularity within Baltimore, even for the unflattering tableau it sets. Everyone wants to appear on TV. Showing up on the screen grants you a slice of immortality and fame. And there’s no doubt that The Wire tells the truth about Baltimore. It gets too many of the details accurate, even to the point of agony. People love to get their side of the story told.

Sure, The Wire makes Baltimore look like a crime-ridden, poverty-choked pile of crumbling bricks. But it’s nobody’s fault. The drug peddlers grew up on the streets, abandoned by schools that don’t have the resources to give all of them – or, really, any of them – useful skills and contacts, even presuming the curriculum were capable of doing so. They’re chased by cops, who are pressured by their commanders to reduce crime stats by any means necessary, who are pressured by civic government (City Council and the Mayor’s office) to reduce crime, who are pressured by the voters to keep gun battles from happening on their doorstep. All they can hope for is to die painlessly, or to live long enough to become irrelevant.

Who is at fault for that? Who’s the one person who, if you removed them from power or put them in jail or put a bullet in their skull, would stop damming the flow of peace and justice?

I’m hardly the first person to say this, and this isn’t the first time I’ve said it, but: The Wire is about the way that institutions can grind people’s lives into dust. An institution, anything with a code of conduct and more than one generation of history, becomes an organism in itself. It takes on interests different than those of the people who staff it. The Baltimore Police Department notionally wants to prevent crime and arrest criminals, but it really wants to guard its purview against the predations of elected officials. If mending its fences means allowing crime to go unpunished, then so be it.

So, yes, there’s something obviously soothing about a show that tells you that the evils which plague your city are not your fault. But The Wire isn’t meant to soothe. It’s meant to agitate. When you see Wallace flipping on light switches with power that’s boosted from a neighboring tenement and pushing snacks into the hands of half a dozen other kids, you realize how useless the mantra of “stay in school” is. When Tommy Carcetti learns that he can’t get education funding from the Governor without throwing his own career away, you wonder how sincere anyone’s commitment to “putting our children first” can be.

All this has been covered before, in greater detail and by better writers. So why bring it up now? Because it’s my hometown that it’s happening to.

Critics praise the artful though melodramatic way that Mad Men depicts the struggles of women in the workplace throughout the 60s. In doing so, it calls attention to the subtle and unconscious forms of sexism that still afflict women today. And yet it’s easy to dismiss those lessons because of Mad Men‘s fictional remove. Oh, this is a show about the 60s; we’re better than that now. This is a show about advertising executives; our office has sexual harassment training. This show is about a fictional firm; my real company (which has been around since the 40s) doesn’t have these problems.

You can take away similar lessons from Game of Thrones, with its unflinching look at the effects of war and nationalism on the underclasses. Hell, even Friday Night Lights shines a piercing light on the way high school football can animate – or paralyze – an entire town. And yet the veil of fiction protects us from the full brunt of these shows and their themes. We watch, we nod somberly, and we don’t feel compelled to do more.

But The Wire is, for all the art in it, not fiction. This is actually happening! That’s my hometown where tens of thousands of young men and women are condemned to a life of poverty that they’ll pass onto their children. Where the police swing from one high-concept policy to the next, from buy-busts to elaborate stings to CompStat grill sessions, treating the city they’re sworn to protect like an occupied territory because that’s the only way they can get results. Where industries that built this country, like shipping and fishing and construction and power, are withering or fleeing.

In this light, the muted discussion that accompanies serious dramas like this one feels like a sick joke. This is an actual city full of real human beings who are suffering and dying. To discuss it with intellectual detachment, murmuring about how cruel institutions can be, seems inhumane.

And yet that’s the best option available to us. Because The Wire has another lesson to teach us: doing something, purely in the name of taking action, is just as likely to make things worse as better. Burrell’s CompStat program; Colvin’s hellish Hamsterdam; Carcetti’s bold policies; even McNulty’s faux serial killer. To charge down a worse path, blindly, is no better than trudging down a bad path.

So what do we do, then? If the plight of Baltimore affects us – and who could watch The Wire and remain unmoved – what is our course of action?

I couldn’t tell you. I don’t have an answer to the riddle of convincing people to look on each other as humans, not statistics on a government ledger or fiends to be hustled. But somebody out there must. And the thing that inspires them to find a creative solution to generational poverty and institutional neglect might be seeing the fate of Wallace, Frank Sobotka, Stringer Bell, Randy Wagstaff or Omar Little. Until right action can be uncovered, awareness must serve.

So keep doing what you’ve been doing: asking your friends if they’ve seen The Wire yet. Because it’s just as good as everyone says. 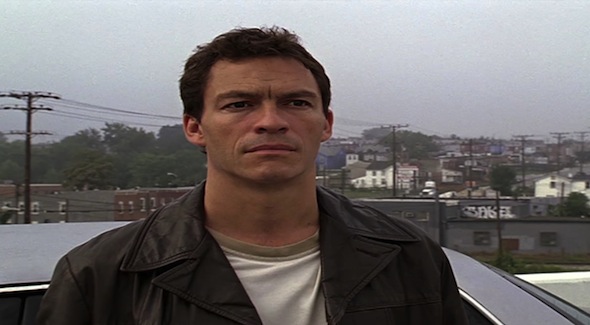 17 Comments on “Ten Years of The Wire”