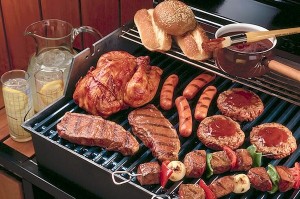 Happy Memorial Day Weekend, Overthinkers! At least for those of you in the United States, that is. For the rest of you, we’re sorry to remind that (at least for this weekend) your countries are vastly inferior when it comes to barbecues and military tributes. But here’s a military tribute we can all be proud of: we’re highlighting some of our favorite comments and forum posts related to our ongoing celebration and analysis of the seminal naval warfare film Battleship.

If Brooklyn Decker had started craving a chicken burrito 10 minutes sooner, Earth would have been conquered by aliens.

Here’s one of the many awesome board game movie adaptation ideas from the forums, since we know the studios will be looking to, um, replicate the, um, smashing box office success of Battleship.

A man stops in the rain to help a blind beggar. When he stops for gas, he finds the hitchhiker gone, and in his place are his begging tin and a set of 5 hand carved dice. When a young woman swerves into his lane in a fatal accident, the dice spill out as perfect 6s, returning her to life. Unable to understand what has happened, he brings her home and together they discover the mystic power of fate the dice contain. Be warned though, eventually the roles must stop, their only hope, is “Yahtzee”.

Hollywood, are you reading this?

We’re test driving this as a new format for our Open Thread, and in doing so, we hope to both reward our readers for their fantastic contributions to the discussion on the site as well as invite everyone else to participate, both in the forums and in the comments.

In the forums, join any number of exciting conversations around board game movie adaptions, the final season of 30 Rock, and everyone’s favorite anthropomorphic mystery, the Goofy Pluto Dilemma.

As for comments, talk about anything you want here, for this is your… Open Thread.