“The cake gag is only funny when the sap’s got dignity!” – Krusty the Clown

The traditional aim of comedy is to reveal truths in a surprising way, classically centering on demystifying social hierarchies for a mass audience. A cake in the face of a man wearing a business suit and an Ivy League demeanor reveals the illusory nature of status positions by immediately dissolving his pretensions. That tradition has been eclipsed by the recent trend of ostensible “offensive humor”. Despite the description, the transgressive nature of this comedy is never directly insulting to the audience that primarily seeks it. “Edgy humor” is often designed specifically to reassure an audience of heterosexual white men of the validity of their superior social status in a time where the significance of that status rapidly seems to be eroding under the attacks of a growing, strengthening population of “others”.

But you knew that. The “political correctness backlash” that’s informed public media and private conversation alike over the last couple of decades has been well recognized, not the least by habitual overthinkers of pop culture. One show, however, completely subverted that trend. The mid-aughts series Drawn Together wore “offensive humor” armor like a Trojan horse, only to disseminate an unusually progressive point-of-view. 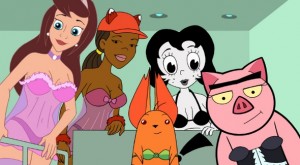 Drawn Together was generally regarded by critics as irredeemable for being grosser than any other gross-out comedy yet. Overlooked by detractors though were a number of commendable attributes that were overshadowed by its hit-and-miss over-the-top character. Principally it was the definitive bookend to the animation renaissance of the 80’s and 90’s; a loving, well-executed parting gift to the generation of people who grew up during the Silver Age of cartoons. It also had great characterization, hinting at credible developments of offscreen relationships through incidental interactions on the periphery of main scenes. But most notably, while its attempts to cheerlead liberal positions through satire were obvious, it backed those positions up with a genuinely progressive attitude that belied its surface-level irreverence.

The clearest sign that this show was different was its being an ensemble program without any white men as main characters (yes, Captain Hero looks exactly like a white man, just like his inspiration, Superman; and while neither properties explain why they have looks that place them distinctly among the most powerful political group in the world, neither are even human beings, let alone white men). Furthermore the de facto leader of them all (and the best, most fleshed out character on the show) is a black woman, Foxxy Love, who’s defined by an amalgam of stereotypes so conflicting that they successfully give lie to them all.

Foxxy is simultaneously (1) the show’s wise voice of reason, (2) the marginalizing role traditionally delegated to token black and female characters, and (3) financially and sexually irresponsible. This combination allows the producers to extend their use of these disparate tropes past replication to commentary. By directing everyone else, Foxxy nullifies the traditional marginalization that comes from correcting the mistakes of others. By being the most intelligent person in the group, Foxxy’s personal irresponsibility changes from offensive degradation to a comical character flaw. 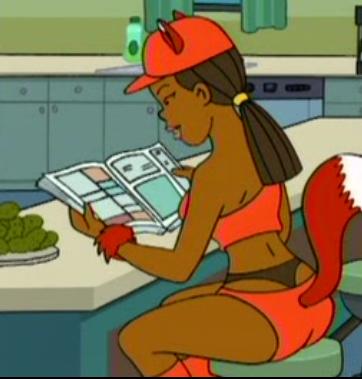 However the primary way the show garners good faith is through a respectful familiarity of their target. While other shows rely on established media roles and attributes for blacks when developing their characters, Drawn Together brings a sense of knowing their material. There’s a naturalness in Foxxy’s black-accented speech (and a validity to the dialect) that makes her idiosyncratic constructions and malapropisms funny out of a sense of recognition rather than otherness. Her classic line “If I put my name on a bag of Funyuns, them ain’t your Funyuns!” works (despite its cringeworthiness in print) because of its unusual familiarity. The line’s construction is spot on, down to the brand name. This isn’t something in the classic rotation of black media stereotypes, and reveals thoughtfulness refreshing to someone accustomed to a dismissive level of misrepresentation in the media. This joke was written for black people, not someone for whom black people are a distant idea.

Lines like these also work because of the actor’s perfect delivery, characterized by a subtlety that encourages all audiences to identify with her, rather than push them away by punctuating her possibly unfamiliar speech with a clownish voice. Noteworthy too is that while the point of her character is to be an amalgam of black stereotypes, including her speech, they don’t draw exclusively from the post-hip hop well of slang and defiant attitude. Her dialog comprises the entire cinematic history of stereotypical black dialect, a move that again, through Cree Summer’s sympathetic ownership of it, works as commentary rather than mere “ironic racism” replication. It’s ultimately a grand thesis which proves that stereotypes as an issue are entirely a red herring in the conundrum of racial discrimination. While they usually help perpetuate marginalized groups’ status as “them”, the problem is ultimately, and solely, a lack of recognition of individuals’ humanity. And through sympathy and unassailable respect for Foxxy Love, they avoid the dismissiveness that stereotypes usually encourage and successfully establish her as the show’s primary “us”.

A greater praiseworthy feat of the show is packing it full of AIDS jokes while never making having AIDS or being HIV positive the punchline. “Feat” is an understatement. As devastating as the disease is, the mainstream attitude is that it’s more an abstract concept than a genuine threat. Most comedy then ridicules AIDS from the point of view of someone that knows it’s bad but doesn’t ever have to worry about it, so it’s as funny to think of someone as having AIDS as it is to see a piano fall on a cartoon character’s head. 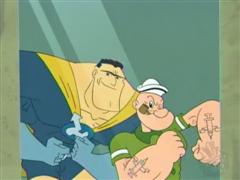 Their most AIDS-focused episode, “The Lemon-AIDS Walk” featured Popeye himself (yes, an unadulterated Popeye. Another feat of the show was stretching fair use to the limit by consistently featuring accurately rendered cartoon cameos. Popeye was even voiced by his current official voice actor, Billy West) dying of AIDS. It was a plot point to re-center Captain Hero to quitting steroids and participating in the AIDS Walk, and the melodrama of the revelation and death (all in one scene) was silly and over-the-top, but there was never a point where the joke was the idea that someone would have AIDS.

Another scene with plenty of parallels in other comedies highlights Foxxy Love’s sex addiction by being unable to refuse a string of telephone propositions from famous men (each call follows a completed sexual encounter in cartoon rapid-fire). It comes to a head when Magic Johnson calls. From her side we hear “Pick up some what? You don’t need those, Papa. I’m on the pill”. Where Saturday Night Live (“You slept with Magic Johnson before me? ‘Gulp’.”) and The Cleveland Show (“Don’t have sex with Magic Johnson!”) expects us to consider Johnson merely an idea (AIDS itself apparently) from which to draw ridicule, here he retains his humanity. Foxxy is the sole butt of the joke as a person who rebuffs an HIV-positive man’s attempt to protect her from infection.

There are plenty of other progressive examples. Toot, an obsolete sex-symbol from the 30s (i.e. Betty Boop) highlights the arbitrariness of beauty standards and reveals the psychological toll basing one’s identity on attractiveness takes when that attractiveness is gone. Wooldoor heads an inclusive children’s show where the BK Kids Club-esque multi-ethnic/ability makeup of the cast is never ridiculed (where Family Guy’s Stewie convinced a similar group of children that they’re naturally inclined to hate each other). Its unconditional acceptance of homosexuality is easily apparent. Every moment that seems to be in service of “the male gaze” ridicules “sexy” tropes though clumsy application and disgusting extremity (see the DVD movie’s well advertised “3D sex scene” for the best example). And from head to end of each of her sexual experiences, Foxxy never shows an inkling of submissiveness. Her world is an Elysium where sexual assault is never a possibility (excepting that aforementioned 3D sex scene, which ends her verbosely protesting a particular sexual act as “offensive to women” right before it’s done to her, but it doesn’t play that as straight as it sounds).

Of course, Drawn Together isn’t a perfectly consistent paragon of socially conscious humor. The show isn’t above ridiculing mental retardation, among other disabilities, and Toot’s unattractiveness is often played straight as an object of ridicule. Also I personally can’t account for the acceptability of the character Ling-Ling as a vessel for regurgitating Asian stereotypes (and one of the commentary tracks reveals that an Asian crew member expressed deep reservations about an episode that centered around him).

Still, the show holds an unusual distinction of getting “so much right” while genuinely being “edgy” in the sense that transcends the popular perversion of that term. In a truly subversive manner, Drawn Together champions a politically correct sensibility for an unsuspecting “offensive humor” audience.

[Was Drawn Together secretly spreading a message of tolerance with a sly wink? Or was it, in fact, as offensive as it purports to be? Sound off in the comments! – Ed.] 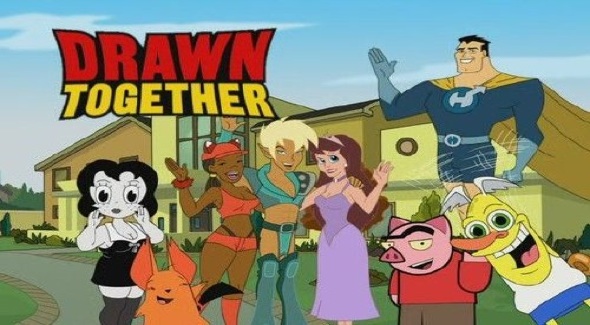 Jeremi daylights as a Publications Assistant and Internet burnout in Washington, and otherwise neglects his Tumblr site “Gaming Before Gaming.”

7 Comments on “The Subversively PC Drawn Together”