With the upcoming release of the super-superhero movie The Avengers, I’ve started to subject the title of the movies/comics to a level of scrutiny it probably doesn’t deserve.

I found “Avengers” to be an odd title for a group of heroes. “Avenge” has a bit of a menacing quality to it, mostly due to its similarity with “vengeance” and “revenge” (more on “revenge” later). These are supposed to be the good guys, right?

First, let’s ground ourselves with a dictionary definition of the verb “avenge”:

Inflicting harm on someone is an inescapable part of avenging, and very much what The Avengers will likely do in this movie. After all, it’s not called “The Mediators” or “The Kill-Them-With-Kindness-ers.”

This led me to think about the appearance of “avengers” and “avenging” in other movies, and whether or not they are portrayed in a positive light. To be systematic about it, I did an IMDB Quote Search on the word “avenge,” which returned quotes from movies (and TV shows as well, but we’re putting those aside for now) that include the word revenge. I took the top 20 results and classified them (to the best of my knowledge) as Positive, Negative, or Neutral based on how we, the audience, are meant to relate to the “avenging” being spoken of in the quote.

The results surprised me: 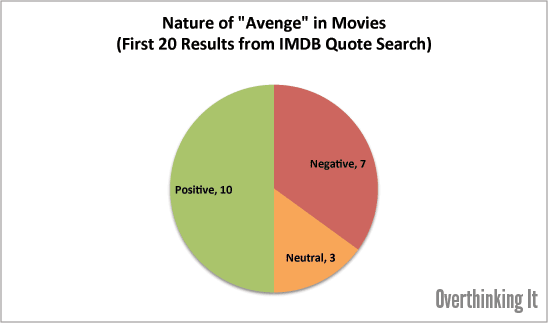 (Note: I haven’t seen all of these movies, so if my P/N/N classifications are inaccurate, let me know in the comments.)

Of the top 20 quote search results, half of them treated “avenging” in a positive manner. 7 of 20, or 35%, portrayed “avenging” as something negative, and the remaining 15% had a neutral stance on “avenging.”

Based on my gut reaction to the word “avenge,” I was not expecting the proportion of movies that took a positive stance on “avenging” to be so high. So maybe our plucky team of do-gooding superheroes is aptly named, after all.

But remember how I mentioned the word “revenge” earlier? It sounds an awful lot like “avenge,” which is part of the reason why thought “avenge” would have some negative connotation.  Its dictionary definitions are also very similar to those of “avenge”:

Despite these similarities, though, my gut reaction to “revenge” is more negative than how I feel towards “avenge.” So I applied the same statistical methodology to movies and their treatment of “revenge” to test this theory out: 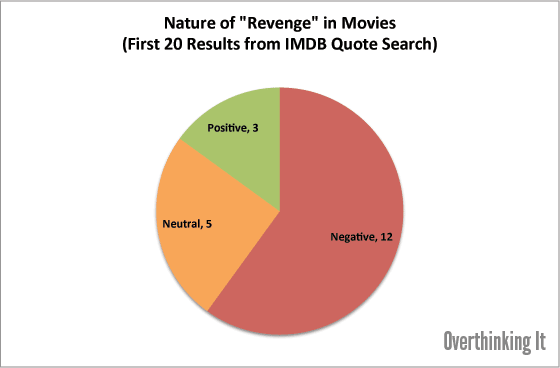 (Same caveat with regards to my P/N/N classifications apply. Let me know of any corrections in the comments.)

This did meet my expectations: “revenge” is much more consistently portrayed as a negative thing compared to “avenge.” Granted, the sample size is small, but given the prominence of these movies and the IMDB Quote Search algorithm that purports to return “popular” quotes first, I think we can at least use this as a starting point for the conversation:

Share your answers to these questions, or anything else related to the word “avenge,” in the comments!