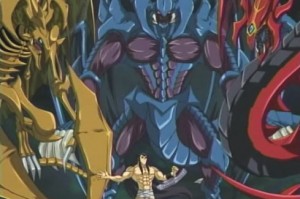 My favorite Wikipedia page has always been whatever page talks about the Winged Dragon of Ra, a specific Yu-Gi-Oh! card that wasn’t actually a card you could play in the card game for a long time, but which featured heavily in the latter half of one of the seasons of the children’s cartoon, which I watched and enjoyed in my early-mid 20s (DEAL WITH IT).

Anyway, as Wikipedia has become more systematized and organized (and, one could argue, more lame), they pared down the Winged Dragon of Ra’s coverage, lumping it in with the other Egyptian God Cards (Slifer the Sky Dragon and Obelisk the Tormentor — btw, “sky dragon” and “winged dragon” seem redundant), because, hey, let’s be reasonable and not give entire Wikipedia pages over to things as trivial as just one Egyptian God Card in Yu-Gi-Oh! Triple that shit up!

The article relies on references to primary sources or sources affiliated with the subject, rather than references from independent authors and third-party publications.

This note is in a big box at the top of the article, dated December 2010. And yet, at no point in the last year and a half, despite this clear and ever-present warning, has anybody gone to the trouble of finding information on the history of the Egyptian God Cards from sources other than Yu-Gi-Oh! itself. What is the real story? Where are the dissenting opinions? The secret history? I for one think drawing all the information you have about the Egyptian God Cards from the card game in which they are published and the television show in which they appear is really irresponsible. I hope they correct this and find some more reliable third-party sourcing in the future.

When is Big Yu-Gi-Oh! going to get out of the classroom?

The introduction of the article needs to be rewritten to comply with Wikipedia’s lead section guidelines.

This note was made in April 2011, and still no action in the last year. The lead section guidelines are fairly expansive, and the intro to this article is, frankly, a bit of a mess. But let’s look at the specific guidelines:

“The lead should be able to stand alone as a concise overview. It should define the topic, establish context, explain why the topic is interesting or notable, and summarize the most important points—including any prominent controversies. The emphasis given to material in the lead should roughly reflect its importance to the topic, according to reliable, published sources, and the notability of the article’s subject is usually established in the first few sentences. Significant information should not appear in the lead if it is not covered in the remainder of the article.”

It is true that the article fails to explain why the Egyptian God Cards might be interesting or notable to somebody outside of Yu-Gi-Oh!, and it does very little to cover the many prominent controversies over the cards, which are apparently about on par in importance with the Israeli-Palestinian Conflict.

And yes, there is a severe shortage of reliable, published sources, and a general failure to establish notability.

So get on that people! You’ve had a year! What’s keeping you?

The seizure of the Winged Dragon of Ra and Slifer the Sky Dragon by antagonist Marik Ishtar, along with the acquisition of Obelisk the Tormentor by his sister Ishizu Ishtar in the 52nd episode of Yu-Gi-Oh! requires additional citation.

The author has dutifully cited the aforementioned 52nd episode of Yu-Gi-Oh! as proof of his assertion that these events did in fact happen in the 52nd episode of Yu-Gi-Oh!, but I understand that this is pretty irresponsible and insufficiently researched. He should have gone to other primary sources from the time period and found other descriptions from independent journalists and historians of the actions of fictional Yu-Gi-Oh! antagonist Marik Ishtar.

The scan of Slifer the Sky Dragon in the article is not public domain and may not be protected by Fair Use.

This debate is more involved, and you only get to it if you click on the Slifer the Sky Dragon image. Apparently, there is unsettled case law at issue – it is “generally believed” that low-resolution images of cards from card games can be used as illustration under fair use, but that the copyright is held by Konami (the game publisher), and they could withdraw permission to keep it up there at any time.

The image page includes a four-point argument in favor of the fair use rights of Wikipedia to use this image to illustrate the Egyptian God Card article, along with three paragraphs on the potential controversy surrounding its presence.

We can only hope and pray that Konami show it mercy. And that Wikipedians go forth and correct all these grevious errors.

Or read more from… Featured, TV, underthinking it, wikipedia, Yu-Gi-Oh!

One Comment on “Underthinking It: Stuff Wrong with the Wikipedia Article about the Yu-Gi-Oh! Egyptian God Cards”