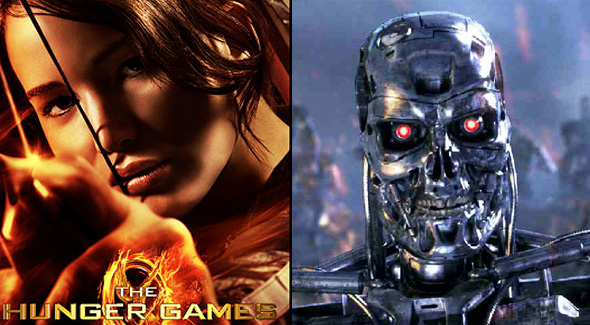 The last thing I remember before losing consciousness was Gale shoving me into a field of searing white light and yelling “No fate but what we make, Katniss!” as he did so. As I regain consciousness, I gather my thoughts. Gale and I hadn’t spoken for years. He moved to District 2 after the war, and I had returned to District 12 to start a new life with Peeta. We rarely kept in touch. Which is why I was so surprised to see him right before he knocked me unconscious, and again when I came to, right before he sent me through the…

…the what? Some sort of portal to another place? I’m not in District 12 anymore. My familiar trees and hills are nowhere to be seen. I’m in a dark alley, surrounded by tall buildings. It reminds me of a dirtier version of The Capitol. I shudder at the memories of my terrible experiences in The Capitol. A wind picks up and blows a large piece of paper to my feet. Los Angeles Times, it says. Los Angeles? Was that the ancient name of one of the Districts? May 12, 1984. 1984? My mind reels. I recognize this as the system of dates used by the ancients.

Gale has sent me back in time.

I look again at the Los Angeles Times and find my answer. I see a vaguely familiar face under the words “UCLA Professor to Receive Prestigious Computer Science Award.” My mind reels again when I read the words under the picture. “Professor Robert Snow.”

I am looking at the face of an ancestor of President Snow.

Gale has sent me back in time to kill President Snow.

Before he’s even born.

Now clothed, and armed with a bow and arrow (tucked away underneath my coat), I run through my plan for what must be the hundredth time. Professor Snow is speaking at Boelter Hall at the University of California Los Angeles. When I see him, I will kill him and save my loved ones–and my future self–from so much pain and suffering.

I sneak into the back of Boelter Hall. My blood turns to ice as I look upon Snow at the podium. I had spared him once, but I won’t show such mercy to his ancestor. I know this makes no sense. I don’t care.

Snow’s voice is at once familiar, yet alien. “…I’m so grateful that my research on artificial intelligence and cybersecurity is finally being recognized. But this is only the beginning. As Cyberdyne Systems and other companies make significant advances in autonomous computer software, our field needs to continue this vital work of guaranteeing human control and safety fallbacks for any such software that interfaces with mission critical systems. The work will be difficult. We face significant industry opposition. But the odds, I believe, are in our favor.”

“The odds are NOT in your favor!” I roar as I pull an arrow back and let it fly. Snow screams as pandemonium breaks out in the crowd. I rush to the stage to make sure he’s dead. The arrow had pierced his heart, but there is still life in his breath.

“Hasta la vista, baby,” I say, as I drive a knife through his heart. I don’t know why I say these words. I’ve never heard or spoken them before. But in the moment, they are the only words that come to mind.

I look up from Snow’s corpse and see uniformed guards enter the room. I know they are here to kill me. Before they do, I whisper to myself, “Gail…Peeta…I’ll be back.”

2 Comments on “Underthinking It: My Hunger Games – Terminator Crossover Fanfic”