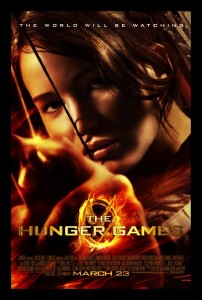 It’s no use pretending there’s anything else going on. Let the The Hunger Games games Begin!

She commands the screen with effortless magnetism, a noble innocent who is gorgeous but not quite sexy, simultaneously a tomboy and a princess. As I saw clearly for the first time, the character is clearly meant to invoke Artemis, the Greek goddess of the hunt.

The movie itself? Generally good—respectable scores on Rotten Tomatoes and Metacritic—but not nearly so glowing. O’Hehir calls it “A lightweight twi-pocalypse”, citing the decision to soft-pedal the brutality (violent and political) that permeated the book—probably both for a PG-13 rating and so that the adaptation could amp up the love twi-angle (forgive me) between Katniss, Gale, and Peeta. We’ll have more to say about this on the site next week.

There’s another, subtler, charge being leveled at the movie: The books amount to a critique of manipulation, whether fueled by politics or the media, as well as of the kind of panem et circenses spectacle from which the Suzanne Collins’s fictional, post-apocalyptic country takes its name. And now here they are, rendered in a bombastic, manipulative spectacle. Ironic, unfortunate, or strangely apropos?

Make sure to notify everyone of spoilers, but otherwise the only rule is not to eat your fellow tributes when you kill them. Let the Comment Games begin in this, your… Open Thread.