Quantum physics is full of strange conclusions, demonstrated by the “double slit experiment.” In it, you set up a screen with two narrow slits and a light sensitive detector on the other side. When you shine a light on the screen, you get a distinctive interference pattern on the other side. 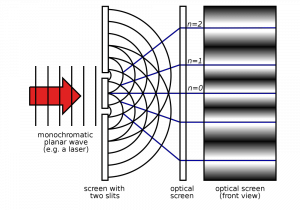 The conclusion is that light is a wave, cancelling itself out in some places and reinforcing itself in others. The strange part is that you get the same interference even when the light is so dim that only a single photon is released at a time—implying that the single photon passing through a single slit is somehow interfering with itself on the other side. The mathematical explanation of the result is (relatively) straightforward, but physicists have been deeply divided on what the strange results really “mean” in a deeper sense.

The many-worlds interpretation, on the other hand, argues that the interference is really caused by the interaction two different universes. In one universe, the particle passes to the right; in another, it passes to the left. Because those two universes are so close together, they can influence each other, and we observe the interference pattern. The implication of this argument is that the universe is constantly splitting at every conceivable point—that we exist in a multiverse where there is a universe corresponding to every conceivable configuration of quantum states.

Combining the many-worlds interpretation with a theory of quantum mind is known as the “many minds” theory, and it implies that our mind is really the result of many different minds spanning multiple universes interacting and interfering with one another. In Inception, the subconscious, dreaming mind, could be open to leakage these other universes—Cobb compares the dreaming and creative process to “discovering” new worlds. Viewed through the lens of the quantum mind and the many-worlds interpretation, that’s exactly what is happening: when you dream, your mind is open to all of the senses and experiences of another world, exploring another universe for the night.

This means dreams are not just the product of random neurons firing while you sleep. Rather, they are fragments of real experiences from counterpart minds throughout the multiverse. The people you meet and places you go in a dream are as real in their own universe as you are in your own; you’re just experiencing a tiny snippet of that reality. This provides a solution to the dilemma of exponential communication between minds in the shared dreams of Inception. The communication doesn’t have to take place entirely within just one universe, so it’s not restricted to the tiny IV line connecting the participants. 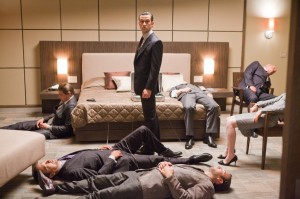 When Cobb tells Saito that they have become “Old men, filled with regret,” the machine doesn’t have to somehow compress and speed up Cobb’s words 160,000 times and send them across an IV line- the two minds are already experiencing the same universe, talking to each other through the air just like in ours. Seen in this light, the shared dream is a feat of navigation, not computation—the dream machine only has to transfer enough information to keep the dreamers “moving” between universes together, ensuring that their minds are open to the same location in the multiverse.

This explanation accounts for several differences between the shared dream of Inception and the natural dreams we experience at night. Natural dreams are erratic jumbles of experience, constantly skipping from place to place. In a natural dream, you are exploring the multiverse by yourself, so there’s nothing preventing random jumps from universe to universe. In a shared dream, though, there are multiple participants, holding each other back from constant changes in perspective. All the participants have to travel in lockstep, so the dreams are more stable from moment to moment. Ariadne asks how you can create a world so detailed that it feels real, arguing there’s no way you could keep all the textures, tastes and sound in your head. Given a multiverse, though, the universe they experience can be fully realized, with the texture of the universe filling itself in automatically.

When you dream at night, you only experience what’s right in front of you. In the shared dream, on the other hand, the projections of Fisher’s subconscious persist, fighting and dying even when Fisher is asleep in another room, experiencing a whole other world. Because the shared dream is rooted in the multiverse, his subconscious mind doesn’t have to constantly check up on and control dozens of projections, driving snow mobiles and shooting guns at people in hotels. Instead, Fisher’s subconscious navigates the group to a universe in which his projections already exist. Once there, the projections act on their own without constant supervision from Fisher’s brain. All of the people and places in the dream exist and persist naturally, without any additional computational demands on the dreamer.

The characters never mention the multiverse or quantum mechanics. It’s likely that they don’t know how the machine works. And for good reason: the machine was built by the military so soldiers could learn how to kill by stabbing and shooting each other. The implication of the quantum theory of mind and the multiverse is that the people you meet—and kill—in the shared dream are every bit as real in their universe as we are in ours. The inner workings of the machine would be the most closely held military secret, for fear of soldiers balking at killing their fellow soldiers, even in another dimension.

The existence of a machine with the capabilities shown in Inception would act as proof of the “many minds” theory, which could have profound philosophical implications. The many-minds theory has always been closely tied to the theory of quantum immortality, which argues that from an internal perspective, death is impossible. If your consciousness has access to the entire array of universes containing it, there will always be at least one universe in which you’ve beaten the odds and survived. Your consciousness is bound at every “branching” of the universe to follow a path that avoids death.

Imagine placing yourself into a chamber, with a device that takes a quantum measurement every few seconds. If the spin of the proton is up, you die – if the spin of proton is down, you live. Regardless of how many times the experiment is run, there is at least one universe where you are still alive, where every measurement has been of a “down” proton—from your internal perspective, your consciousness can only exist in “down spin” universes. Inception’s director, Christopher Nolan, has played with this idea before, and even constructed a “quantum suicide” device in The Prestige: Hugh Jackman’s character never knows if he’s going to be “the man in the box,” but there will always be at least one version of The Great Danton alive at the end of the Transported Man.

Note, however, that the perception of immortality only exists for the individual. You can’t experience your own death because your consciousness can only exist in a universe where you’ve survived. From an outsider’s perspective, however, there’s still a 50-50 chance of existing in an “up-spin” universe where you die. This explains the bizarre nature of death in the shared dreams of Inception. When a character “dies” in the shared dream, they cease to exist in the universe the rest of the participants are experiencing, but the sedative prevents them from waking and returning to their original universe. Having lost the tether to their “real” universe, they slip into the “raw, infinite subconscious” of limbo, navigating freely through the multiverse, “creating” or “discovering” the world as they go- but in doing so, losing the anchor that allows them to wake and return to their original universe.

Mal is consumed with the idea that her world is not her own, with the question “What if your world is not real?” In the Matrix, where the dream-world is the construct of a computer simulation, this question is all important. The good guys all choose the “red pill“ of reality. Even though the real world of Zion is a bleak, hopeless hell-scape of constant warfare, there’s little doubt that we’re meant to prefer it because it’s “real.” Only the cowardly Cypher prefers the ignorance of life in the Matrix, lured by the promise of all the steak he can eat.

Mal is willing to risk death to get to the “real universe”—her leap of faith is Inception’s version of the red pill. But in the world of Inception, to share a dream is to share a universe; the dream is just another location in the multiverse, every bit as real as our own. In Cobb’s final confrontation with Mal, she tries to convince him that he doesn’t really believe “in one reality anymore.” When the credits roll and Cobb’s totem is still spinning, he has already turned away, gone to greet his children. Faced with the fact that the dream universe can be every bit as real as our own, he’s decided that it doesn’t really matter whether or not the top stops spinning. He’s finally arrived in a universe where he can come home to his children.

Ben Adams is a Naval Officer living in Southern California who should probably be using his time more effectively. When he’s not driving warships or fighting pirates, he maintains his own blog, Think Like a Fox.

Episode 654: He is Very Obvioulsy an Evil Wizard