[Hey, Overthinkers! Enjoy this guest post by Will O’Connor! – Ed.]

Within Comic fan circles, Peter Parker has a certain reputation for comedic misery. Despite his fantastic features and abilities, the stench of failure and defeat surrounds him. For all the bright colors of his costume, and for all his comedic quips, he is arguably an outright depressing character. At the very least, his life can only be described as the product of a shockingly pessimistic vision. His situation is forever declining; circumstances are forever becoming considerably worse. Peter Parker’s various tragedies all have a rather simple explanation. Spider-Man is essentially a Cautionary Tale masquerading as a superhero adventure story.

I don’t mean to suggest that the comic hero is intended as a warning against radioactive spider bites. I intend to argue that Spider-Man owes a considerable debt to a literary genre that flourished in the nineteenth century, a genre Maria Tatar, a Professor at Harvard University, refers to as the ‘Cautionary Tale.’ Cautionary Tales were dedicated to controlling children’s behavior. In Cautionary Tales child characters would often be disproportionally punished for seemingly petty faults. In one such tale, a child had both of his thumbs forcibly removed because he sucked his thumbs against his mother’s wishes and demands. 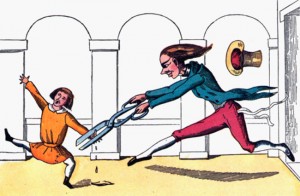 These were stories that placed their emphasis on socialization rather than self-aggrandizement. Indeed, in Cautionary Tales, all forms of self-aggrandizement tended to carry the ultimate punishment. Vanity and mere childish were repaid with disfigurement, death, and all the tortures hell had to offer. These stories implicitly and explicitly argued that the needs of society, and parental demands, were considered far more important that the individual hopes and dreams of children. These were stories that in the words of Maria Tatar, ‘encouraged docility.’ The child was not supposed to actively pursue his or her own desires, or even his or her own needs. Indeed, in Cautionary Tales, the active child was a sinful child. They were a product of the ‘seen and not heard’ era of childrearing.

It is this nineteenth century literary genre that best explains the structural reasons for Peter Parker’s misery. Strive as he might, Peter Parker can never escape the unfortunate reality that he is living in a Cautionary Tale. The similarity between Spider-Man and the Cautionary Tale genre is obvious from the initial Spider-Man story, and from the first tragedy in Peter Parker’s life to which his stories bear direct witness.

Spider-Man’s earliest failure is closely tied in with an implicit condemnation of self-aggrandizement and vanity. As far as the earliest Spider-Man story was concerned, Uncle Ben was not the victim of a homicidal thief. Rather, Ben Parker was the victim of his own nephew’s vanity. That statement probably sounds a bit glib without further explanation, so let’s look a little bit more carefully at the death of Ben Parker, since it’s arguably the first time we see Peter Parker’s situation noticeably deteriorate.

Before the infamous encounter with a thief, Peter Parker, or at least his alter ego, has become something of a celebrity. He’s on television; he’s an ‘overnight sensation.’ Unfortunately for Parker, he lets his fame go to his head. He refuses to block the progress of a thief, saying ‘From now on I just look after number one – that means me.’ The line is dripping with vanity and narcissism. He insists that he is only going to look after his own interests. Implicitly, Peter’s statement, along with his refusal to help a police officer, is nothing less than a declaration that his wants matter more than the needs of society. The following events follow the cruel logic at the heart of many a Cautionary Tale. Ben Parker is shot to death by the very robber Peter Parker refused to stop. 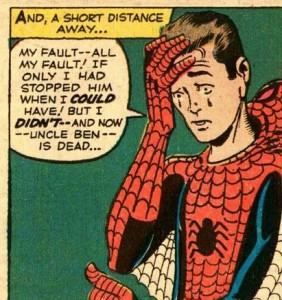 Now why on earth, aside from mere narrative convenience, would that happen? There’s no obvious reason the robber and Peter’s Uncle ever have to see each other. Remember, this is not taking place in some small hamlet where everyone runs into everyone else eventually. Spider-Man takes place, like essentially every other story published by Marvel Comics, in New York City. To say that New York City has a remarkably high population is a ludicrous understatement. The odds of the thief and Ben Parker ever running into each other are infinitesimal.

The death of Ben Parker is not a natural outcome of the thief’s escape; his murder is the inevitable result of Peter’s vanity. Peter announces his intention to focus on self-aggrandizement, and his Uncle is shot to death. Peter then learns that he ought not to use his abilities for his own promotion, and that the welfare of others matters more than his own sense of pride. The lesson of the story is obvious; vanity and self-aggrandizement have disastrous consequences.

Considering the circumstances, the death of Ben Parker fits nicely within the absurdly disproportionate punishment tradition. Peter Parker let fame go to his head a little and passively disobeyed an authority figure. Instead of any natural outcome, the result of this is the death of Peter’s surrogate father. Ideologically and structurally, the very first Spider-Man story is a Cautionary Tale. Vanity receives a vicarious death penalty.

The other tragedies in Spider-Man’s life continue to follow the pattern established by the death of Uncle Ben. Gwen Stacy’s death too is a product of the Cautionary Tale ideology. In Cautionary Tales, characters were never to be allowed personal happiness in this world, unless they were serving the needs of society. The puritanical ethic that inspired these stories condemned happiness in the present world. Therefore, Peter Parker cannot be granted any respite so long as he lives. 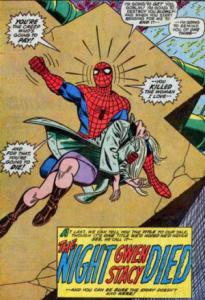 The writers behind the death of Gwen Stacy admitted that her end was a reaction to a disturbing possibility: Peter Parker might soon become happily married. In other words, Peter might soon find happiness in the here and now. In turn, this newfound happiness could conceivably lead to Parker once again focusing his attention of his own needs rather than the needs of society. In Cautionary Tales, the focus is forever on the demands of the social order, never on the personal happiness of the individual. Because she represented an opportunity for such personal satisfaction, Gwen Stacy was killed by the writer’s cruel edict.

Presumably, the reasoning behind Gwen Stacy’s death also explains the end of Peter Parker’s subsequent marriage to Mary Jane Watson. Notably, that marriage was not merely ended, it was erased from history. The writers could easily have ended the marriage any way they saw fit, and yet they chose to create a scenario in which the marriage was prevented from ever having happened. In other words, the writers were not reacting to a perceived lack of viability in the marriage as it then stood; they were operating under the belief that it had always been a mistake.

Marriage then, no matter who the wife might be, represents an opportunity for happiness in the here and now. The ideology that pervades Spider-Man can never allow such happiness. And therefore, Peter Parker cannot be allowed a perpetual bride.

Another alleged reason for the writer’s hostility to the mere possibility of marriage is the possibility that marriage means maturity, and maturity hurts Peter Parker’s characterization. In this view, Parker is best treated like a kind of modern Peter Pan; he cannot be allowed to grow up. But this apparent obsession with youth does not explicitly contradict the argument that he is living within a Cautionary Tale. In fact, the desire to keep Peter Parker young is inextricably linked to the connection between Spider-Man and the Cautionary Tale. Cautionary Tales were not concerned with the faults and failings of the adult world; they were largely concerned with children’s behavior. If Peter Parker is never allowed to age into true adulthood, he remains in a sense a perpetual child, and therefore he remains subject to the strict morality of the Cautionary Tale. 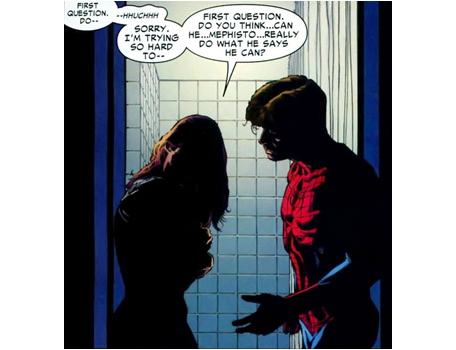 Peter Parker is famous for being the first true teenage superhero, and perhaps that is where the connection between his story and the Cautionary Tale originated. After all, in the eyes of contemporary American society, a teenager is emphatically not an adult, and therefore from the perspective of a Cautionary Tale, Peter Parker began his career in childhood. Because Peter Parker is youthful, his story remains a collection of Cautionary Tales, and due to that sad reality, he continues to suffer a life that is continually in decline.

The first Spider-Man story was structurally a Cautionary Tale. Peter Parker became vain, and that vanity resulted in the death of his Uncle. The ideology apparent in the first Spider-Man story continued to harm Peter Parker’s prospects in subsequent stories. Cautionary Tales did not restrain themselves to condemning self-aggrandizement; they tended to treat happiness in this world as a sin. Pleasure was Heaven’s to award and to seek it in this life was an affront to the religious sensibility implicit in Cautionary Tales. Therefore, Peter Parker can never be allowed continued happiness. For Peter Parker, pleasure is forever deferred.

[Whaddaya think, True Believers? Is Peter Parker’s story a menacing moral for troubled teens? Or is this just the sort of bad luck you’d expect a man bitten by radioactive spiders to suffer? Sound off in the comments! – Ed.] 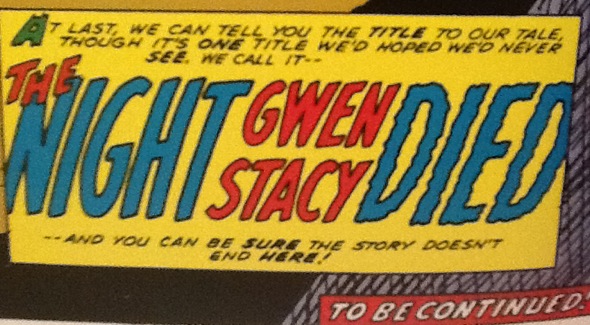 A recent graduate of the College of Wooster, Will O’Connor’s last great work was a 102 page paper on the ideological evolution of fairy tales from the Brothers Grimm to Mighty Morphin Power Rangers.

4 Comments on “The Cautionary Tale of Spider-Man”