It’s that time of the year, folks: that time when we subject the Oscar acceptance speeches to a level of statistical scrutiny they definitely don’t deserve. Ladies and Gentlemen, the 3rd Annual OTI Oscar Acceptance Speech Word Cloud: 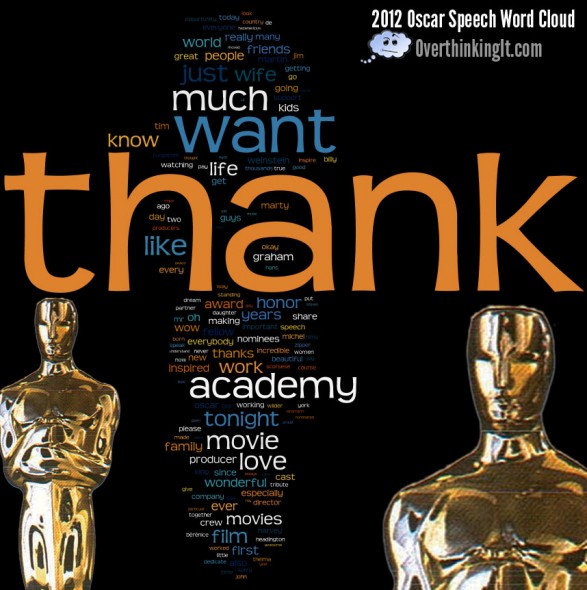 Since the 2010 ceremony, I’ve aggregated the text of all the speeches, generated a word cloud like the one you see above, and performed some rudimentary statistical analysis on things like the average number of words per speech. This year, though, I’m kicking things up a notch with Excel charts and graphs that show how these numbers have changed over the last three ceremonies. Because that’s the only way I can remain interested in this annual self-congratulatory snooze-fest of an awards show.

But I digress. On to the graphs!

After a significant increase in wordiness on a per-speech basis from 2010 to 2011, the wordiness of the speeches has dropped below that of 2010.

(Note: these numbers differ from what was used in previous editions of this analysis. I’ve switched to a more reliable text analyzing tool and normalized the results using that instead of going back to the old numbers.) 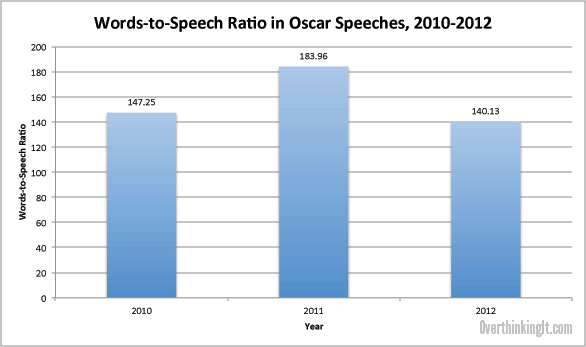 Although given how many Oscars The Artist took home, I expected that number to be much lower.

As with 2010 and 2011, “thank” was the by far the most commonly used word. In 2012, we see a clear indicator that the trend of thanking in Oscar speeches is increasing. 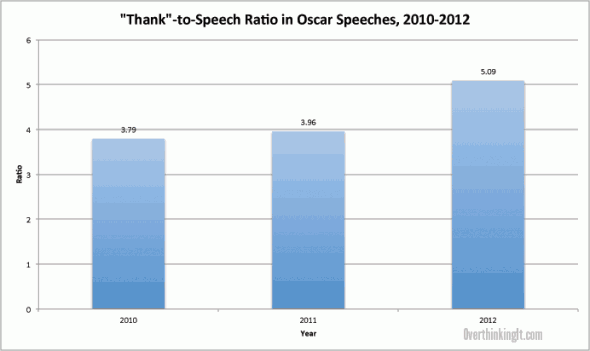 At this rate, by the year 2030, Oscar speeches will solely consist of the word “thank” repeated over and over again. I, for one, thankfully and fully embrace this future trend of thankiness, and I thankfully expect Overthinking It articles to gradually increase their use of the word “thank” going forward to match this trend. (Note to self: purchase domain OverthankingIt.com and squat on it until it becomes SOLID GOLD.)

The Academy is one of the most common targets of thanks, not surprising given that they’re both the selectors of the winners as well as the winners’ colleagues. 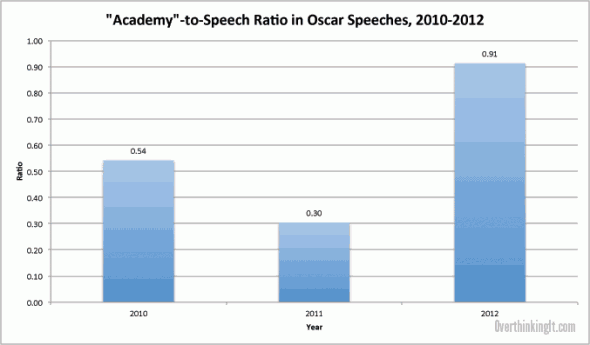 But what could explain this recent spike in giving thanks to the Academy? Is it a Scientology thing? Did Scientologists recently increase their numbers in the ranks of the Academy and among Oscar winners, and this is their way of secretly acknowledging their new religious bonds? It must be a Scientology thing.

Whatever the reason for increased thanks to the Academy, God remains insanely jealous. For each of the last 3 ceremonies, The Great Producer in the Sky was only mentioned 3 times, typically in the form of “Oh my God,” and never thanked. Not once. 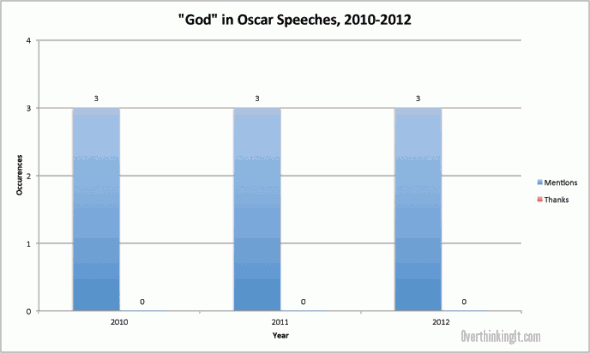 No surprise here: as was the case in previous years, wives get (almost) all the shout outs. 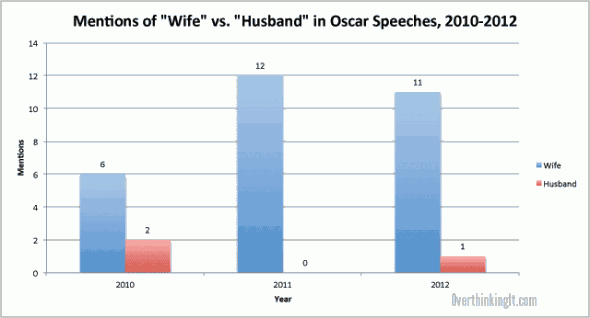 My sources tell me it’s not because women are so much better than men at supporting a spouse in the film industry and are therefore more deserving of thanks; it’s because most of the winners are straight men who happen to have wives, regardless of how much they deserve it.

Putting snark aside for this last entry: I was actually surprised by the sudden turn towards “movie” or “movies” instead of “film” or “films” as the preferred way to refer to motion pictures, given the Academy’s continuing habit of taking a high-brow approach to nominations that prefers “films” like The Tree of Life instead of “movies” like Bridesmaids. 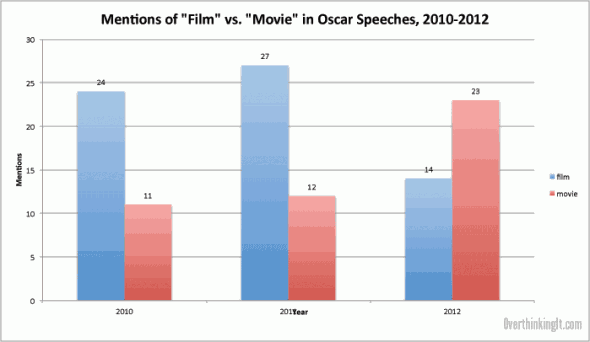 I can’t come up with a serious explanation for this change, but I can remind us of the reality of the distinction between “film” and “movie” in our culture. According to Google Trends, searches for “movie” outpace searches for “film” by a huge margin in the United States:

But, interestingly, that margin is slightly smaller in cultural capitals New York and California, where high-brow types are more likely to reside: 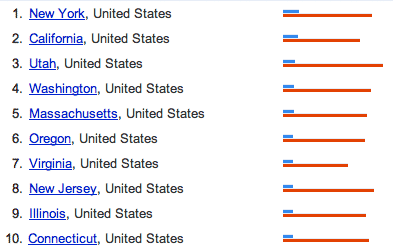 Any theories as to why Oscar winners were so much more likely to refer to “movies” instead of “films” this year? Is there any chance a Tim Tebow will come to Hollywood and thank the crap out of God at next year’s ceremony? Is there a correlation between the GDP of Greece and any of these indicators? If so, let me know your crackpot, or not-so-crackpot theories in the comments!

Updated 2012-02-29: stripped-down text of the speeches (without speaker identifiers) is available here if you want to do your own analysis. Also, mistake in count of “husband” in 2011 was corrected.