Hey, Overthinkers. I know I’m a little late with the Open Thread this week. (To tell the truth, not everyone here at the OTI-dome is convinced we need Open Threads now that we have the forums, but I’m not sure they need to go the way of the vinyl album just yet. What do you think? It’s your Open Thread, after all…

Of course, the big pop culture news this week is the return of Cougar Town!!! 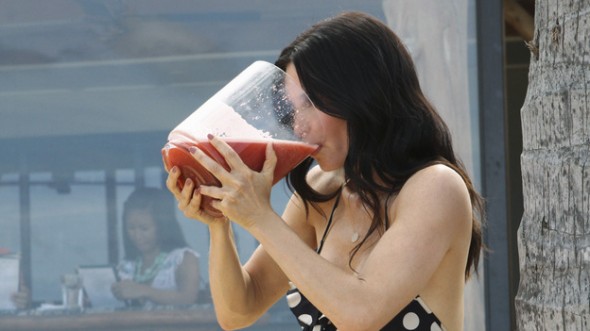 OK, kidding. Sort of. I’ve watched it, and—though I don’t want to sound like Abed here—it’s a pretty consistently funny satyrical dysfunctional family sitcom. Search your memory: Can you think of as decent a show that had as terrible a name? Leave it in the comments, because I’d like to hear it.

At the box office, this week’s new releases continue the 2012 trend of containing at least one movie I have heard nothing about. I guess I’m not really in the demo for The Secret World of Arrietty, so it’s not as shocking as when I knew nothing about The Grey, but still, maybe I’m getting old, because I used to feel better informed. Rounding out the weekend we have Ghost Rider 2 and action/spy/romantic comedy This Means War.

Are you watching any of the mid-season replacements? Can you explain to me what the hell an “Arrietty” is, and why I’d want to understand one’s secret world? Sound of on this, or any other, topic, for this is your… Open Thread.