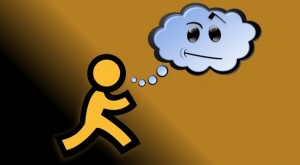 What is AOL trying to say there, exactly? It seems like “You have mail!” would be more proper, but that’s not what they chose.

Fenzel
It’s attempting to be deliberately conversational and casual, to get people comfortable with using email, which at the time was a weird, alien thing for a lot of folks. It also helps counteract the perception that AOL is/what a soulless online leviathan in search of world domination—nope, just a friendly dude!

It’s the idea brought to fulfillment recently by some politicians who will remain nameless: if you talk like you’re dumber than you are, people will identify with you more and be slower to realize you’re a tyrant.

Wrather
I think that also, rhetorically, the little twinge of impropriety you hear in “You’ve Got Mail!” probably indicates that the speaker is excited about your having mail. When people are really exercised about something, they don’t speak so good (“We was robbed!”) — and indeed, if you listen to the original recording, the guy sounds pretty happy for you. Surprised and overjoyed, in fact.

The rhetorical term for a mistaken or deliberate grammatical substitution is “enallage” — actually, “We was robbed!” (substituting the singular verb for a correct plural verb) is a great example. And aside from conveying emotion, the enallage makes the usage more memorable.

Stokes
It really should be “You got mail” or “You’ve gotten mail,” right? It’s a little weird to announce an event (an email arriving in your mailbox) by describing an ongoing condition. Unless you delete all your old messages, mail continues to be a thing that you have (or have got) in perpetuity. Imagine the AOL guy saying “You’ve got two children,” and think about how weird it seems.

Okay, now Wiktionary is telling me that, although an American that wanted to use “get” in the past perfect would say “you’ve gotten mail,” in UK English “you’ve got mail” would be proper. How Un-American, Online!