An unruly mob living in tents, regularly forced to relocate, demanding respect from corrupt elites, beaten and sometimes killed by the de facto authorities. Until we get a closer look at the style of tents or the way they dress, we could be watching a scene in Zucotti Park, Tahrir Square, or the latest original show on AMC, Hell on Wheels. Mark my words, lives will be lost, and pepper will get in someone’s eyes.

AMC couldn’t have picked a better time to air a show about desperate people working killer industrial jobs for “The One Percent.” When conservative pundits write off Occupy Wall Street protesters as hypocrites for owning iPhones or other brand-name gadgets, Hell on Wheels is the show that should be running on those devices to keep them motivated. 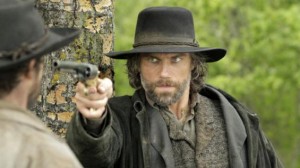 At first glance, the show fits the typical Western formula: our anti-hero Cullen Bohannon wants revenge on men who murdered his wife. But much of what we see is his day job with the railroad, taken as a cover so he can get close to the murderers. Like most of us (somewhat less than 99%?), he sells his labor to get by, but he’s alienated from the product and the profits. It’s a day job which he barely maintains, sometimes shirking his work duties in pursuit of a man who needs killing. As a bonus for viewers who hate crappy jobs and crappy bosses, we follow Bohannon as he attempts to murder his immediate superior in the first episode. Another disgruntled worker beats him to it. Later we get to see a worker take down his boss in a bare-knuckle boxing match.

Lily Bell almost gets killed with her surveyor husband because of an unsafe work environment, or you could call it a failure to clear their development plan with disgruntled local residents (the Cheyenne). She spends a few episodes letting her late husband’s employer dangle before she hits him up for workers’ compensation pay for the death of her husband, using his precious survey maps as leverage.

Other working stiffs on the show include several ladies of negotiable virtue and some Irish brothers in the Magic Lantern entertainment industry, already making forays into pornography. They may be independent operators, but presumably all of them have to pay protection to madams, pimps or local bosses like the Swede. There’s a young man facing the dilemma that many of us have with jobs, whether to follow the traditions of his family (become chief like your father, defend against invading white men) or his chosen career path in the church.

The reason 99% of these people are sweating and straining in the mud is that Thomas Durant and a few faceless investors stand to profit from it. He’s our Wall Street whipping boy. An abridged list of Durant’s crimes or dick moves on the show include demanding his men keep working when payroll is two weeks late, bilking the government, extorting and bribing a senator, embezzling, and pushing extra arrows into a dead employee so it will look like a more brutal massacre in news photos. Although his second in command The Swede believes Bohannon committed murder, Durant effectively pardons him, not because he considered the merits of the case, but because building the railroad is more important to him than justice.

If Durant hasn’t demonstrated every transgression the Occupy movement attributes to Wall Street, he probably did it off-screen or hasn’t got around to it yet. 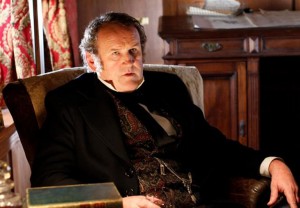 Hell on Wheels doesn’t show protests in forms familiar to a modern audience, but it’s a history of the One Percent giving the 99% good reasons to protest. Only a few of these characters behave in ways that you’d confuse with protesting. Reverend Cole’s message of nonviolence and morality makes him sound like a modern activist, but he doesn’t focus on the morality of economics like Occupiers do. He’d be content if all the workers got baptized, quit their whoring and drinking, and peacefully continued building Durant’s railroad through Indian Country. Ferguson might be the closest thing to an activist on the show, constantly pushing for more rights, becoming apparently the first Black “walking boss” in the company, brazenly attempting to desegregate the whore house, and walking off the job when payroll is delayed.

The other character who would fit perfectly into an Occupy encampment is Bohannon. In some episodes, he’d be the cop telling protesters to unlink their arms, pick up their junk and clear out. Like the modern enforcers for Wall Street, Bohannon doesn’t share the massive wealth of Durant or the One-Percent, but he’s compensated by them for keeping workers in line. He’s willing to get down in the dirt and wrestle with Ferguson to stop even one person from striking.

In other ways, Bohannon seems to have a lot in common with Occupiers. He has legitimate grievances like they do. His wife was killed and probably raped by Yankees, who also burned down his barn with his son and the freed slave who raised him hiding inside. Bohannon knows he won’t get justice by working through the Yankees’ system. Like Occupiers, he faces a monolithic, entrenched enemy that stands in the way of his goal. Unlike the Occupiers, he might be able to get a taste of justice without directly confronting the system.

I don’t know exactly what the Native American storyline has to do with Occupation, or marginalized people pushing back against an overreaching ruling class. Okay, maybe they’re a little related. The Cheyenne don’t seem to include non-violent direct action in their repertoire of protest tactics, so they’re different in that way. Like the protesters, their chances of unbalancing the One-Percent seem slim, but they will probably do some damage before the dust settles.

Enough with the similarities. What lessons does HoW have for #OWS? 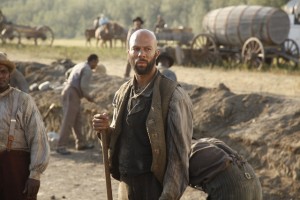 First, contrary to what Bohannon advises the freedman Elam Ferguson, don’t forget your past. You probably won’t be able to anyway. Go ahead and dwell on it. If you’ve been treated like property or three-fifths of a human all your life, use that to fuel your fight with the system. Ferguson and Bohannon bring a lot of pain down on their own heads while trying to get justice, because they can’t forget their past. But so far they’re making progress toward their goals.

More importantly, Occupiers can learn from Hell on Wheels that violence gets results. Reverend Cole tries to head off violence with negotiation, but he’s only delaying the confrontation. Bohannon resorts to violence in the very first scene of the series, and plenty of situations along the way. So far it’s helped him get information, rescue Mrs. Bell and get revenge on a few killers. It didn’t get the results he wanted in the boxing match with Ferguson, but we see lots of success from Ferguson’s perspective when he resorts to violence. He gets revenge against Johnson and wins the fight against Bohannon. Without his threat to walk off the job and backing it up with a fight, he might not have been promoted to walking boss by Bohannon, and Durant wouldn’t have given ten cases of whiskey to the workers as a kind of interest on their delayed payroll. The Swede even allows freedmen into the saloon for the fight, “for one night only,” presumably the first time it has been desegregated, again thanks to Ferguson’s willingness to fight.

The one situation where aggrieved characters might not get positive results from the use of violence is when the Cheyenne eventually confront the Army. So far, their use of violent tactics has generally paid off. Maybe the lessons will change in future episodes.

The last lesson is that this historical fiction about our past could be a vision of our dystopian future. In lawless lands, before law was established in a territory, an organization like the Union Pacific took it upon themselves to act as local sheriff and executioner. They fill the gap where laws should be. Durant issues laws. The Swede and other middle-managers enforce Durant’s law. After the attempted lynching, it seems like Bohannon and Ferguson have become outlaws and fled. But there is no law in the camp, no one authorized by the government to enforce laws. They’ve violated the will of the Swede, and have to act like outlaws because the Swede acts like a lawman.

But that’s history. At some point, law was established and everything got better. Laws were written by people fairly elected, who authorized police or military or bureaucrats to enforce the laws, and it was about as good as it could get. Maybe we’re still in that heyday.

(To say that law was “established” when Whites conquered the territory assumes that the humans already living in that area had no laws of their own, or that their traditions were not cool enough to count as laws. Maybe the attacks by the Cheyenne count as enforcing their laws. Without trying to pin down a definition of “law” or looking up a history of actual Cheyenne traditions, let’s just say that not many Whites would have obeyed the laws of the Cheyenne either way, so it was lawless land as far as they were concerned)

In a fantastical future world where corporations and One-Percenters acquire more power and elections become more entangled with money, elected officials or their appointees would no longer represent the will of the people. Corporations would take over. Or they’d keep the government around as a public relations department, to convince their subjects that it’s still a democracy and everything is fair. Their arbitrary rules would lack the authority of laws created by a democracy. It would become a lawless land where plutocrats could take it upon themselves to write their own rules and appoint sociopaths like the Swede to enforce their rules.

But maybe there are some actions Occupy Wall Street could take to make sure that wacky dystopian vision of the future remains as implausible as Zardoz or Robot Holocaust.

[Does Bohannon represent the modern dilemma to either climb the social ladder or embrace one’s proletariat roots? Should these laborers be telegraphing their grievances, 160 characters at a time? Sound off in the comments! – Ed] 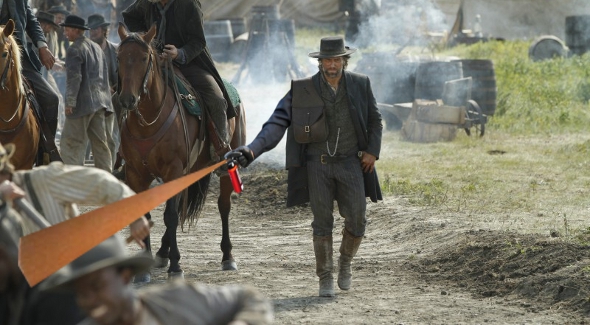 A screen test report on Rob Northrup by the serials department of Republic Pictures is reported to have read: “Can’t sing. Can’t mashup videos. Can write a little.”

3 Comments on “Hell On Workers”