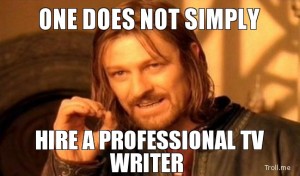 My holiday TV watching this past year, especially close to New Year’s, was dominated by two fine shows on very fine shoestrings: 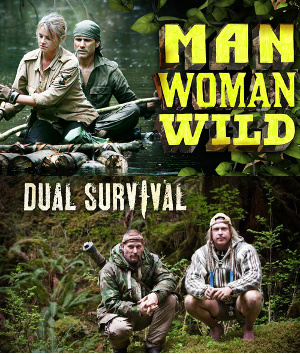 Both Man Woman Wild and Dual Survival (the one with the hilarious, over-the-top name is also the one most likely to disappoint if you tune into it cold without reading a description) are lesser scions of the Man vs. Wild and Survivorman genre, which is basically Jacques Cousteau with God Mode turned off.

However, while some of the things Bear Grylls and Les Stroud do are supposedly impressive and/or actually dangerous — and while the solitude of the predecessor shows adds an element of psychological danger — Man Woman Wild and Dual Survival land squarely in Easy Mode. The two shows are very similar, taking the casts to exotic places and demonstrating how they might be dangerous were the situation to be different than it is. This crucible of intense exposure to intense natural intense dangers then brings out the core of the relationship between the two protagonists. Or something like that.

These are not shows about survival, they are shows about relationships. And most notably, they are virtually scripted shows without actual writers. How do these genres mix, what does the telltale doubles survival scene look like, and why? Find out more after the jump, IF YOU SURVIVE — 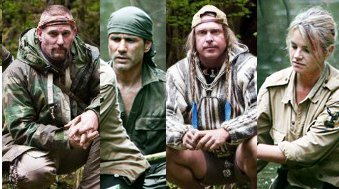 When I say these shows don’t have actual writers, I’m not being coy. Dual Survival doesn’t list any writer credits at all, and the sole writing credit for Man Woman Wild goes to creator/star Mykel Hawke Pierce. What the shows do have are line and story producers, the producer/editors (or “preditors”) who grew reality TV from its scabby roots taking hold by Writer’s Guild of America labor disputes. Watch the shows, and you can tell within minutes that, even if the specific words are not formally scripted, the stories are crafted to track specific narratives.

In Man Woman Wild, Pierce, a special forces guy I takes his English wife, the aptly named and capable Ruth England, on treks in the wilderness to teach her about survival skills. In Dual Survival, Dave Canterbury, an army Special Reaction Team leader, trainer and sniper, takes Cody Lundin, huge hippie, on treks in the wilderness to have philosophical discussions about whether or not it is a good idea to wear shoes or fight alligators.

In practice, each show is a series of sketches, which resonated with me because of their similarity to improv scenes. Watch this fairly extreme scene from Dual Survival, which is nevertheless typical of the way the show paces and structures its text, whether it is written in the strict sense or not:

Let’s unpack this scene. What is it about? What is at stake?

Well, Canterbury has deliberately cut himself in order to show the audience a cool trick involving moss and gunpowder. Lundin is assisting with the trick. We can’t really believe Canterbury is in actual danger — this is a controlled dramatization; it is not as if Canterbury has been injured by accident, or that the show is like Jackass and the actors are comfortable hospitalizing themselves in the line of work.

It might not be apparent at first from this example, because Canterbury often does act like he’s on Jackass, doing potentially fatal things for no reason that put him at risk of hospitalization or worse, but the disclaimer on the in-bump from commercial communicates otherwise:

“This program depicts a survival scenario. Due to the extreme danger, Dave and Cody receive support when they are in potentially life threatening situations, as required by health and safety regulations. On some occasions, situations are presented to Dave and Cody so they can demonstrate survival techniques.”

So, we are not watching the show to see if Canterbury or Lundin are going to die. We know that isn’t going to happen on camera. But we also know this is not a strictly educational show; there is a sense of drama to it. The survival scenarios are, in the sense of how the scenes are performed, a backdrop or starting place for the more in-depth work, which is about the relationship between the characters.

The important statements in this scene, and the statements I always latch onto in Dual Survival, particularly because of my improv training, are the “I feel” statements, where the performers come out and tell you their emotional relationship with what is happening, usually hewing to very narrow and specific character traits. Canterbury is a thrill-seeker, down-home Southern, hostile to natural dangers, and machoistic, while Lundin is cautious, timid, in need of approval, and desiring a relationship of love and mutual respect with the earth. So, yeah, a huge hippie. Let’s look at the “I feel” statements from the previous clip:

“I feel like I’m cocked and locked; I’m ready to rock. Give me a knife.”

“I want you to walk me through this.”

The emotional subtext of the scene is that Lundin is reluctant to conduct the stunt, because he is afraid of losing Canterbury’s friendship, whereas Canterbury is so stoked for the stunt that he is not considering the potential emotional consequences.

Now there is a scene! It’s certainly feasible the relationship between the two would become strained, even as it is infeasible that Canterbury is actually going to have his arm blown to pieces by the black powder. So the show tricks you into thinking it is about the survival scenario, which is somewhat staged and controlled, when really the survival scenarios present premises for scenes where the characters develop their relationships with one another.

The best scenes on Dual Survival and Man Woman Wild are like this — the performers relay their subjective emotional experience of events in such a way that it tells you about their relationship. Here’s another example — see how Lundin’s description of his feelings and philosophy contrast with Canterbury’s subjective, emotional account of getting the **** stung out of him by a swarm of bees:

Speaking from experience, scenes where characters have strong emotional points of view are much easier to improvise than scenes where the characters are relaying circumstantial information or doing something where the event itself is the focus. So, with the performers coming at each survival scenario from an emotional direction, it makes it easier to construct good scenes without a professional writer fine-tuning the words. The relationship is the goal, and you get to relationship through behavior, and you get to behavior through an emotional point of view.

Check out this scene from Man Woman Wild. One frequent structure for a scene to take is to communicate instructive survival information until the scene stalls, then make a bold declaration of how you feel about something. Ruth England does a great job of adding this humanity and subjectivity to the fairly ridiculous endeavors her overwrought, bandana’ed husband seems so steely about:

In some ways, I like Man Woman Wild more than Dual Survival — Ruth England’s commentary on how she feels in the different environments is some of the most interesting television on either show. But Mykel Hawke Pierce is an unremitting douche — the least genuine character on either show, and offensive in his adherence to gender role rhetoric. It is not a coincidence that what Pierce says is the most scripted — that he’s the only writer on either show — and that he is the least sincere and least communicative about his own point of view in scenes as well. He is, as they say, “forcing it.”

Because Canterbury and Lundin express their vulnerability and their feelings about the survival scenarios, and aren’t as dismissive in their feelings for each other as Hawke Pierce whichever his real name is about his wife, their scenes take on a more vivid life and are more interesting than Mykel Hawke Pierce’s scenes, even if Pierce’s scenes are more tightly plotted and a bit less ridiculous.

These shows have another quality that stands out among television shows today — their protagonists are old by TV standards. Ruth England is 41. Mykel Hawke Piere is 46. Dave Canterbury is 48. Cody Lundin is 44. If you pick up a book on commercial TV or screenwriting, it might tell you that if you want to tell a story about people in relationships in their 40s, transpose it to teenagers or people in their 20s without changing the gist and it will sell better. How do these shows get away with having friendships and a marriage between middle-aged adults, when shows like actual Survivor and other reality TV lean so hard on the sex appeal of the young?

From a pragmatic sense, that’s because these people are very involved in producing the shows themselves, plus they have proven track records that are important for the show, and they play to an older audience.

But I think the answer within the show — the reason it feels right rather than just the reason it happened — is in the emotional context of their survival adventures. The characters go through many extreme situations every episode, and yet their personalities and relationships stay relatively stable. There is certainly risk — we don’t want to see Cody and Dave actually be upset with each other, or Ruth get really hurt or hurtful with Mykel — but the relationships have to maintain a certain stoic quality relative to the extremity of their material circumstances. In other words, it has to be believable that neither party is going to just go “f*** this” and leave. They have to be committed to getting through the episode, which means they can’t solve the relationship problems too fast by fleeing from situations a younger person would flee from (like, for example, your partner being a crazy person who stirs up killer bees’ nests looking for honey).

There is also a certain poise in the face of death that can grow with age, as well. These are people acquainted with mortality. They rarely totally lose their shit over the possibility they might die soon — they have clearly thought of it before. It doesn’t throw them into a blind panic. Survival entertainment is usually to an extent, power fantasy for those fearing death, but it’s one for which younger protagonists would in this case be iller suited.

Although I guess sometimes it does seem as if these people are 7 years old:

Okay, okay, I guess the real way to make survival TV, as Bear Grylls taught us, is to do stuff with pee. Sometimes it’s all about the classics. 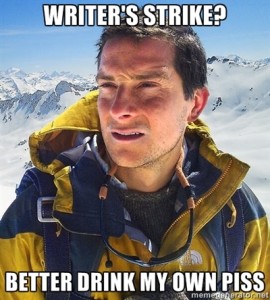