[Did you get Skyrim as a Christmas present? If so, this guest post by Brad Lawrence might resonate with you. – Ed.]

The recently released game Skyrim takes place in a landscape dotted with various cities, with each city sporting its own complement of city guards. These guards are a chatty bunch, frequently offering up unprompted dialogue whenever coming into proximity with the player. As one walks around the towns of Skyrim, guards will complement you on your actions, offer up opinions on the equipment you are carrying or make references to current events. On rare occasions, this dialogue ends up being unintentionally humorous – it’s not unusual to have one guard sternly warning you that any criminal activity will have violent consequences while, at the same time, his partner loudly admits that the swords they are carrying couldn’t cut butter. But for the most part it’s just background noise, something put into the game to make the cities seem more ‘alive’.

Still, there is one quote that seems to have stuck out in the mind of players:
‘I was once an adventurer like you… then I took an arrow in the knee.’

This lament, which is not spoken by any specific character, but can be heard occasionally from practically any generic city watchman, quickly exploded over the internet. Videos appeared online, message boards were taken over by endless references, and as proof that this phenomenon has truly arrived, it even has its own entry on the website Know Your Meme.

It’s not surprising that such a popular game, particularly one whose appeal is strongest among the segment of the population most likely to also frequent the web, inspired a meme. What is interesting though is, why this phrase? Out of the dozens of things that city guards will say, as well as the thousands of sentences spoken throughout the game by various other characters, it is ‘arrow in the knee’ that became an instant success.

The most obvious part of the appeal is that the idea of someone being shot in the knee is funny in sort of a twisted way. First of all, there’s a certain visual aspect to it. Note the word choice here – he took an arrow IN the knee. This calls up images of him standing there, holding his leg, while an arrow shaft sticks out of the joint. Also, although it sounds excruciatingly painful, it’s painful in such an excessively over-the-top way that it borders on absurdity. Humor has often been drawn from portrayals of excessive injury, and this seems to fall into that niche.

What is better - to be born good, or to overcome your evil nature through great effort?

Second, because there is a limit to the number of different things the guards can be programmed to say, but an infinite number of times that their speech can be triggered, the guards will by necessity start repeating each other. Theoretically, every guard in the game will tell you that they have been shot in the knee. This lends an additional layer of absurdity to the quote that most of their other sayings don’t have. While unlikely, it is somewhat possible that every guard in the game truly would be ‘a lot warmer and a lot happier with a belly full of mead’, and that not a single one of them are impressed by your ability to cast a few spells. But the idea that the police force of every single city in the game is made up entirely of former adventurers who all suffered an identical injury is nothing short of preposterous.

However, beyond the humorous aspects lies something else that resonates with players. Each arrow-crippled sentinel is a reminder of the dangers of adventuring, and its subsequent consequences. As brave warriors within the game, we like to imagine our characters as being nearly invincible. If we even consider the possibility of them being killed, it’s always in the midst of doing something glorious, like fighting a dragon or sacrificing ourselves to save a larger groups of people. The idea of receiving a disabling injury and falling into a quiet life in obscurity is a much crueler fate than any we’ve previously considered.

And a cruel fate it is. The world of Skyrim is populated by Nords, a race of fictional people that are pretty clearly influenced by the Vikings. This is a proud warrior culture, one who’s society embraces and glorifies battle. To stand around in a relatively quiet, uneventful city is not the life that most of them would embrace, particularly those who were inclined to become adventurers. Guards will talk enviously of their brother, who is off fighting dragons, while they’re stuck on guard duty. This frustration and thirst for combat is also a likely explanation as to why their response to just about any criminal behavior, no matter how minor, is to attempt to kill the perpetrator. 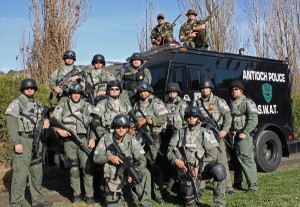 Not only that, but enlisting in the city guard results in a complete loss of identity in the most literal sense. City Watchmen are one of the few ‘generic’ type of characters in the game. Most residents of Skyrim have their own names, homes, and routines. If one of them dies, they’re gone forever. A family member might take over their job duties, but that person will never be truly replaced, and the world’s population is permanently one lower. This is not the case with the city watch, who all dress identically, have no name other than ‘[Name of City] Guard’, and are replaced in the game whenever one dies (apparently there are an infinite number of adventurers out there taking arrows to the knee). This sort of existence would be tough for anyone, but is especially cruel for someone who sought a life of adventure in order to make a name for himself.

Perhaps most troubling is that none of their previous injuries appear to be that serious. Being a city guard is a physically demanding job – they are required to be on their feet all day, walk around the city, and give chase to criminals. Each guard is able to perform these duties without difficulty, but even so, they are no longer capable of going on adventures. The line between well-known adventurer and anonymous city watchman must be razor thin that a seemingly imperceptible loss of ability is enough make the difference. One wonders how many other adventurers suffered the same injury, failed to recognize their slightly diminished capabilities, and ended up in the belly of a monster as a result.

Alternately, it could be that while the guard’s physical wounds have fully healed, psychological ones remain. As I mentioned earlier, getting shot in the knee with an arrow is a horrific injury, one that anyone who had ever experienced would probably go out of their way to avoid suffering again in the future. This could lead to hesitation, and in the heat of battle, hesitation could lead to death. In this light, the guards aren’t necessarily expressing bitterness with how their life turned out, so much as disgust with themselves for what they perceive as a mental failing.

More importantly, this arrow in the knee story affects players on a direct level. It’s not our characters that relate to the guard’s story, but ourselves. We live in world where catastrophic injury is just a car accident or unfortunate fall away. These events occur infrequently enough that we can put them out of our minds, but the injured guard is a reminder of the dangers that surround us in our everyday lives. And the threat isn’t merely physical – in a country where millions don’t have health insurance, and over 60% of bankruptcies are related to health care costs, the disaster brought on from an accident or illness may be financial. The watchman’s lament taps into a deeply buried fear that we’re all one arrow in the knee away from the poor house. 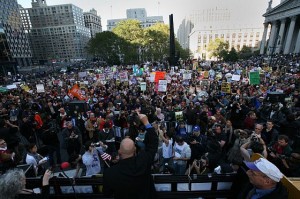 Part of why this makes such an impact is that the injury in question is fairly routine. While playing the game, I’ve been shot with arrows hundreds of times, and it’s a statistical certainty that at least a few of those have hit my character in the knee. Taking an arrow to the knee is an inevitable part of playing the game, just as certain routine injuries, such as twisting an ankle, bumping one’s head, or yes, getting into a car accident, are a nearly inevitable part of ours. Most of the time, like our game character, we’re able to shake off these events without consequences. But sometimes we’re unlucky – the ankle breaks, the bump on the head results in a long-lasting concussion, or the car accident leads to chronic back pain.

The guard who took an arrow in the knee stands out because he reminds us of our own fragility, and the fact that life-changing disaster is a constant reality of the world we live in. And while that’s scary, it also serves as a reminder to appreciate what we have now. This makes it doubly powerful. Remember, he was once like you.

[Are 99% of the soul gems concentrated in the hands of 1% of the jarls? Or does the availability of arthroscopic coverage in the Imperial system render Brad’s observations moot? Sound off in the comments! – Ed.] 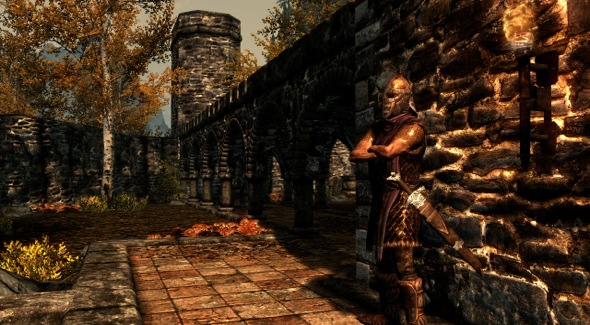 Brad Lawrence disparages old video games at his website Brad Hates Games and daylights as an accountant in Seattle.

10 Comments on “The Impact of an Arrow to the Knee”