The release of the new Muppets movie has a lot of people revisiting Kermit’s classic song, “The Rainbow Connection.”

And rightfully so. It’s a fantastic song. It’s happy and heartwarming, and even a little poignant at times.

But it starts with an odd assumption: that there are already a lot of songs about rainbows, and that we should be familiar with them, in order to ponder the question:

“Why are there so many songs about rainbows/and what’s on the other side?”

Wait. Hold on. Just how many songs are there about rainbows?

Well, there’s “Over the Rainbow,” the classic song from The Wizard of Oz and a staple of the American songbook.

And then there’s… there’s… well, I don’t know about you, but I can’t name any songs about rainbows off the top of my head other than “The Rainbow Connection” and “Over the Rainbow.”

I started to get suspicious. I wanted hard, quantitative data on songs about rainbows. Fortunately, I came across a huge dataset of songs on the Billboard charts from 1890-2011.* With over 38,000 entries, this isn’t the entirety of pop music output during that time, but it’s certainly a highly representative one. Using frequency of words in song titles as a proxy for songs being “about” something, I crunched the numbers…

…and found that there are only 42 (Billboard-charting) songs about rainbows.**

It gets even more disappointing when you compare that to the frequency of other topics of Billboard-charting songs: there are over 3,300 songs about “love,” for example. There are even more songs about “sex” and its variants, e.g. “sexy” (50) than “rainbow(s).” 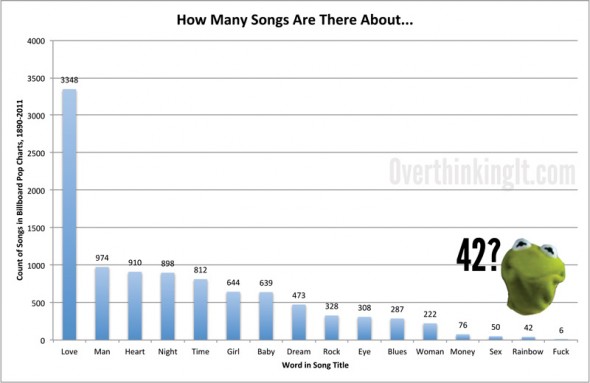 That prompted me to worry that there may be more songs about “fuck” and its variants than rainbows, too, but that turned out not to be the case. Yet. 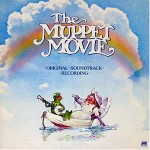 No snarky caption. This is just a great piece of album art.

So it turns out that there aren’t many songs about rainbows after all, much less those that also explore “what’s on the other side.” This may cause us to entirely rethink the meaning of “The Rainbow Connection.” When Kermit claims to hear voices, perhaps it’s not “the sweet sound that called the young sailors.” Perhaps it’s the same delusional thoughts that led him to believe that there are a lot of songs about rainbows, when in fact, there are only 42.

Or perhaps Kermit is tapping into musical traditions outside of the pop music that appears on the Billboard Charts. The lyrics of French medieval ballads could be full of references to rainbows.

This is the most likely explanation, albeit less interesting than the mental illness interpretation. Sound off in the comments if you have any alternative theories!

*The linked article reports on the genesis of the “Whitburn Project,” which was back in 2008. Others have since updated the dataset with more recent songs; hence, the 1890-2011 timeframe. You can download that updated dataset here if you’re curious.

**There are actually less than 42 distinct songs about Rainbows in the dataset. There are only 27 unique song titles; the 42 count includes multiple versions of the same song title (7 for “Over the Rainbow” and “I’m Always Chasing Rainbows” each). I stuck with 42 since the every other data point is for song instances instead of unique song titles.

Update: Here’s the full list of 42 songs about rainbows. Any of these sound familiar?

26 Comments on ““The Rainbow Connection”: Just How Many Songs Are There About Rainbows?”