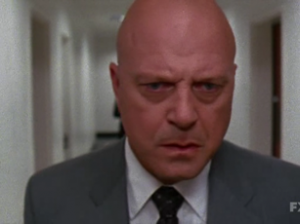 It's time to take the tie off and bust some heads.

On November 25, 2008, the series finale of The Shield first aired on FX. Vic Mackey, the protagonist played by the inimitable Michael Chiklis, was an elite Los Angeles cop leading a special strike team of other elite cops against the most heinous crimes and criminals in gritty aughts-era Los Angeles. For seven seasons, Mackey used extreme measures to break through institutional, political and ethical barriers and get the job done — a strategy that led him on a downward spiral of lies and self-destruction culminating in one of the greatest series finales in the history of television. (SPOILERS FOLLOW.)

In that finale, “Family Meeting,” Vic Mackey received a reckoning for his sins more awful and ironic than anyone expected — three years of mandatory work behind a desk, in a poorly fitting suit, writing and editing reports. On one hand, it was a coup — a plea deal won through deft maneuvering and misdirection that let him off more than easy for the terrible corruption and human cost laid at his feet. On the other, it was a fate worse than death — for a man so defined by his potency and for whom nothing remained but his job, it was damnation.

But those three years are up. On November 25, 2011, three years from the airing of “Family Meeting,” Vic Mackey is free. His debt to society is paid — if not in full, at least to the greatest extent society managed to extract. On this very special Vic Mackey Freedom Day (follow #VicMackeyFreedomDay on Twitter), Overthinking It writers consider what they think Vic Mackey might do when he no longer has to keep his gun locked every day in the lockbox under his desk.

Note: We at Overthinking It love The Shield — many of us would gather to watch it together when in the same city, and we covered the spectacular end of its run on the site. The special podcast we recorded the night of “Family Meeting” is available for listening here. But now, let’s go to our Vic Mackey Freedom Day theories.

Before we launch into theories, I want to expand upon a theme that we touched on in the intro: the harshness of Vic Mackey’s sentence.

The Shield does an excellent job at turning Mackey from a sort of dingy anti-hero to a genuine villain over the last couple of seasons. He’s no longer cutting corners to bring down crooks or robbing gangsters to provide for his family. Now he’s cutting corners to stay out of jail for just one day longer. He’s throwing his teammates under the bus (the most heartbreaking moment of “Family Meeting,” for me, was Gardocki’s disbelieving scream as he realizes Vic has sold him out; yes, more heartbreaking than the other moments).

Given all that, what punishment would be bad enough for Vic? Death’s too good for him; a few moments of pain, then the release of oblivion, doesn’t pay back for all the anguish he’s inflicted. Going to jail’s the equivalent of a death sentence, perhaps, but you suspect that Vic, a fighter and a schemer, could find some way to come out on top. And that’s not acceptable. So what’s left?

How about a fate worse than death? How about a meaningless desk job that you can’t quit without going to prison? If there’s any fate worse for a man who constantly needs action and power, I can’t think of it.

So what’s his fate now that he’s free? I find it easy to imagine that the gang problem in South Central L.A. swells in his absence. Syndicates like the Byz Lats and the One-Niners rebuild their Central American contacts, becoming major players in drugs and guns. The problem escalates beyond Farmington’s limited resources and comes to the attention of federal counter-terrorist forces.

So Vic Mackey walks out of the office on the evening of his third year of (literal) wage slavery and finds a man his age with short blond hair waiting outside.

“Vic Mackey? My name’s Jack Bauer. I’m with CTU. I need your help.” 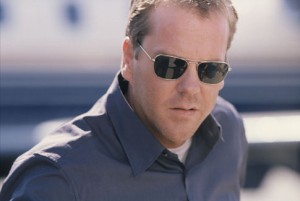 The world has changed a great deal since fall 2008. When Vic made his deal with ICE, the bankruptcy of Lehman Brothers was only two months old, and the acute grip the attendant shock had on the world’s short-term credit markets and global trade had not yet relaxed. Since then, the prospects for a man like Vic Mackey — a middle-aged man with years of specific skills and experience — have changed significantly.

My take is the first cruel fact of Vic’s freedom is he will find it difficult to land a job at a police department — not just because of his awful record and lack of references, but because politics and economic strain have cut back spending and employment by state and municipal governments. Dutch and company on the LAPD have been fighting layoffs these last few years and seeing their overtime and budgets cut back. If Vic were already on the inside, he’d no doubt find a way to take advantage of the tense political environment, but it’s hard to see a way in for a guy who would be so expensive to hire with only a decade or two left of good work in him.

So finding a job in the public sector would be tough, as would finding employment with any large conventional private company, especially full-time private employment with benefits.

It seems natural for Mackey to look into defense contracting — specifically with homeland-security oriented private security companies, especially ones with international operations. America might have rejected the decidedly Mackeyish company Blackwater in 2009, forcing it to change its name to Xe Services — but under its new name, it continues to thrive.

I see Mackey headed to Northern Virginia, where he can work as a global consultant for companies looking for men like him — those willing to do whatever is necessary toward the general goal of fighting threats at home and abroad and the specific goal of ruthless self-interest.

I will not be the last to suggest this: Vic Mackey, Private Investigator. I’ll give you a minute for the goosebumps to go away.

First off, he’s in Los Angeles, the city of Raymond Chandler. It may not be the era of L.A. Noire anymore, but there’s still plenty of capers a gumshoe can get into. Vic knows the streets, and he knows the police department. Hell, he knows the Mayor! If you need to find someone, scare someone, or blackmail someone, there’s no better man in the City of Angels.

Now obviously, he’s made a few enemies. A few thousand enemies. There are lots of people who want to run him out of town, or worse. But Vic was always good at finding allies, and he’s not the type to let people chase him away. I could see Aceveda ordering the police to shut down his detective agency, but I could also see ten ways Vic could fight that. The bottom line is that powerful people have a lot to lose, and Vic doesn’t have anything to lose. All he has to do is get some leverage on the right people, and the cops will back off and let him work. They’re still going to hate his guts, but it would be a lot of fun to see how Vic deals with being a pariah instead of a hero.

Honestly, Vic always reminded me a lot of Mickey Spillane’s ultra-violent detective, Mike Hammer. Hammer seldom let the bad guys live. Sometimes they shot first and he finished the job, but just as often he killed them in cold blood and made sure he had a good alibi. Let me quote from Wikipedia:

While other hardboiled heroes bend and manipulate the law, Hammer holds it in total contempt, seeing it as nothing more than an impediment to justice, the one virtue he holds in absolute esteem.

The police would often threaten to drag Hammer downtown, and sometimes did. But Mike Hammer had good P.R. on his side. The New York tabloids reported his exploits with relish, and the D.A. wasn’t going to come down on him too hard without hard evidence. Hammer was too smart to get caught doing anything, so he got away with everything. That’s the fine line Vic would be walking as a P.I.: he can operate with far more freedom than he ever could as a police officer, but the police are just waiting for him to slip up in the tiniest way.

And there’s one thing that all private detectives have in common: they love to have casual sex with a wide variety of femme fatales. Vic got his share of action during The Shield, but basically he tried to be a devoted family man. No more. Vic Mackey, Private Eye would be sleeping with every nightclub singer, heiress, mob boss’s daughter, sexy pool shark, doe-eyed librarian with a thing for bad boys, hooker with a heart of gold, blonde lawyer who should be smart enough to know better, and (of course) secretary in town. Every single case will involve him bedding at least one bombshell.

I want this to be a series, immediately. C’mon Shawn Ryan, nobody is watching The Chicago Code. Give us Vic Mackey, P..I.