Disney Week is NOT OVER!

It’s been a long time since I wrote a standalone piece for Overthinking It (ask me about my hiatus at fenzel AT overthinkingit.com). I wanted to pitch in on a Think Tank ordering the Disney Princesses from most admirable to least admirable, when I realized I had something I wanted to share with you on its own (and my triumphant return to writing, and not just podcasting, for the site).

As for the Disney Princess ordering, I internally debated whether Pocahontas went at the top or the bottom of the list when I realized I didn’t care. And here’s why: 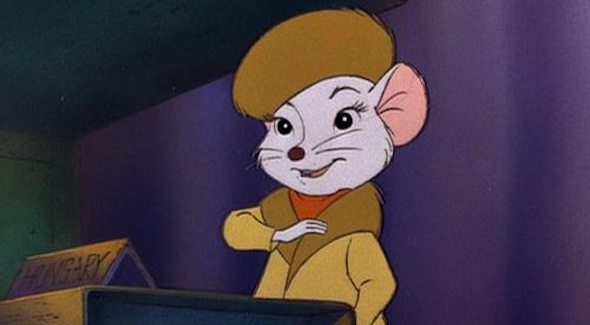 As far as I’m concerned, any conversation about admirable characters in Disney cartoons has to start with The Rescuers, and any discussion of admirable female characters in Disney animated features has to start with Miss Bianca. Miss Bianca is the Hungarian delegation to the Rescue Aid Society, a non-government organization founded by mice in Ancient Greece that, among other things, fights human trafficking, poaching, and child abuse. Their headquarters is in the shadow of the United Nations on the east side of New York City, and they appear to be the most single-minded, cooperative, and earnest international organization for the greater good in history.

Miss Bianca’s nationality is notable because, when The Rescuers was made in 1977, Hungary was a Warsaw Pact nation living under Soviet domination, still struggling with poverty and oppression in the aftermath of the failed 1956 revolution. Given her status as an international diplomat of sorts, as well as her obvious wealth — as shown in very tiny bottles of very fancy perfume — and no sign of interference from the pro-Soviet Hungarian Socialist Workers’ Party, Miss Bianca is most likely an emigre or living in exile, leaving her home country to swear her fealty to an organization to help the helpless and serve the greater good.

From the way their society hall is organized, it is apparent that least some of the function of the Rescue Aid Society is parliamentary as well as operational- that it deliberates policy and supervises a large infrastructure of informants, birds, and other related resources to help them execute on their decisions. Miss Bianca is clearly prominent in this organization from her place of honor at the meetings.

However, unlike the United Nations, when the Rescue Aid Society needs to go, say, rescue a little girl from slave labor at the hand of diamond smugglers, the delegates go themselves, flying on the backs of albatrosses, to physically extract the targets and return them to safety.

So, Miss Biance is a Cold War refugee/freedom fighter who helps run an international organization with the loftiest and most admirable aims ever, and when the situation calls for it, she personally flies anywhere in the world to conduct commando raids, despite being effectively unarmed, and a mouse in a world full of humans.

In a historical, representational sense, The Rescuers asks, “What if, in addition to our institutions that look after the interests of the powerful, we had another, better institution the that looked after the interests of those nobody else looks out for – the truly helpless, the truly desperate, those in the direst of straits and the most grim of circumstances? What if the whole world got together and did that? And what if they were mice?”

The wold Miss Bianca is saving these children from is truly horrible. The scenes where Penny has to climb out of the cave before the tide rushes in are some of the scariest I ever saw in movies as a child. This isn’t a rose-colored faux-war against “the other” told in musical numbers with Eddie Murphy –

…Penny has to deal with legit, starchy, but played-straight child abuse.

In a figurative, artistic sense, The Rescuers asks, “What if you took the warping and distorting childhood horror and trauma at the heart of every Stephen King novel, and you put it in a cartoon, and you fixed it? What would it take?”

It’s like looking for a needle in a haystack, when there really is no haystack, but really just a big pile of needles.”

What would it take to overcome that?

It would take courage, but also kindness. We would have to be as mice — think of ourselves as small — see in the suffering child our own potential helplessness — be the mouse taking the thorn from the lion’s paw.

The Rescue Aid Society is a shadow United Nations that represents what we might be — the unattained potential for good — the hope of salvation — the dream of a Rescuer.

Miss Bianca is a bit materialistic, a bit heteronormative, and yes, she is a mouse that wears fur (which is badass as well as creepy, if you ask me, but nobody did), but she is pretty much the awesomest person/mouse ever. Calling her to task for caring for enjoying luxury seems inappropriate given her life of sacrifice and the huge risks she so casually makes on behalf of the people who need her. She seems virtually fearless in the face of near-certain death (until actual certain death comes around, then she gets a little scared), and inspires courage and hope in all around her.

As so many, she too has a stupid love-plot where she sells herself a little short (heh mice) for a schlubby janitor. But she’s always the high-status person in the relationship, and she does seem to actually like him, so I’m not so sure it’s quite so bad to engage in some relationship choreography. Oh, and he also turns out to be the Will Hunting of janitors-turned-rescue commandos, so maybe she is just a good judge of character.

Oh, and she flies over New York city with Bob Newhart on the back of a talking bird, and if that’s not your dream I don’t know what you’re eating before bed.

I’ll add that Disney Princesses often have trouble reconciling their beauty with their personal agency — prettiness is normative and demands certain things of the people who have it. Miss Bianca is very attractive for a mouse (It’s implied by the narrative! The narrative!), but she is also very accomplished and capable, and she is able to have and enjoy the former sincerely without it too seriously impacting the latter.

And in The Rescuers Down Under, which isn’t quite as sophisticated as The Rescuers, Miss Bianca also shows she is mature enough to handle the presence of a mouse (kangaroo rat?) she is clearly attracted to, with that attraction being troublesome, but not some horrible huge sin. Yeah, it causes anxiety for Bernard, but Bianca shows an emotional independence from Bernard that almost no Disney Princesses shows without forcing themselves to do it. She’s much more emotionally mature and nuanced than a lot of other Disney characters.

The Princess is in Another Castle

Belinkie asked me about what it means that I attributed greater humanity and a greater degree of admiration to a Disney mouse than to a Disney Human Princess.

To me, iconography in cartoons is a major factor. The main point of a cartoon is to use animation and a reducing, simplifying visual style to offer easier-to-absorb representations or presentations of characters or ideas. This doesn’t necessarily mean the underlying ideas are simpler – in fact, cartoons can approach very complex ideas by making it easier for the brain to process the elements. Cartoonish character design tells you a lot about the characters before you even speak, because the visuals – the shapes, the colors, the style of movement – tell you a lot about the character before you meet them (a lot of triangles usually means mean or aggressive, a lot of circles usually means friendly, a lot of squares means strong). 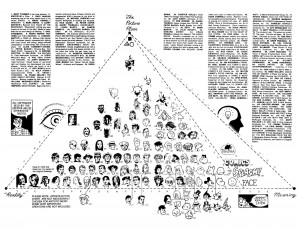 Scott McCloud's Understanding Comics is a seminal work of Overthinking, and I recommend it as fiercely as I recommend any work of criticsm.

You can use cartoons to articulate complex ideas, but the simplification has to happen somewhere. The Disney cartoons that depict animals are often more representational and dramatic than their cartoons depicting humans — perhaps because using animals gives the cartoon that extra space for stylistic removal from reality that otherwise you would get from simplifying the character design or depiction of the human. A simplified mouse that serves as a metaphor for a human is less reductive of a human than a simplified depiction of a human. A lot of feminist thinking is around the idea of “objectification” – and that’s kind of what cartoons and puppets do – represent people as objects – except when they represent them as animals.

But yeah, Perdita, Lady, Nala, Bianca, Bambi’s mom, all of these characters are richer, more textured, and “fairer” per minute of screen time than Belle, Ariel, Jasmine.

To Sell, and to Be Sold

“Disney Princess” isn’t a tool of the stories, it’s a marketing designation, which to me says it refers to the way mothers see their daughters and girls see themselves in an “anxiety relievable by purchase” sense. That is, you dress the girl up with a Disney Princess backpack because you want to assign value to her — you want her to see value in herself, you want to reflect the value you see in her to everybody else. The anxiety is that other people will not appreciate her value and she’ll be a mundane, unremarkable, unvalued person.

This anxiety runs afoul of a belief in the inherent dignity of humanity — if you are worried that if don’t identify yourself or your daughter as special, then people won’t value her enough, that tells me you don’t sufficiently value people who don’t self-identify as special or whom you don’t identify as special – and that you’ll cling to whatever you think makes you special out of the fear that if you lose it you will be normal and therefore not good enough.

Being defined by romantic love here is a form of requiring external validation — that you aren’t good enough just being you. This is also why Mulan fits in as a princess despite not being a princess – the archetypical Mulan Princess (as in, somebody who identifies with Mulan, Disney Princess and dresses in her schwag — not just somebody who likes the movie or character) isn’t comfortable with the role society wants to give her, so she denotes herself as special by challenging society, which turns out to show a lack of respect for people who aren’t sufficiently iconoclastic – which isn’t the most sincere way of going about fighting for social justice  – if that’s what you say you are fighting for (Mulan was just fighting the Huns, right? She was one imperialist against other imperialists?)

They can solve all this by making Rosasharn Joad a Disney Princess, including a Grapes of Wrath animated feature and a breastfeeding doll with old man accessory.