While 1989’s The Little Mermaid was a game-changer in many regards, the folks at Disney continued to fill the tried-and-true trope of the anthropomorphic animal friend. Mermaid gave audiences a triple dose with Flounder, Scuttle the seagull, and Sebastian the crab. While Flounder and Scuttle remain Ariel’s chums (pun intended) from the first frame to the last, Sebastian plays a more complex – and ultimately far more important – role.

Throughout the film, Sebastian acts as music maker three times. “Daughters of Triton” is abruptly stopped after only a few seconds due to Ariel’s absence; yet what we do hear is the film’s only evidence of Sebastian’s output as King Triton’s official court composer. “Under the Sea” follows, wherein Sebastian extols the virtues of staying beneath the surface of the water in order to quash Ariel’s rebellious spirit. Sebastian lends his voice once more to “Kiss the Girl” as he convinces Prince Eric that the mute redhead he’s been seeing is a sure thing. 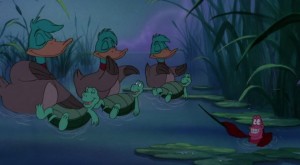 In each of these three songs, Sebastian has a motive: impressing Triton and getting on his good side; keeping Ariel underwater (and therefore not making Triton angry – again, kissing up to the king of the seas); and getting Ariel the kiss of true love. It is only in the third song, “Kiss the Girl,” that Sebastian’s goal is realized: Eric and Ariel lean in for a kiss, and we can presume that they would have gone through with it had Ursula’s crony eels not tipped over the lovers’ canoe. In the cases of “Daughters of Triton” and “Under the Sea,” Sebastian’s underlying motives are never met. Ariel’s failure to appear in her enormous clam shell ruins the first song’s performance and infuriates Triton, while we see her getting bored and simply leaving in the middle of “Under the Sea.”

What is it about Sebastian’s first two songs that falls flat where the third succeeds? After all, aren’t the lyrics to “Under the Sea” just as earnest as those in “Kiss the Girl?” The secrets to his failures – and eventual success – lie largely in the music itself.

Giving Sebastian the title “court composer” aligns him with such names as Haydn, Bach and Josquin, and he knows it. From the start, we see that Sebastian takes himself too seriously: his entrance to court is juxtaposed as laughable against Triton’s grand appearance. 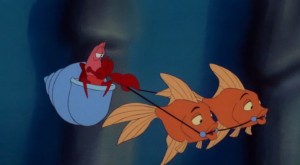 The 40 seconds we hear of Sebastian’s musical offering “Daughters of Triton” drips with pretense and artifice. After an introduction by a fish orchestra, the sisters introduce themselves by singing quick, virtuosic vocal figurations. The whole production is overly-complicated and overblown, remarking on stereotypes about the pretentious nature of classical music.

But let us not blame Sebastian for trying to win Triton’s favor by taking on the role of ass-kissing show-off. After all, he is a foreigner: among all of the film’s main characters, Sebastian’s Jamaican accent sticks out badly in a sea of Americans, his “ting”s and “dere”s removing him from the rest of society with their “thing”s and “there”s. Somewhere along the way, he decided that the key to Triton’s good side is assimilation; thus, he neglects his apparent heritage and does his damnedest to compose like a white European. Though the crab’s efforts are made in earnest, it’s really no surprise that Ariel finds his music stuffy, boring and forgettable – hence her neglecting to show up. Sebastian’s attempt at effectiveness through assimilation and pretense fails.

When the time comes for Sebastian to deliver “Under the Sea,” he has learned that European classical virtuosity is not the most effective musical tool he can use to reach Ariel. He replaces serious classicism with show tune poppiness, adds instruments like steel drum and bass guitar, and sings with his own voice rather than relying on the vocal acrobatics of Ariel’s sisters. The song leaves the gloomy cloisters of European musical tradition for the sunny carefree attitude of the Caribbean, as Sebastian embraces his accent and the music of his apparent home.

It’s a step in the right direction, but unfortunately he’s overcompensated. While it’s difficult to define “traditional” Jamaican music, “Under the Sea” is undoubtedly not part of it. What Ariel is given is a sort of Americanized approximation of Caribbean music; an ersatz compilation of elements that, while certainly catchy, would probably make Bob Marley weep openly. Ultimately, it is the song’s affected lack of authenticity that causes Sebastian’s message to become lost.

Immediately, the fact that this song is a calypso creates a sense of inauthenticity. Calypso historically evolved from African folk music in Trinidad, not Jamaica. If Sebastian wanted to impress Ariel with his Jamaicanness, reggae or ska would have better suited his purpose. Presumably, a proud Jamaican would be cognizant of this distinction rather than taking Sebastian’s “all Caribbean cultures are basically the same” approach. Still, “Under the Sea” does try very hard to be a calypso; that’s clear immediately from the score’s tempo marking of “Buoyant calypso beat.” It also follows Grove’s description of “verses [that] are witty and humorous and philosophize, teach and appeal to the social conscience.” True calypso, like Sebastian’s song, often employs an accessible melody and happy sound to convey a somewhat serious message. Unfortunately, the similarities end there.

Most of “Under the Sea”‘s other attempts at calypso elements make the song less like an extract from Trinidadian Carnival and more like a track on an American-produced My First Calypso album (I imagine a commercial for this album, with rich white kids wearing floral shirts and leis dancing between inflatable palm trees).

For the sake of comparison, consider this song by Mighty Sparrow, the so-called King of Calypso:

One of the most striking differences between “Wood in de Fire” and “Under the Sea” is the former’s overall chill attitude. While certainly upbeat and danceable, the vocal and brass lines are smooth and legato, giving a sense of laid-back effortlessness. Sebastian’s song, however, is rigidly clean and precise, as though he is trying too hard to get it just right; it’s Mighty Sparrow plus Adderall and jazz hands.

This lack of chillness translates to “Under the Sea” on numerous musical levels. While calypso’s ubiquitous steel drum is present, it sounds almost too clean – perhaps even synthesized – and the eventual entrance of a full orchestra makes the steel drum seem like the novelty instrument added to lend the song a piquant Caribbean flavor. The hand claps at the end of bar 2 are almost certainly synthesized; it’s hard not to imagine a robot programmed to clap AS LOUD AS POSSIBLE PRECICELY ON THE SECOND TWO OFFBEATS OF THE BAR.

Speaking of percussion, listen again to the drums in Mighty Sparrow’s song and notice how they create a dense layer that supports the melody. The drums in “Under the Sea,” however, are sparse, while other percussion instruments (marimba and steel drum especially) are used more melodically than rhythmically. Furthermore, Mighty Sparrow’s drums make heavy use of the classic calypso rhythm (listen to the cymbals):

The syncopated short-long-short motive, shown boxed in above, is the basic tell-tale ingredient of this beat. While “Under the Sea” does contain a trace of this cell here, it is interrupted by a rest. 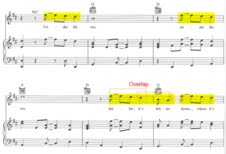 Furthermore, the entire song does not seem to contain an instance where the cell appears more than once at a time. A much more prominent rhythmic motive in “Under the Sea” is just the opposite of the above: long-short-long. It happens at the end of verses and, importantly, overlapping throughout the majority of each chorus.

It’s during the last break that Sebastian really loses it. As the bastardized calypso rhythm repeats over and over, Sebastian revels in his cleverness and ability to rhyme fish names with instrument names. Among the musical sea creatures on this list, there is mention of a harp, Cole Porter’s “Begin the Beguine,” and a fluke (the duke of soul) who is a caricature of Cab Calloway. None of these has anything to do with calypso. 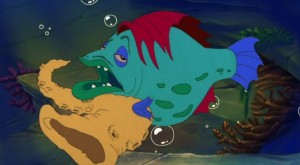 Sebastian becomes so wrapped up in himself that Ariel is able to leave completely unnoticed, put off by his overzealous attempt at authenticity.

While “Under the Sea” has succeeded in being a catchy and enjoyable song (in the film and in real life), it has failed as an effective tool for conveying a message. By trying too hard to impress, Sebastian produces an exaggerated, over-the-top rendition of calypso. This betrays his selfish ulterior motives and ultimately causes his downfall.

Fortunately, he has a change of heart when he realizes that Ariel’s dissatisfaction is legitimate and that she’ll only be happy with Eric. After finally deciding to help her rather than hold her back, Sebastian uses music successfully with “Kiss the Girl.” This song strikes the right balance between sincere soulfulness and the Broadway extravagance that is the crab’s wont. By being true to himself, even on a musical level, Sebastian finally gets his message across.

His previous failures, though disappointing, provide the impetus for him to change. All told, this makes Sebastian a much deeper character than Flounder or Scuttle. More importantly, though, Sebastian gives (well, really Alan Menken and Howard Ashman give) the audience some great songs, authentic or not, that are still beloved more than 20 years later.

Daniel Batchelder is pursuing a PhD in musicology in order to become a professional music geek. He is mostly unashamed about his love for Disney music. 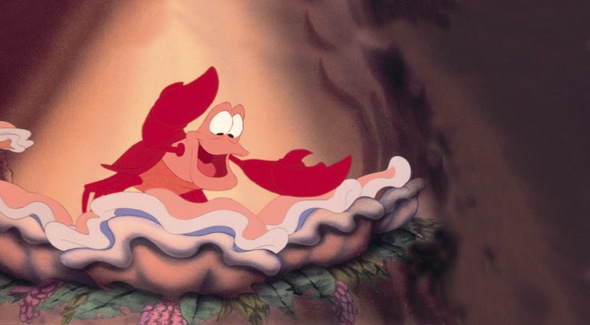 [What’s the verdict, Overthinkers? Is Sebastian a sellout in a white fish’s world? Or is he going along to get along? Sound off in the comments! – Ed.]